East Otto Cemetery is also known as East Otto Union Cemetery. It is located east of the East Otto State Forest in Cattaraugus County. It has a little over 1,500 interments.

This cemetery has a pair of ghost women with an ax wielding man chasing them. The women scream as they are being chased by the madman, but strangely enough their heads have already been cut off ... not quite sure how they are still screaming.

Elmlawn Memorial Park is located on Delaware Avenue north of Sheridan Drive in the town of Tonawanda in Erie County. There are over 17,000 interments here.

Drivers passing by the cemetery between the hours of midnight and 3:00 a.m. have reported seeing various colored lights and orbs floating around in the cemetery.

There is a legend connected to the nearby church that a young woman was killed on her wedding day by being run over by a carriage as she was stepping into her own carriage. She is seen crossing the street at night.

Whitehaven Cemetery is on Grand Island in the Niagara River in Erie County. It was started in 1865 and has around 1,000 interments.

There are several ghosts reported to haunt this cemetery. There is a young girl that was buried here and her tombstone glows. She hasn’t actually been seen in the cemetery, but she is said to haunt a nearby hotel. The room is no longer used because occupants complained of getting phone calls in the middle of the night and all they could hear was a little girl laughing.

Another ghost here is that of a soldier that died in the Gulf War. Research shows it could possibly be Scott N. Vigrass. He was a Private First Class in the United States Army and died December 9, 1990 in the Persian Gulf. He is said to be seen just walking around the cemetery. The legend is that he is looking for his pregnant wife.

Another ghost is of a young mother who died from AIDS in the early 1990s. She is seen sitting on her tombstone holding her baby boy.

Cold Springs Cemetery was established in 1840 in Lockport in Niagara County. It was listed on the National Register of Historic Places in 2004. It has over 8,000 interments on about 52 acres.

One ghost here is that of a young girl who was hitchhiking and was murdered by the man who picked her up.

The Paranormal Ghost Society reports there are many unseen and unidentifiable things moving around here. The cemetery is completely surrounded by hills, woods, and a wall. It gives the feeling of being trapped. The layout of the graves appears to be very random as you can see in the photo.

The whole place just “feels” haunted even when nothing in particular is seen or heard.

Eastern Side of Holy Sepulchre

Western Side of Holy Sepulchre

Founded in 1871, Holy Sepulchre Cemetery is a Catholic cemetery and the largest in the city of Rochester. Located in Monroe County it sits on 332 acres and has nearly 300,000 interments.

One of the famous people buried here is Francis Tumblety, better known as murder suspect Jack the Ripper.

Other famous people include politicians and professional baseball players.

Dark shadows that appear to be women are seen here. In the children’s area white figures are seen moving about.

Riverside Cemetery is a 68-acre cemetery in Oswego County established in 1855. It was designed by landscape artist Burton Arnold Thomas and has been on the National Register of Historic Places since 1993. It has around 13,000 interments.

There is only one known haunting here. There is a large pond located toward the back of the cemetery. Many years ago a little boy drowned in the pond and he is often seen playing in the area.

Woodlawn Cemetery is located in Syracuse in Onondaga County. Established in 1881, it has over 8,000 crypts and close to 30,000 interments.

This cemetery does not have a specific ghost. There is a glowing white ghost, sex undetermined, that will chase you if you wander through the cemetery at night.

Saint Agnes Cemetery is an extremely old graveyard with some burials having taken place in the 1700s. The only existing records show the first burial in 1841. There is no way of knowing exactly how many graves are here, but it is speculated to be over 10,000. There are about 1,700 documented interments in this Oneida County cemetery.

The spirit here is a very young girl seen walking through the cemetery following a crawling ghost baby.

There were two murders in September of 1909 committed by a man named Theodore Rizzo. He lured a seven-year-old girl, a six-year-old girl and her little two-year-old brother into the woods. When he tried to do inappropriate things to the two little girls they threatened to tell their parents and he shot them all. The oldest girl survived and eventually identified the killer. The younger girl and her little brother both died slowly, the sister trying to help her baby brother. Apparently, she is still watching over him. 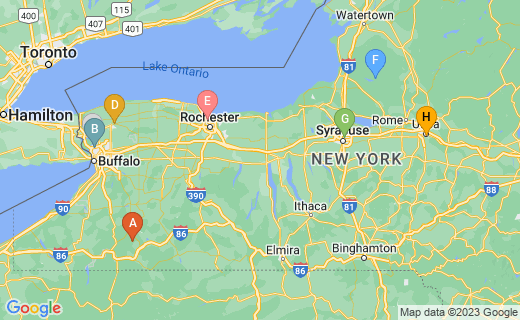 Prospect Hill Cemetery is a large cemetery in Gloversville in Fulton County. It has over 5,000 interments.

There is one known ghost here. She is dressed all in white and was seen as early as July of 1874 when workers at a nearby marble-cutting shop saw her walking toward them. They ran into their building and then out the back door. She was waiting for them, wanting to know where her children were.

By now a crowd had formed and one of the men who saw her first pulled out a gun and shot her. Of course, that had no effect. She walked back to the cemetery with the crowd following and then simply disappeared.

Albany Rural Cemetery began October 7, 1844 in Menands, just outside of Albany. It covers more than 400 acres and has over 38,000 interments.

There are many ghosts haunting this particular cemetery. One is a female hitchhiker wearing her prom dress. She is seen in the cemetery itself and on nearby roads.

There’s also an older woman with gray hair. Her body was found in a nearby lake. She is seen walking around with an air of sadness about her.

Mrs. Mary Douglas Scott is also here. She actually died in the cemetery after committing suicide by drinking arsenic.

Another ghost that committed suicide is Mrs. Anna T. Osterhoudt. She was so grief-stricken that she shot herself at her husband’s grave.

Not all the ghosts here are human. There is a horse that died after running through the cemetery and striking his head on a large monument. He can still be seen galloping in the cemetery.

Oakland Cemetery was originally used to bury Revolutionary War soldiers in 1783 and was called St. John’s Burial Grounds. It was changed to Oakland Cemetery in 1875. It is in Yonkers in Westchester County and has approximately 3,000 interments.

The cemetery has had a big problem with vandalism even though a caretaker lives on site. There are supposedly three ghost women who come down from the hill to chase away vandals. There is a reported photograph of the three women taken in 2006.

Green-Wood Cemetery was established in 1838 in Brooklyn in Kings County. It has over half a million interments on 478 acres. It is on the U.S. National Register of Historic Places and is a U.S. National and New York City Landmark.

Some visitors to the cemetery never see any ghosts here unless they take photographs. When the photos are processed, that’s when the images appear.

There is one ghost that is seen roaming around the cemetery on a regular basis. Her name was Mabel Douglass. She disappeared on Lake Placid and when her body was discovered thirty years later her body was petrified and completely intact.

Bayside Cemetery is in Ozone Park in Queens County. Established in 1865 it sits on 12 acres with around 35,000 interments. The upkeep of the cemetery began to fail in the mid-1900s with quite a bit of neglect and vandalism. The Community Association for Jewish At-Risk Cemeteries undertook a restoration project which was completed in 2012.

This cemetery does not have any named ghosts, but it is definitely haunted. The trees here even seem to be haunted. They grow in twisted, mangled shapes that do not look natural.

People who visit here during the day or at night report a strong feeling of being watched. Some have even experienced stomach pains. There is a feeling of someone standing next to you even when you are alone. Occasionally there is a sudden stench so putrid it brings tears to your eyes.

There is sometimes a ghostly fog that hovers over the entire site and various unexplainable sounds are heard such as talking, laughter, and crying.

Baron Hirsch Cemetery is a Jewish Cemetery covering about 80 acres. It was established in 1899 and named after German Jewish philanthropist, Maurice de Hirsch. Located on Staten Island in Richmond County, it has about 8,000 interments.

There are no known ghosts here. There are a lot of ghosts, they just won’t stay put. People who live in nearby neighborhoods claim to see the spirits wandering in their yards and up and down the streets. They are not happy about it but don’t know what can be done. 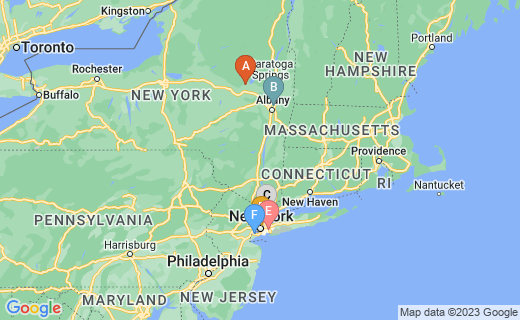