A Little About North Carolina

There are 34,627 named cemeteries in North Carolina and many more family and unnamed graveyards across the state. With such a long history I expected to find many more haunted cemeteries but was surprised to find only 17. Here are eight of the spookiest.

Riverside Cemetery was established in 1885 and was originally called the Asheville Cemetery. Sitting on 87 acres beside the French Broad River, it is still an active cemetery with over 13,000 interments, 12 family mausoleums, and 9,000 monuments. The earliest burials were around 1800 and authors Thomas Wolfe and O. Henry are interred here. It is in Asheville in Buncombe County.

In 1865, the Battle of Asheville was fought about a mile away. Visitors to the cemetery claim to hear gunshots and see members of the Confederate Army marching in that direction.

The Piney Grove AME Zion Church was built in a small African American community in 1900 in Concord, Cabarrus County. In the late 1990s, the church was abandoned for some unknown reason. Everything was left in the church. The congregation just left and never came back. The cemetery has 35 interments dating to 1901.

There have been reports of at least four separate ghosts haunting the church itself. Investigators have found strong evidence of entities still inhabiting the church. The church was torn down after heavy vandalism.

The cemetery does not have a named ghost, but there are many entities here. Pictures have been taken showing faces without bodies.

The Henkelite Cemetery is also known as the Lutheran Union Church Cemetery. Located in Mount Pleasant in Cabarrus County, it has 46 interments dating back to 1825. There are several Confederate soldiers buried here.

There have been reports of the sounds of gunfire and soldiers marching. These only occur at night. Some people claim to have seen Confederate soldiers apparently guarding the cemetery. Pictures taken here during the day of tombstones have shown children playing after they were developed. At least six children are buried here.

Vehicles failing to start when leaving the cemetery is a common occurrence.

Located in Lumberton in Robeson County, Meadowbrook Cemetery has a little over 3,000 interments dating back to 1800. A governor, a congressman, and soldiers from the War of 1812, the Civil War, the Spanish-American War, and World Wars I and II are all buried here.

The ghost here is a young woman named Claire Townsend. She died sometime in the early 1900s on her wedding night and is frequently seen strolling through the cemetery at night. There is no record of Claire Townsend on findagrave, but a local of Lumberton says her monument is on the first row if you enter the cemetery by the tire shop, make a left, and then it is on the right.

The Old Smithville Burying Ground was established in 1793, but there are graves dating back to 1786. Located in Southport, originally called Smithville, in Brunswick County, there are 1,093 interments on two acres.

There is at least one ghost here. Antonio “Tony” Caseletta immigrated to New York with his wife and child and then moved to Wilmington, North Carolina about 1880. He started working as a musician at the Old Brunswick Inn, originally called the Brunswick Hotel, in Southport. On August 22, 1882 Tony was drowned in a freak boating accident near Battery Island. Singing Ghost Tony still hangs out at the Old Smith Burying Ground and the Old Brunswick Inn.

Cedar Grove Cemetery was established in 1800 in New Bern in Cravens County and occupies 13 acres. It was added to the U.S. National Register of Historic Places in 1972. There are several famous people among the 7,000 interments including eleven Congressmen, Pepsi inventor Caleb Bradham and Confederate General Robert Ransom, Jr.

There is a very strange legend here called The Weeping Arch of New Bern. There was a yellow fever epidemic in 1800 that started the Cedar Grove Cemetery when The Christ Church cemetery could not hold any more bodies. In 1854 a wall was built around the new cemetery with an arch at the entry.

The arch was constructed from shell stone which was quarried nearby. Shell stone is comprised of sea creature fossils and seashells. When people walk through the arch it either “cries” or “bleeds” on them. The “tears” range from a rust-tinted water-like substance to a deep red thick substance. The legend is that if a pallbearer gets hit with one of these mysterious droplets, he will be the first to die of the pallbearers.

The arch doesn’t only cry during funerals. People who have gotten the strange liquid on their clothes say it washes right out and doesn’t stain.

There have also been reports of the devil himself being seen here!

Saint Barnabas Episcopal Church Cemetery is located in Snow Hill, population 1,614, in Greene County. There are 500 interments dating back to 1850.

The legend here is in regard to two young lovers. The girl died from an unknown disease and then a couple of years later the young man died of a broken heart. Their graves are unmarked.

The story goes if you run around the church ten times without stopping you will see the young lady on her knees at her boy friend’s grave weeping aloud. The young man is standing behind her. If he sees you, he will chase you.

Oakwood Cemetery was established in 1869 in Raleigh in Wake County. Covering 102 acres now, the original two and half acres were donated by Henry Mordecai in 1867 for a burial ground for Confederate soldiers. There are nearly 17,000 interments here.

Paranormal investigators made a trip to the Oakwood Cemetery in early October 2015. One of the members felt a sharp sting on his neck. Another member looked at his neck and said it looked like he had been pinched.

A female investigator who had visited the cemetery before said that was a common occurrence and that she’d personally had her hair pulled several times.

Photographs taken here revealed several different colored orbs and one picture has what looks like a spirit peeking around the side of a Confederate soldier’s tombstone. Battery-operated equipment also went dead very quickly.

There is a legend here called The Spinning Angel of Oakwood. She has also been referred to as The Guardian of Oakwood or The Ratcliffe Angel. Supposedly, every Halloween at exactly midnight the angel’s head will spin around 12 times. It is also rumored that people have noticed the angel’s eyes following them as they moved about the graveyard. 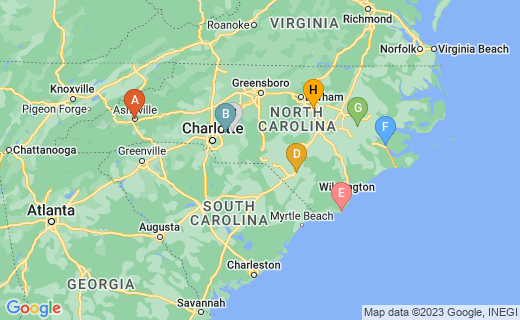