Restland Memorial Park is also known as Restland-Lincoln Memorial Park. It serves Monroeville and other outlying cities of Pittsburgh. There are over 3,000 interments here.

There is a female ghost here nicknamed Walkin’ Rosie. She is often seen strolling through the cemetery during the evening or the early morning. Some people say it is a young girl and some say it is a young woman. It is possible that they are two separate ghosts.

A paranormal investigator to the cemetery heard unseen children playing Ring Around the Rosie. He said they seemed to be having a wonderful time.

There is also a little girl here that seems to be attracted to other children. She is seen wearing farm clothes from the mid-1800s. She peeks out from behind a tree and waves at other children, sometimes saying “Hello!”

Many orbs have been seen here and have been captured on film. Strange mists also appear and there have been many EVPs (Electronic Voice Phenomena) captured on tape.

St. Patrick’s Cemetery was established in 1866 and serves Oakdale and North Fayette Township in Allegheny County. There are over 1,200 interments, the oldest marked grave is of Michael Joseph Dougherty from County Donegal, Ireland, who died at age 32 in 1872.

Paranormal investigators visited this cemetery in 2003. They reported an incredible desire to leave as soon as they entered. In some spots they had a shortness of breath and a heavy feeling in their chests. They also wandered through some very cold spots.

Another group of investigators claimed to have captured EVPs of children playing peek-a-boo and laughing. There were also some undefinable growling noises, possibly an animal.

Madonna Cemetery was established in 1922 in Union Township (also known as New Castle), in Lawrence County. There are around 1,500 interments and the cemetery is still in operation.

The legend here is about the grave of Stanislaw Krowiak (1878-1927) His tombstone has a picture of him appearing to show him with one white hand and one black hand. Supposedly, if you cover the monument with a bed sheet at midnight before Halloween Day and then knock three times on the tombstone Stanislaw will appear behind you.

There have not been any reports of other common paranormal occurrences such as cold spots or mists and orbs.

The Snyder Family Cemetery is located near West Liberty in Butler County inside the Moraine State Park. There are 20 interments here, but only four tombstones remain.

There are many stories here of a pair of red eyes that chase people out of the cemetery and one of the smaller graves has a green light emanating from it.

Brady’s Bend Cemetery is located in East Brady in Armstrong County. There are almost 2,000 interments here dating back at least to 1816.

There are no known ghosts here, but the usual paranormal phenomena do occur. Strange noises are heard such as disembodied voices, running or walking footsteps, strange fogs, mists, smoke and a blue haze that appears to follow visitors as they move through the cemetery.

Baughman Cemetery is located in the town of Tyrone in Blair County. There are almost 600 interments dating as far back as 1839 if not farther. The cemetery is basically in the middle of nowhere with a dirt road encircling it.

If you go up to the cemetery on nights with a full moon you can see what appears to be people hanging from the trees.

On windless nights, the wind blows only in the graveyard.

There is at least one ghost here. A misty person, sex undetermined, rides a white horse and will chase you from the cemetery.

Fallbrook Cemetery is located in Tioga County. The Fall Brook Coal Company had set aside some land for a cemetery in 1852. The first burial was of Humphries Brewer, the manager of the company, in 1867. There are around 130 interments here, many of them children who died from the bubonic plague in the 1800s.

The common paranormal events associated with this cemetery are screams, becoming suddenly very windy, and several reports of ghost children running around.

The ground has settled over the many years and it appears that the caskets are coming out of the ground.

The Wilkes-Barre City Cemetery is located in Lucerne County adjacent to the Hollenback Cemetery on the banks of the Susquehanna River on North River Street. Both cemeteries were severely damaged in the flood of 1972. Most of the tombstones are missing, damaged, or illegible. There are over 16,000 interments here.

Paranormal investigators, Nepa Paranormal, visited this cemetery in the daylight hours. They photographed what appears to be a face in a purplish haze. There was also another photo of a localized white mist.

They recorded several EVPs. One of the members asked the question, “What is your name?” The answer sounded like “Who?” The second question was “Do you know what year it is?” The answer was, “Somebody’s after it.”

Visitors have claimed to see the ghost of an old man who seems to be searching for something. There is also an entity of some sort that seems very angry, but doesn’t have any human features.

St. James Episcopal Churchyard, located in Bristol, is one of the oldest cemeteries in Bucks County. There are around 1,000 interments dating back to the early 1700s. The oldest still legible is that of George Gillespie (1671-1721).

There are supposedly many ghosts here. Legend has it that one of the ghosts was a witch when she was alive. Beside the tombstone of Merrit P. Wright (1866-1911) sits an iron chair called The Witch’s Chair. His wife, Sarah, had the chair put there so she would have a place to sit when she came to visit. The legend says that if you sit in the chair right at midnight any time during the month of October, you will feel the arms of the ghost/witch wrapping around you. 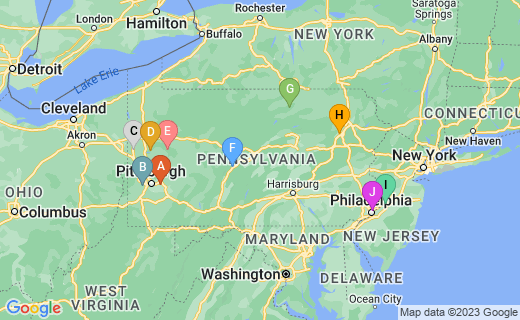