Not So Haunted Washington

I was quite surprised when I started looking for haunted cemeteries in Washington. Not to say that Washington doesn't have its fair share of hauntings, they're just not in cemeteries. I only found 13 cemeteries that had claims to be haunted. Two pairs of these were the same cemeteries, just with different names. Four of the others had no paranormal phenomena other than a feeling of unease. Here are the seven remaining that have a lot of activity or have a particular ghostly entity.

Sunnyside Cemetery began as a burial ground for the first settlers. The first burial was Winfield Ebey in 1865. The cemetery is located on Whidbey Island near Coupeville in Island County. It has over 3,000 interments.

Mr. Ebey is the only known ghost here. He is seen walking through the cemetery, sometimes with his head, sometimes without it. He is occasionally seen in and around the old cabin that his family lived in after his death.

Bayview Cemetery was established in 1887 and contains many of the founding families, including names such as Bloedel and Roeder. The cemetery has a total of 234 acres, but only 50 are being used currently. Located in Bellingham in Whatcom County, there are over 23,000 interments.

There are two legends associated with this cemetery. The first is called The Death Bed. It is the tomb of Edmund L. Gaudette. He died in 1916 of a stroke. His first wife had died in 1910 of tuberculosis. A statue resembling a small-scale Parthenon was placed on her grave. When Edward died he was buried in the same plot. Half of the tomb remains empty because his second wife Laura, who died in 1924, was buried in Seattle because of some legal issues with the rest of the family. The myth about this “bed” is that if you lie on it you will have a premature death.

The other legend is about a statue called Angel Eyes. There are two different stories about this one. One is that if you go to the cemetery on a night with a full moon you will see the stone angel weeping bloody tears. The other story is that the eyes will glow. Buried at the foot of the statue is William H. Bland and members of his family. His first wife, Hattie, was the first to die in 1910 of tuberculosis. Mr. Bland died in 1936 when he committed suicide after falling on hard times during the depression.

Abbey View Memorial Park is located near Brier and Mountlake Terrace in Snohomish County. It has over 3,000 interments dating back to 1915.

This cemetery is not known as a hotbed of paranormal activity, but I did come across a story by a young man. His grandparents lived next to the cemetery until he was about ten years old and he had a fascination with it all his life.

As an adult he would go running around the outside of the cemetery. One day during the spring, on a pretty, sunny day, he was jogging along the curvy road. He saw something that the only way he could describe it was as “a round cloud rolling from the right side of the graveyard to the left.”

On another afternoon that same spring, he saw what appeared to be a woman dressed completely in white, billowing clothing. She might actually have been a live person, but it spooked him nonetheless.

Paradise Lake Cemetery, also known as Maltby Cemetery is in Maltby in King County. There are 75 interments dating back to 1894.

The ghost of women and children dressed in ragged clothes are the predominant apparitions seen here. They just roam around amid the tombstones.

There is a legend here called The 13 Steps to Hell. Supposedly, there used to be a staircase here that began on ground level and then went down into the earth for 13 steps. The legend is that this lead to a magnificent tomb that belonged to a wealthy family that lived in the area. People, mostly teenagers, would go to the bottom of the stairs and then turn around, only to find that the cemetery was gone and what they saw was literally Hell. The story goes on that the kids who saw this would return to the cemetery in a trance-like state and one in particular never uttered another word.

Depending on who is telling the story, the stairs were bulldozed either in the early 1960s or in 1992. Regardless, even though trespassing is strictly forbidden, teens routinely go there with shovels to try and find the staircase.

Black Diamond Cemetery was founded in 1884 by the city of Black Diamond in King County. There are over 1,200 interments dating back to 1858. There are many children’s graves here from the small pox and flu epidemics from the early 1900s. There are a few graves of mine workers that died in explosions in 1902, 1910, and 1915.

One of the hauntings here is supposedly a miner who was killed in one of the explosions. On foggy nights you can see his lantern swinging as he walks through the cemetery.

There have also been reports of a white ghost horse trotting around in the cemetery.

Carnation Cemetery, formerly known as the Old Tolt Cemetery, was started in 1905 when Frederick B. Bagwell donated land for it. He was buried there in 1952. Located in King County, there are over 1,000 interments.

This cemetery has some very common forms of paranormal activities. Some people feel actual pain upon entering the cemetery. There have been reports of hearing footsteps when no one is visible. People have also seen things out of the corner of their eyes and heard someone whispering in their ear.

There is one unknown ghost that is seen occasionally. She is a woman dressed in white and sometimes there is a young boy with her.

Thorp Cemetery is located near the town of Thorp in Kittitas County. There are over 1,000 interments dating back to 1878. The land was donated by Herman Page who had moved here from New York and is buried here.

There are reports of one ghost here. She is called Suzy and is an Indian woman who was supposedly lynched sometime around 1890. She is seen on moonlit nights riding around on a white horse and crying. 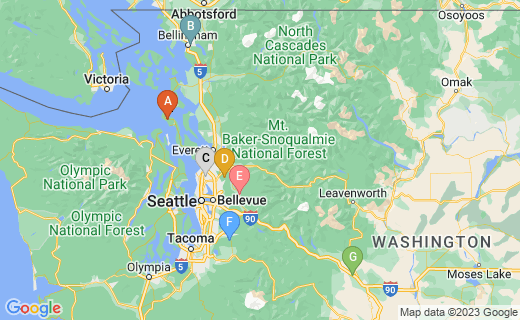