West Virginia’s early history is shared with the state of Virginia going back to 1609. In 1861, the 40 western counties of Virginia opposed secession from the Union and formed their own government. They were granted statehood in 1863. West Virginia covers 24,230 square miles and has almost 20,000 cemeteries. Here are a few of the haunted ones.

Mingo Cemetery is located in Randolph County in the western part of the George Washington and Jefferson National Forest. It is at the end of an unnamed road off Route 62 just west of Mingo. There are around 800 interments here dating back to 1830.

Ghost children have been seen playing and singing in the cemetery. They are described as being dressed in clothing from the 1800s. When investigators tried to ask the locals about the ghosts they didn’t want to talk about it. Of the marked graves there are 24 of children one-year-old and younger. There are six little boys and girls between the ages of three and eight from five different families. These may be the kids the investigators saw playing.

Stewart’s Road Cemetery, also known as Stewart Cemetery, is located in Philippi in Barbour County at the end of Stewarts Run Road. There are about 10 grave markers and 40 unmarked graves.

Drivers have claimed that as they round the curve before the cemetery they see a woman standing in the road pointing at them. They don’t have time to brake and run over her, or rather through her, and she disappears.

Visitors who go into the cemetery at night report feeling hands all over them. It has been described as being in a small room full of people. There is no let up in the sensation until you have left the cemetery grounds.

Highland Cemetery is north of Mannington in Marion County off Flat Run Road. There are as many as 50 interments here, but only 9 have been documented. The known dates range from 1929 to 1989.

There is a witch named Sarah supposedly buried here along with her warlock husband, Tusca. The two have been seen near Sarah’s grave many times. They disappear if approached.

The nearby chapel is said to possibly have been used by satanists. There are no crosses or other Christian icons inside.

Campbell Cemetery, also known as God’s Acre Cemetery, is located near Bethany off Peace Point Road in Brooke County. The cemetery is approximately an acre in size. There are over 300 interments dating back to the early 1800s. The founder of Bethany College, Alexander Campbell, is buried here, along with 13 of his 14 children, both his wives, and many of his descendants.

There was a wall built around the cemetery in 1866 by Mr. Campbell. The stone wall is four feet tall plus three more feet below ground. There is no break in the wall that completely encompasses the graves. The theory is the souls are trapped here and that is why the cemetery is so haunted. There are stone steps leading up the outside of the wall and then down on the inside.

Visitors to the cemetery say they can feel the spirits of the people buried there and that it seems very crowded. The mausoleum of Argyle Campbell, who was buried in 1944, causes feelings of dread and apprehension in visitors. It is relatively tall, grayish-white in color, and has a green copper door. The tomb has an inscription on it that reads, “Beyond this door is rest.” Underneath the inscription is a bullet hole.

The story of the bullet hole comes from a student from the nearby college. Some boys were spending the night in the cemetery, probably to prove their bravery to their peers, and slept on the ground next to the mausoleum. One boy dreamed he was being shot at by Campbell’s ghost and the next morning the bullet hole had appeared on the tomb.

One of the other boys dreamed that he was locked inside the tomb. He tried clawing his way out and then woke up screaming. When he awoke he was shocked to find his fingers were all bloody and mangled, just as if he had been clawing at the concrete.

Riverview Cemetery is in Parkersburg at the corner of 13th and Ann Streets. There are over 2,000 interments going back to 1801. This Wood County cemetery was originally known as the Cook Family Cemetery.

There are many entities at this cemetery who are not at rest. In particular is a sea captain who is often seen bending over his own grave. Other ghosts have been seen, appearing to be wandering aimlessly.

Orbs, strange mists, and fogs have been successfully photographed by investigators.

Greenbottom Cemetery is located near Lesage in Cabell County off Route 2 and has around 1,400 interments.

This cemetery is known for dense fogs and cold spots.

One story told by a visitor to this cemetery is that she came to the cemetery with a group of friends. One of the other girls returned to the car to get her camera and while she was at the car the other members of the group saw a man approach her. When she returned to the group they asked her who the man was. She claimed she hadn't seen anyone.

Isaac-Slone Cemetery is located off One Mile Road near Branchland in Lincoln County. It is a small cemetery with less than 200 interments dating back to the late 1800s.

There is a female ghost here that acts strangely. She comes up behind visitors and blows on or in their ears. Occasionally she will actually whisper a request.

There are also the ghosts of two babies here. They were twin sisters, Faith and Hope, that died at birth in 2000. Visitors claim to hear them crying or giggling. A few people have actually seen them.

Spry Cemetery is a small cemetery located off Frances Creek Road near Harts in Lincoln County. The cemetery is not very well documented.

There is a ghost here of a woman named Dixie. She died in childbirth and Dixie and her baby are buried side by side. On nights with a full moon, Dixie can be seen rocking and cooing to the infant. They are both dressed in white and appear to be crying.

There is also a legend here of something that occurred in the 1950s. There is a footbridge leading into the cemetery and one night the devil himself appeared on it. There was a man at the cemetery who was just plain mean. He mistreated his family and neighbors and the day before he had proclaimed he was tough enough to beat the devil.

When the man saw the devil standing on the bridge he told him to come over to the road and fight him. The devil responded that he could not cross running water and that the man knew that. The devil laughed and disappeared. The next day a young man crossed the bridge and saw cloven hoof prints burned into the bridge.

Woodlawn Cemetery, also known as Woodlawn Memorial Cemetery, is located on Route 52 in Bluewell. It was started in the early 1930s and sits on over 30 acres in Mercer County. There are a little over 16,000 interments.

There are several ghosts seen here. They only appear in the older section of the graveyard. These ghosts speak to visitors, but all they have to say is, “Leave!”

The Waterfall Mausoleum is haunted, too. Ghosts that look like living people are seen here and then vanish into thin air. Tapping noises can be heard coming from inside the mausoleum late at night. Occasionally there is a horrendous smell coming from it. Several people have mysteriously been locked inside. 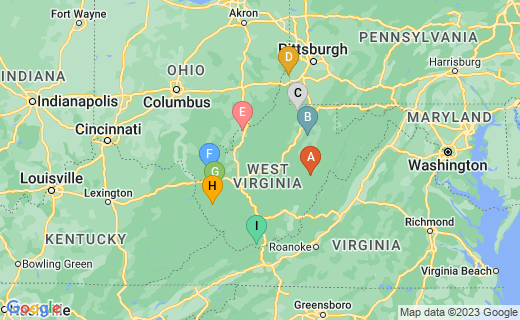