Pioneer Cemetery is near Coloma in El Dorado County. There are around 500 interments with somewhere between 200 and 300 additional unmarked graves. The first known burials were in 1849. The cemetery is now part of the Marshall Gold Discovery State Park after the State of California took over ownership in 1981.

Some apparitions are scary, but Pioneer Cemetery’s Beckoning Specter in Burgundy is not. She waves to passing motorists and visitors to the cemetery, motioning for them to come to her, but when people try to approach her she simply vanishes.

The grave site she tends to so lovingly was built to have four graves, but there are only three. One is William Schieffer, age 2, 1861. There is also May Schieffer, age 27, 1890. And finally, Charles Schieffer, age 42. It is hard to tell from the dates what exactly the familial relationships were. Maybe the fourth side was for the woman in burgundy, but we cannot be sure.

Ghost hunters using night vision cameras have seen glowing energy balls around the tombstones, two small green ones at May’s grave and a larger, brilliant white one above.

There are very cold spots throughout the cemetery, but at the Schieffer graves the opposite is true. A warmth is felt there even on a cold day.

A family tells a story of cutting through the cemetery on a pretty day when the air suddenly turned extremely cold and a heavy mist rolled in with extreme speed. They left the graveyard with haste.

Lone Tree Cemetery is in the unincorporated town of Fairview, near the city of Hayward, in Alameda County. It was established in 1868 and is still active, sitting on 42 acres with around 6,000 interments. It has a mausoleum and columbarium.

There are no specific ghosts associated with this cemetery, though there are several unsettling occurrences.

Sacramento City Cemetery is the oldest existing cemetery in Sacramento and lies at the highest point in the county. It was established in 1849 on ten acres of land donated for this purpose by the founder of Sacramento, John Augustus Sutton. There are approximately 30,000 interments.

There have been several reports of various ghosts in this cemetery. There is a couple dressed in black that are always seen together. There is also a pit bull dog that follows visitors around for a while and then vanishes. A small girl has been seen playing close to the tombstone of a child.

There is one ghost here who is called Sacramento’s Favorite Ghost. Mary Woolsey was a 12-year-old girl who died in 1879 from encephalitis. She appeared to her parents not long after her death and told them she was not dead and that she was waiting for them on the other side. Her tombstone is said to give off a positive energy, as opposed to the negative or neutral energy given off by other nearby tombstones.

Cherokee Cemetery was started in the 1850s and is near the town of Cherokee in Nevada County. There are 47 interments, the oldest readable marker is in 1863. The most recent, as of this writing, was in 2012. Cherokee was a gold mining town and has also been known as Melrose, Patterson, and Tyler. All that remains today is a schoolhouse and the cemetery.

There are two ghosts that appear here on a regular basis. Legend has it that the town sweetheart (whatever that means) was slain in 1800 and the townspeople burned the man who killed her alive inside his house which was across the street from the cemetery. When you visit the cemetery you can hear the man stomping around, but you can’t see him.

The other ghost is that of a little boy. He and his father died on the same day. Legend has it that If you place flowers on his grave, he will come to you in the evening and thank you.

Acacia Memorial Park was established in 1872 in Modesto, Stanislaus County. Stanislaus Lodge #206 Free & Accepted Masons bought five acres of land from John Robinson for $150. The cemetery expanded in the 1920s and again in 1960 to its present size of almost 13 acres. It has around 15,000 interments.

People driving through the cemetery have heard mournful sounds of crying and screaming. This has occurred at night and during the day time. People who have heard these sounds say they give them a very strong feeling of foreboding.

Mountain Cemetery was founded in 1841 in Santa Ana in Orange County. It originally contained 60 acres overlooking the northern edge of the town of Sonoma at the bottom of Schocken Hill. It has around 5,000 interments.

There is a grave here that is located apart from the rest. The only engraving on the tombstone is the name Lise. Odd lights, dark spirits, stinky smells and cold spots are associated with this burial site.

Multi-colored orbs appear on photographs taken shortly after the sun goes down.

Rosehill Cemetery is a historic Welsh Protestant cemetery, now included in the Black Diamond Mines Regional Preserve in Contra Costa County. There are around 200 interments. The oldest grave is that of teenager Elizabeth Richmond, dated February 1865.

Visitors to this cemetery can expect to see the White Witch whose real name was Sarah Norton. Her tombstone says she was born in Canada and died October 5, 1879. Her husband, Noah, died in 1877.

Sarah was a midwife who died on the way to deliver a baby when her carriage turned over and crushed her to death. She is seen floating throughout the cemetery as if she is looking for a way to leave.

There is one report from someone who was in the cemetery late at night with friends. He said they saw a white hovering figure that came within 20 feet of the group. Then the creature began screeching at them so they did what they thought was best. They ran away as fast as possible.

There is one other ghost here but her name is not known. She was executed for being a witch when the children she was caring for all died of a mysterious illness.

The Ed Levin Cemetery is also known as Laguna Hills Cemetery. It is located in Milpitas in Santa Clara County. There are 57 interments. The oldest readable tombstone is from 1868. Only seven have dates, the rest are unknown.

The main paranormal occurrence here is the crying and moaning that comes from the whole cemetery. The speculation is that the spirits are crying because so many of the tombstones and graves themselves have been disturbed.

Mission San José Cemetery was founded in 1797 in Fremont, Alameda County. There are 296 interments in the cemetery. The Mission is now a museum. There have been many tragic deaths here due to earthquakes and fires. 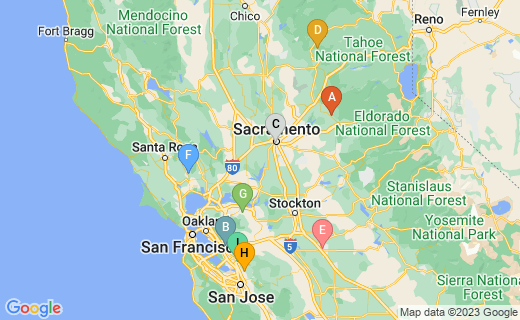