New Salem Baptist Church Cemetery is located in Tigerville in Greenville County on Highway 414. There are over 100 interments dating back to the early 1900s.

This cemetery has many of the phenomena generally associated with a haunting. Visitors tend to feel a general sense of being watched and an overall foreboding. Cold spots are common. Different colored lights are seen moving throughout the cemetery with no obvious source.

There are woods around part of the cemetery and a field with tall grass to one side. Voices are sometimes heard coming from the field and strange sounds come for the woods. There can be what has been called “frantic animal activity.” People have also claimed to feel invisible animals or people brushing up against them.

One man told a story of strolling through the graveyard while smoking a pipe. A puff of smoke came out of the pipe and did not evaporate. Instead, it moved a few feet in front of him, grew in size, and took on human form. It then blew away.

Oakwood Cemetery is located in Spartanburg on Oakwood Avenue. There are over 5,000 interments here going back to at least 1818. The cemetery is known by many as Hell’s Gate.

This is considered by many to be the most haunted cemetery in South Carolina. There has been some evidence of satanic rituals being performed here and there have been cases of bodies being dug up. This has happened as recently as 2012.

The back of the property is where most of the poor are buried and many things occur here. Electronic devices, such as cameras and cell phones, die quickly. Investigators have reported their equipment losing power after a very short time. Cold spots and orbs are so common they are almost taken for granted. The feeling of being watched from afar is also very common.

Visitors have reported hearing the laughter of children and seeing little ghosts playing in the cemetery. There is a particular little boy who walks up to visitors with a ball in his hand and asks them to play with him. Before the person can respond, he fades away.

Crestview Baptist Church Cemetery is located in Gaffney in Cherokee County. It can be found at the corner of Bonner Road and Daniel Morgan School Road. There are around 100 interments dating back to 1963.

The haunting here doesn’t take place in the actual cemetery but behind it. There is a space behind the cemetery that is called Blast Cemetery or Blast Battle Ground. There are still graves there but no markers.

Late at night when the skies are clear, the sounds of cannons and gunshots can be heard. There will be a lull in the noise and then soldiers can be seen fighting with guns and swords. There are more cannon sounds.

If you make noise or any sudden moves, human-looking creatures will come after you. The creatures crawl very fast and have bloody mouths. They say in a gravelly voice, “I lost, but I’ll get you for it!” Sometimes they say, “You are a killer, you must die.” Some people have actually been hurt trying to escape from the beings.

Parks Cemetery is in Summerville in Union County on Sykes Drive. There are at least 11 interments, mostly members of the Parks family. It is also called the Summerville Cemetery.

Visitors to this cemetery often hear a baby crying near the rear of the cemetery. If the sound is followed it leads to a tombstone with just a name, Jessie Blue Hyatt, and a date, 2002. If the visitor leaves a flower or any other small token the crying will stop.

There seems to be a smell of smoke near the grave and if you stay too long it can become difficult to breathe.

Bethabara Baptist Church Cemetery is located on Bethabara Church Road in Cross Hill in Laurens County. The road runs through the cemetery. There are over 200 interments. The oldest go back to the late 1700s.

There is a soldier here that was in the Civil War. His tombstone is normally rust colored. Three times a year it glows, changing to different colors and then returning to the original rust color.

West End Cemetery is located on Crosson Street in Newberry. This cemetery has over 500 interments, the oldest dating back to the 1890s.

The legend here is called “The Bride of West End.” A sad looking ghost in a wedding gown is seen walking around in the cemetery, in a field next to the cemetery, or sitting in the trees. She is supposedly waiting for her soon to be husband to come and pick her up.

Rock Presbyterian Church Cemetery is also known as Rock Church Graveyard. It is located in Greenwood at the end of Rock Church Road. There are over 150 interments. The oldest graves are those of the Blake and Buchanan families in the mid 1800s. There are some that are probably even older as there are no markers, just stones.

This cemetery has quite a bit of paranormal activity. The grass will not grow around some of the tombstones. On clear days, sometimes a white mist is seen swirling around the cemetery at the church. After dark, singing can be heard coming from the far side of the graveyard.

The cemetery is located down the street from the church and there is a large house across the road from the cemetery. A full-bodied apparition of a man has repeatedly been seen in the master bedroom of that house. The basement doors refuse to stay locked. A blue light will appear and grow in size until it fills the room. It will then shrink again and go into the kitchen where it disappears, leaving a musty odor.

Ridge Cemetery is in Lowndesville on Ridge Road. It surrounds Ridge Church, established in 1839, which was abandoned long ago. Supposedly it was used by satanists for a short time after that. This Abbeville County cemetery has a little over 100 documented interments. The dates range from the mid 1800s to 2013. This cemetery is very large with many unmarked graves. There is a large mass grave of the victims of a huge fire in Lowndesville in the 1920s.

The cemetery and the church are both said to be haunted. Many orbs are seen, both at night and during the daylight hours. People have heard sermons coming from inside the church, even though it was empty. Dark shadows moving around have been seen through the windows. It is always freezing cold inside.

Both the cemetery and church building cause people to have feelings of a negative force and being unwanted.

Badwell Cemetery is located between Lethia and McCormick in McCormick County. It is at the dead end of Badwell Cemetery Road. Some remains were moved up the hill when the Savannah River was dammed. There is an unknown number of interments. There are 25 with published information. The majority are from the Allston and Pettigrew(gru) families, dating back to the early 1800s. They were French Huguenots who settled here in the late 1700s. The site is now maintained by the Sumter National Forest.

There is a wall made of stone blocks encircling the graveyard. There was an iron gate with a grim reaper on it, but it was stolen. There is said to be a troll that guards the perimeter.

Graniteville Cemetery is located on Gregg Highway in Aiken County. There are over 7,000 interments dating back to the mid 1800s.

There is a ghost of a witch here. It appears she was a good witch, because she has been seen late at night putting flowers on the graves of children.

On nights with a full moon, when the weather is cold, many different sounds can be heard, such as laughter, screams, and gunshots. 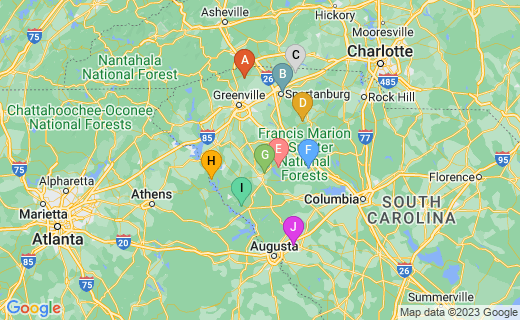