Blakeney Cemetery is located off Dudley Road near Pageland in Chesterfield County. It is literally in the middle of nowhere. The cemetery was named after Captain John Blakeney, Sr. He was from Ireland and fought in the Revolutionary War. He died in 1832. The 20 documented graves are all from the Blakeney family except for one.

Members of the Blakeney family also fought in the Civil War. The entire family seems to haunt this cemetery. Men in Civil War uniforms, women and children are all seen here.

Blenheim Cemetery is in Marlboro County and can be found in Blenheim on South Main Street at the end of Wright Avenue. There are 15 documented interments dating from 1938 to 2013.

The legend here is called Bingham’s Light. There are two different stories about the light. One is that it is a lantern carried by a railroad worker named Bingham.

The other story takes place early in the 19th century. A man named Bingham goes out into a snowstorm searching for his two children that have gone missing. Bingham and his kids were never seen or heard from again. The legend says that if you see the light and yell, “I have your children!” then the light will turn red. If you try to get to the light it vanishes.

Lowther’s Hill Cemetery is also known as Montrose Graveyard. It is located west of Mechanicsville in Darlington County on Cashua Ferry Road. There are 53 documented interments. The most common family name is Lide, dating back to 1789.

The Montrose Church burned down mysteriously in the 1800s. It was rebuilt and then burned down again. There are no signs left of where it was. The cemetery was in such bad shape that one marker with all the names on it was placed at the front of the property.

There is a legend that in the late 1950s or early 1960s that a huge black man was kidnapping local children and then murdering them in the cemetery. Witnesses claim to hear them screaming and crying. They also claim to see a large black ghost with glowing red eyes.

Visitors have also seen a little boy dressed in mid 1800s clothing. He’s always hanging around a tombstone with nothing on it but the name Joseph.

Sansbury Cemetery is located on East Smith Street in Timmonsville in Florence County. There are over 100 interments dating back to the 1910s. The oldest graves belong to the Hamlin family.

This cemetery does not lay claim to any particular ghosts. Visitors report hearing strange noises, even a baby crying. The main occurrence here is the feelings people have while inside. Visitors have said the whole cemetery causes feelings of depression and fear. Oddly enough the sensations seem to be worse if there are more than two or three people together.

Salem Black River Cemetery is also known as Salem Brick Church Cemetery. It is located on North Brick Church Road in Mayesville in Sumter County. There are over 500 interments. The oldest was baby James Wilson that died in 1700. South Carolina Congressman Robert Witherspoon is buried here.

This cemetery and the church are haunted by a priest from the early 1900s. His entire family, except for him, died. It was probably during the 1918 flu pandemic. He was so distraught at being left alone that he rejected God and started performing satanic seances and rituals.

He lived in an old shack behind the church and to this day people claim to see a light coming from inside even though there is no electricity. Sometimes a dark figure of the priest can be seen in the window.

The cemetery is actually separated into two graveyards. The smaller one in the back is for the priests of the church. It is said this part of the cemetery is haunted by some, if not all, of the former priests.

Church of the Holy Cross Cemetery

Church of the Holy Cross Cemetery is also known as Holy Cross Episcopal Church. It is in Stateburg on North Kings Highway in Sumter County. There are over 500 interments dating back to the early 1800s. There are two Congressmen and one Congressional Medal of Honor Recipient buried here.

There are two ghosts in this cemetery. Both are non-threatening. One is obviously a Confederate soldier who just strolls around the graveyard. If he is approached by a living person he disappears.

The other ghost is a woman of indeterminate age. She sits on a low hanging branch of a tree with her legs crossed. All she does is sit and watch.

There is a dirt road encircling the graves and a road that runs right through the middle. The legend of of this cemetery is very specific. Drive to the center of the cemetery, flash the headlights three times, then get out of the car. All the ghosts of the cemetery will come out. You can hear them walking around. It also sounds like they are throwing and breaking things.

Saint Philips Episcopal Church Cemetery is located on Church Street in Charleston. There are over 3,000 interments going back to the early 1700s. The oldest Anglican church in the United States, it was built in 1680. That church was destroyed by a hurricane and rebuilt in 1723. It burned to the ground in 1835. The current church was completed in 1838. It was added to the National Register of Historic Places and named a National Historic Landmark in 1973.

The cemetery is divided into two parts. The right side is for people born in Charleston, the left is for everyone else. There is a famous ghost on the right side. Her name is Sue Howard Hardy.

On June 10, 1987, a man named Harry Reynolds went to the cemetery to try out a new camera he had just bought. The cemetery was closed so he just slipped the camera in between the bars and used up the rest of the roll of film. When he had the film developed he was shocked to see what looked like a woman crying over a grave.

Harry was quite confused and sent the photograph and negatives to Kodak. They could not explain the picture either.

He later found out that the woman was a mother who had had a stillborn baby exactly 99 years to the day that he took the picture. She died six days later from blood loss.

The full name of this cemetery is Chapel of Ease to St. James Goose Creek and Bethlehem. It is also known simply as Chapel Bethlehem Cemetery. Located on Strawberry Chapel Road, just west of Bonneau Ferry Wildlife Management Area in Berkeley County, there are approximately 50 interments. The dates go back to the mid 1700s.

A chapel of ease was a church building that wasn’t a parish church but was located in places to make it easier for congregants to get there. In the early days of the country churches were so spread out that it was hard for people get there every Sunday.

The chapel and the cemetery are both considered to be haunted. One of the scary stories here is about 7-year-old Catherine Chicken. The chapel was used as a school and the little girl made her teacher so mad that she tied the child to a tombstone and left her there. What happened next is up for debate. One account is that a family servant found and rescued her and the teacher was ran out of town. The other is that Catherine died of fright. Either way, she still supposedly haunts the cemetery.

The All Saints Episcopal Church congregation was formed in 1739. It is located on Kings River Road in Pawleys Island in Georgetown County. There are over 800 interments going back to the early 1800s.

The story here is about Alice Belin Flagg. She lived with her brother, Allard, who was a doctor, and her mother at the Hermitage. The Hermitage had been the summer home of rice planter James Lynch Belin. He was Alice's and Allard’s uncle.

When Alice was 15 years old she fell in love with a man that her brother thought was not good enough for her. To keep them apart, Allard sent Alice off to boarding school in Charleston. She hadn’t been there long when she contracted what was probably malaria. Allard went and brought her back to the Hermitage.

While she was in a near comatose state, Allard found a ring on a ribbon around her neck. He assumed it was from the boy he so clearly disapproved of and he threw the ring into a nearby creek.

When Alice awoke she reached for the ring and realized it was gone. She died a short time later. She is buried in the church cemetery with a marker that just says “Alice.”

Legend has it that if you walk around the marker backwards 13 times and then lie down on top of it Alice will come over the back wall to visit with you.

Women have reported feeling a tugging on their wedding band when visiting Alice’s grave. 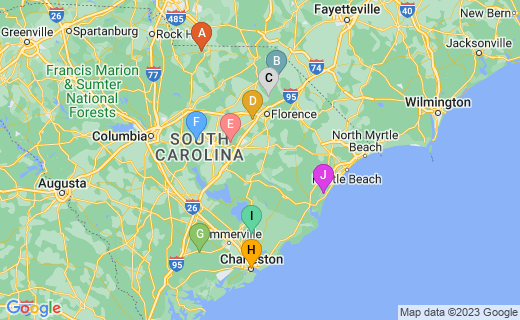