Besides being one of the most historic landmarks in New York City, the locals say Hotel Chelsea it is one of the most haunted places in the city. Constructed in 1883 and 1884, guests started checking in during 1984. It is a beautiful 12-story, red brick building. The style was a combination of Victorian Gothic and Queen Anne Revival, featuring iron balconies and a grand staircase reaching all the way to the top floor. The Hotel Chelsea was the tallest building in the state of New York when it was completed.

Despite its incredible popularity the property ran into economic problems when local theaters started moving to other areas of town. It finally had to close due to bankruptcy.

In 1905 it reopened under new ownership. Three decades later The Chelsea again faced financial problems and went into bankruptcy once again. In 1939 the building was purchased by Julius Krauss, David Bard, and Julius Gross. The property has continued to change owners throughout the years.

There have been many well-known people who have lived at Hotel Chelsea for a period of time. Some of them were Arthur Miller, Alice Cooper, Dylan Thomas, Tennessee Williams, Janis Joplin, Sid Vicious, and Jimi Hendrix.

Almost all haunted locations have been the scene of one or more tragic deaths. The Chelsea is no exception.

Dylan Thomas was a famous writer and poet. He arrived in New York in early October 1953 with many health problems. There were rumors he was an alcoholic in addition to having heart and respiratory problems. Some people claimed he suffered from blackouts. He died in his room, #206, on October 9th. Many people have claimed to see his face in the hotel but especially around the room where he died.

Nancy Spungen was the girlfriend of Sid Vicious, bassist of The Sex Pistols.”They both experimented with all types of drugs and the press dubbed her “Nauseating Nancy.” When The Sex Pistols broke up in 1978 Sid and Nancy moved into The Chelsea. Rumor has it that the two dove deeper and deeper into the drug culture and had many loud arguments in their apartment.

On October 12, 1978 Nancy was found dead on the bathroom floor of the apartment and Sid was arrested for murder. While he was out on bond he overdosed on heroin and died.

In October 2009 three women, two sisters and their mother, stayed at Hotel Chelsea. They had quite a story to tell when they left. The lights in the hallway and bathroom turned on and off over and over again and the sink also kept turning on and off by itself. At one point they heard a high-pitched woman’s scream. The weirdest thing was a photo they took. When it was developed it appeared to have a skeleton peeking out of the closet door.

The Chelsea has been closed for renovations since August 2011, but up until that time it was claimed that Thomas Wolfe’s ghost walked the eighth floor hallways.

A woman known as Mary has frequently been seen wandering the grounds. It is believed Mary was a survivor of the Titantic but that her husband perished and she is waiting for him. Actor Michael Imperioli, who played Christopher in The Sopranos claims to have seen Mary on the eighth floor. He saw her crying at the end of the hall wearing a long white dress from an earlier era. When he asked if she was okay she disappeared into thin air.

Charles R Jackson, author of The Lost Weekend committed suicide by barbiturate poisoning in his room. He died at St. Vincent’s Hospital on September 21, 1968 but went back to the hotel to haunt his old room.

The renovations that have been going on at The Chelsea have hit various snags and there is no firm date set as to when it will reopen.

The Bowery Hotel looks old with fine furniture and woodwork salvaged from historic homes and European churches. Even the tile walls an floor came from far away and long ago. Looks can be deceiving though. The Bowery Hotel was actually built in 2007. New York University built it as a dorm but then changed their minds and sold it. The rooms have antique furniture and fine linens. For some strange reason no two guest rooms are alike, which would have been very odd in a dormitory.

According to Dr. Philip Schoenberg, tour guide for the Ghosts of New York Tours, the hotel is haunted possibly because it is close to the Marble Cemetery. For some reason, starting at one o’clock in the morning, the elevators begin to act strangely. They open and close the doors and start and stop all on their own. Many blame it on poltergeists. Schoenberg also said, “People seem to have conversations with guests who disappear.”

Here is part of a Trip Advisor Review by Collin K.: “I think the place be haunted; like probably for real. I’ll leave it up to you, to ask around about this.”

In 2011 Time Out’s Own This City listed the Bowery in their “Most Haunted Places in New York City.”

According to New York Ghost Tours, a guest claimed to have been greeted by a female dressed all in white when he checked in and then abruptly disappeared. Another guest had a glass of beer spilled all over himself even though he was sitting alone.

Employees tell stories of seeing objects apparently moving around by themselves on footage from surveillance cameras.

The Algonquin Hotel was designed by architect Goldwin Starrett and opened in 1902. It has been designated as a New York City Historic Landmark. Frank Case, an American hotelier, bought the hotel in 1927 and established the tradition of hosting theatrical and literary notables which was called “The Algonquin Round Table.” Some of the members were Art Samuels, Harpo Marx, Alexander Woollcott, Charles MacArthur, and Dorothy Parker. They called themselves “The Vicious Circle.”

The hotel had a major remodel in the late 1980s, but apparently it has not deterred “The Vicious Circle.” Guests and employees alike have seen the Round Table members walking in the bar, the dining room, and the lobby.

A guest on the ninth floor awoke to an odd sound coming from the bathroom. He described it as the sound of a razor being tapped on a porcelain sink. When he turned on the light the bathroom was empty. The next night the same guest went on a cruise. He returned a little before 2:00 a.m. and took the elevator to his room on the ninth floor. When he disembarked from the elevator he heard footsteps in the stairwell, but when he looked no one was there.

Ye Waverly Inn was built in 1844. It has been a tavern, a carriage house, and a brothel. During Prohibition it was a teahouse, which meant it was a speakeasy and the teas had alcohol added to them.

An article published by The New York Times in the 1920s said that fires were being set by ghosts in Ye Waverly Inn. Guests and employees claimed to see various shadow figures moving about both inside and outside of the inn. Room 16 saw the most action.

Guests and employees have both spoken of strange sounds and doors opening and closing by themselves. The manager admitted to being “really spooked by the ghost,” but then she got used to it.

The Ameritania Hotel was built in 1917 and is just a few blocks from Times Square and Central Park. The guest rooms and public areas were refurbished in 2011, but apparently the ghosts remained.

Trip Advisor review from urbagurba in September 2012: “. . . had heard thru several blogs, etc. that the 4th floor was haunted. so on the last nite- we decided to do a little investigating. i have in my possession at least 5 pictures with orbs, and other abnormalities. but the 1 picture that disturbs me is one i took. of a door. it seems to have a mans full face screaming out . . .” 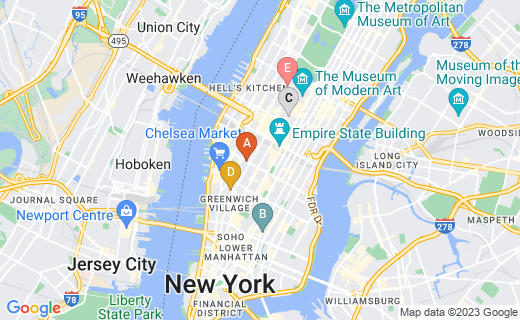 Would you stay in a hotel you knew to be haunted?