It was Julius Ceasar who mentioned the immortal words - Veni Vidi Vici after a short war in the city of Zela in modern day Turkey. He summarized the war very simply - “I came, I saw, I conquered.” When it comes to stories of people who have come to Bhagawan Sri Sathya Sai Baba and become His staunch devotees, one is reminded of the words of Ceasar. This is because, if everyone were to summarize their story into 6 words like Ceasar did, it would be
“I came, I saw, He conquered” - as simple as that.

It is indeed the fulfillment of destiny and the good fortune of many previous births that one gets the chance to live life under a Master. For my family, the Lord who has been guiding us has been Bhagawan Sri Sathya Sai Baba. And just like everyone who has a fantastic story of how he/she was introduced to Him, I too have a story of how our family was introduced to Him. But before I start delving into that beautiful story, I must say one thing about coming to a Master.

If one thinks that he/she arrived at a Master, he/she cannot be more wrong! It is always the other way. Whenever a person is ready for his/her spiritual growth, the Master personally invites the person. And this invitation can come in many ways - like a great tragedy as a Christian youth discovered or a miraculous teleportation that a monk experienced. One thing is for sure - the person who has received the ‘invite’ knows beyond doubt that it is indeed something very special and divine.

The strange Haridasa is, in fact, Hari!

The short story that am about to narrate dates back to the September of 1963. The opening sequence is set in the large family home of my grandfather, which was located in Vyalikaval, Bangalore. My father was a bonny lad of 11 then while his eldest brother (my father is the youngest of six children), S.Nagaraj, was 31 years old and in his prime. He was working as a stenographer in the Tata Oil Mills Company (TOMCO).

One night, as he slept peacefully, he had a very strange dream. He saw a Haridasa with his bull. In Karnataka, Andhra Pradesh and many other states of India, there is a tradition where a person moves along the streets with a decked and decorated bull. He often carries a shehnai (a wind instrument) on which he plays melodies, singing the glory of God. His job is to remind the society, in its day-to-day life, about God. In return, the society sustains him by giving him alms and food. That is why he is called the Haridasa or the servant of Lord Hari.

The Haridasa in my uncle’s dream, however, was very strange. He was short, wore a saffron robe and had a thick mop of curly hair. He placed his hand on my uncle’s head in benediction. Thus, my uncle received the first sign of grace, his calling from his going-to-be Lord.

He woke up the next morning. The dream was fresh and vivid in his memory but he did not pay any extra attention to it. Days turned to weeks and weeks turned to months - the dream was soon forgotten.

The Haridasa however came thumping back into my uncle’s life in a very ‘coincidental’ manner. He was riding his two-wheeler on his way back home. As he passed by the Seshadripuram police station, he noticed that there was a small pandal erected at the nearby Rama temple. At this small shrine dedicated to Lord Kodanda Rama (Rama with His bow), there was a gathering of 40-50 people and someone seemed to be addressing them. Even as he was riding past, he bent down to see who the speaker was.

He almost fell off his vehicle!

The speaker there was the same Haridasa who had come in his dream months earlier! It was the December of 1963 and Swami was on a visit to the city of Bangalore. (He was a frequent tourer then visiting more than 500 villages and towns in Andhra Pradesh and Karnataka.) My uncle got off the vehicle and stood listening to what the Haridasa was saying. Today, he does not remember what He was speaking but he was simply mesmerised and awestruck at this strange coincidence.

What were the chances of seeing some stranger in a dream and meeting the exact same stranger months later? 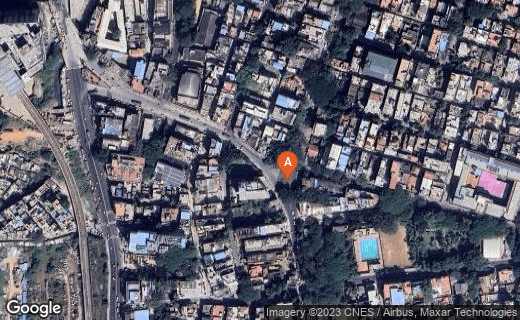 There is a Kodanda Rama Temple at this junction.

My uncle made enquiries and found out that this ‘Swami’ was the Sai Baba of Puttaparthi, a reincarnation of the Sai Baba of Shirdi. Somebody there also gave him a small photograph of the Swami. The coincidence was so powerful that he simply took the photograph and placed it in the altar, next to a picture of Shirdi Baba. Thus it was that the Lord entered the home in the form of a picture. It was now time to enshrine Himself in the hearts of this family. How that happened is another small but interesting episode which I must mention.

In the year 1964, when curiosity got the better of him, my uncle decided to make a visit to Puttaparthi. And he decided to take along with him, his youngest brother - my father. After 10 tedious hours they reached Puttaparthi and were in time for the Dasara celebrations. They were amazed at the crowds that had gathered there. A few thousands were there! (Little did they know then that the number of devotees would swell beyond millions in the future!) They also got a chance to hear many stories of Grace and Love of Swami. Staying for a day or two, they returned to Bangalore.

A few months later, my uncle got a transfer. He had to pack up and leave to Calcutta (present day Kolkata). He did not want to leave his family and ancestral home. He tried everything possible to avoid the transfer but the only alternative offered to him was the leave the company. Not knowing what to do, he decided to try out this new ‘Swami’ who promised miracles. All alone, he set out to Puttaparthi. He sat in the darshan grounds hoping to get an interview.

Swami enters the heart, and stays there for life...

Getting an interview with Bhagawan those days was a real easy thing. Devotees say,
“If one stayed in Puttaparthi for four days, he/she was assured of an interview.” (God! How I wish those days return!)
Soon enough, my uncle got an interview. He was planning to stand and ask this tiny ‘Swami’ whether he could help cancel his transfer, at least for that year. However, his experience inside the interview room was overwhelming.

At first sight, he simply fell at Swami’s feet. Swami patted him on the head, just as He had done so in his dream more than a year ago! Then, He told him lovingly,
“You are worried so much about your transfer right?”
So eager was my uncle to get the problem solved that he actually missed noticing Swami’s omniscience about his problem. Even before he could open his mouth, Swami said,
“Don’t worry. You will stay in Bangalore only. Is there anything else you want to ask?”
My uncle was tongue tied.

Swami says,
“I give you what you ask for so that one day you will ask for what I have come to give you.”

Sadly, that day somehow never seems to come! We just are tongue-tied when Swami grants us what we ask for, without us asking for it!

Today, my uncle is in his 80s. It is almost 50 years since that interview. My uncle retired at the stipulated age of 58 from TOMCO. And to this day, he has not moved out of Bangalore!

And by promising him that he would never move out of Bangalore, Swami moved into his heart forever. Using him as an instrument, Swami moved into the hearts of everyone else in the family too. And then came the episode of Swami performing the Brahmopadesham or Upanayanam for my father. This rite is considered as a second birth for a person. As far as my father is concerned, this was his true birth. That story, I shall reserve for another time.

I shall stop with saying this much that the December of 1963 is a period in time for which I shall be eternally grateful. It sowed the seeds of love for Swami in a family into which I got the chance of being born into.

If you liked this article, you will also like:

1. My first memorable interaction with Sathya Sai as His student.

2. Swami's Omniscience: The first experience in His school.

3. An amazing experience with Sathya Sai and the Suka Nadi.

Stories of experiences from the readers...