How Christians Can Handle Injustice

There is no doubt that there is a lot of injustice in the world. Every time we post something publicly on social media, we risk trolls trashing our comments. We may find ourselves being blamed for something such as a theft and be completely innocent of wrongdoing.

People are quick to assume we are guilty, and then judge and condemn us. We may even be dragged into the justice system because of false charges against us. People love to gossip and may spread fabricated rumors about us that ruin our reputations.

As Christians, we are supposed to love our neighbors as ourselves. It is hard to know how to react to when they are unjust. It is natural for us to feel outraged and full of righteous indignation. We want to defend ourselves and seek revenge. So what should we do when we face injustice? There are many examples in the Bible that we examine in answer to this question.

There are numerous examples in the Bible of people who were treated unfairly. Jesus Himself was innocent when he was condemned to a terrible death and did not deserve the terrible treatment that he endured.

Joseph was sold into slavery by his jealous brothers. He had a master who recognized his talents and he did well until his master’s wife tried to entice him into her bed. He resisted, and the wife retaliated by claiming that he tried to seduce her. He ended up in prison for many years for something he did not do.

David encountered a lot of injustice in his life. Before David became king, King Saul was jealous of David’s popularity and feared him. Saul pursued David in order to kill him (1 Samuel 19). 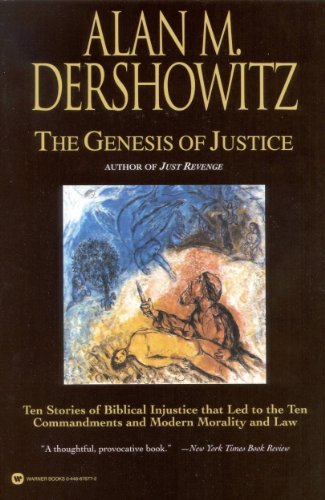 The Genesis of Justice: Ten Stories of Biblical Injustice that Led to the Ten Commandments and Modern Morality and Law
Buy Now

Saul viewed David as a threat even when David demonstrated that he had no intention of harming Saul. David crept into Saul's camp and cut a piece of Saul's robe (1 Samuel 24). David later showed Saul the cloth to demonstrate that he had the opportunity to kill him but did not do so. Saul finally stopped his pursuit after the confrontation.

After David became king, he wrote extensively on how friends and people close to him hurt and betrayed him in the Psalms. Even David’s own son, Absalom, turned against him and tried unsuccessfully to seize David's power.

How Christians can Handle Injustice

Examine Ourselves: Before we get on our high horse, we need to assure ourselves that we truly are innocent in the situation. We should examine our hearts and minds and ask God to convict us of any hidden sins (Psalm 26:2-3). David stood before God and proclaimed that he was innocent of any wrongdoing in Psalm 17.

Manage Your Emotions: We live in a world that is unfair. We can expect that injustice will happen, but when it does, it really stirs up a lot of anger, hurt, and a desire for revenge. We need to gain control over our emotions to move forward. Otherwise, negative emotions can consume our thought life. When we are stirred up, we could potentially hurt other innocent people in our lives. We need to have a clear head before we can figure out what steps, if any, we need to take to deal with the unjust attack.

Seek Justice That You May Live: Reflections and Resources on the Bible and Social Justice
Buy Now

Take Action, If Needed: Sometimes trying to take action when we suffer injustice does little good and will probably cause harm. The apostle Paul discouraged church members from dragging each other into court. He recommended that they decide to endure the injustice or go to the church or wise Christians for assistance.

In some circumstances, however, we need to do something to address the wrongs. The necessary action may be reporting a crime, or speaking out against slander or gossip. David chose to confront Saul, for example, when Saul was chasing and threatening him.

Forgive The Offenders: It is really tough to forgive people who treat us unfairly, but we must do it. Our outrage and pain can turn into a bitterness that will contaminate our lives with destructive emotions if we do not address them. The Bible clearly teachers that if we do not forgive others, God will not forgive us from our sins. It is tough to do and we may have to revisit the process again and again to maintain our emotional health.

Do Not Seek Vengeance: Christians should not repay evil for evil or insult for insult (1 Peter 3:9). Instead, we should repay evil with blessings. Jesus said that we are blessed when people persecute us because of our righteousness and say false things about us. We should show love and do good to others such as feeding them or giving them something to drink. Doing so is like heaping ‘burning coals’ on their heads (Romans 12:20).

God tells us in Psalm 37 that we should not fret over evildoers. God promises that He will shelter us from harm and be our refuge in times of trouble (Psalm 59-16). He sees how we have been mistreated and will bring dark deeds out into the light (1 Corinthians 4:5). God will vindicate us (Psalm 35:24).

Prayer: Prayer seems like a given, but there are some specific things we can pray for:

The Bible says that there is a special blessing for people who endure injustice (Proverbs 19-11). It is wise to overlook injustice when possible and forgive the offenders. It saves us much aggravation and anger and helps us to live life the way God intended. If, in some cases, we feel we need to address the wrong through some means such as confronting an offender or taking them to court, we can do it with minimal emotional damage.

If we can let go of the need for vengeance, we can live the happy life that God wants us to live.