How to Choose a Deck of Tarot Cards

Tarot cards are a popular form of divination. However, there are so many shapes, styles, and types it can be difficult to figure out which one you should buy.

Where to Buy Tarot Cards

It’s always best if you can purchase tarot cards in person from a reputable dealer. Most shop owners are more than willing to help you choose the right deck and give you other advice. You can find tarot cards at New Age and Metaphysical stores. Some bookstores carry tarot cards as well.

The next best option is to buy your tarot cards from a reputable dealer online. Read the reviews, pay attention to the mention of quality. As with most online purchases if it seems too good to be true it probably is.

There’s nothing wrong with buying tarot cards on eBay or Amazon. I bought my first tarot card deck on eBay and it’s the one I use the most. Just make sure the seller has good reputation. 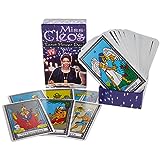 Miss Cleos Tarot Card Power Deck
This is the tarot card deck I currently use. I bought it a long time ago on eBay.
Buy Now

There are a lot of beautiful tarot card decks out there. Tarot decks come in all sorts of styles and themes; you are sure to find one that suits your fancy. Most tarot card decks also come with an instructional guide that gives the meaning of each card as well as some basic tarot card spreads.

The artwork on tarot cards is filled with symbolism. Understanding the symbolism on your tarot cards makes them easier to read without consulting the book. Some tarot card artists stick to the “traditional symbolism” more closely than others. This can cause small discrepancies in meaning between the book that came with your tarot card deck and other tarot card books you can buy.

If you’re new to the tarot it might be better to choose a tarot deck with more detailed artwork instead of a tarot deck favoring minimalism.

As you’re looking through the deck selection either in person or online, you’ll also see oracle cards being offered alongside the tarot cards. It’s important to know the difference between these two types of divination cards.

Tarot decks are a structured deck of 78 cards separated into the major and minor arcana. The meaning of each card doesn’t change much from deck to deck. There are lots of books available about tarot cards that will help you better interpret these cards.

Oracle cards are much less structured. Each deck is unique in the number of cards and the meanings of each card. When reading a deck of oracle cards there is a lot more room for interpretation. Oracle cards rely more on intuition and personal meanings than what the book says.

Since there are so many different types of tarot card and oracle decks it’s easy to keep buying and collecting.

A friend of mine let me look through her divination card collection and she had over 10 decks. She had several tarot card decks, including a Hello Kitty deck that was printed off the internet and colored in. She also had multiple oracle card decks, one was a set of cards an acquaintance of hers had made and printed. It just had small phrases on each card but it was pretty effective in telling me what I needed to know.

Let me know your favorite tarot card or oracle deck down in the comments.