How to do a Single Card Tarot Reading

The tarot has origins back in the 15th century, when it was played as a game in various parts of Europe. They were not popularly used for divination until the later 18th century. Today, they’re best known for that use. They can also be used for writing prompts and inspiration for many different forms of art.

One of the most important things to remember when using the tarot, or any other form of divination, is that the future isn't set in stone. If we don’t like what the reading tells us, we each have the power to change the outcomes of our own lives.

With that said, let’s get on with the fun.

Pick a Deck
There’s a wide variety of decks available, and more being created as time passes. However, the over all symbolism spans over artistic styles and books written on the subject. When shopping for a deck, go for what appeals most to you, as the reader. The more comfortable you are with the tools, the more easily you’ll be able to use them.

I have two decks, myself: the Witch’s Tarot and Shadowscapes Tarot. I usually use the former for readings, and the latter for writing prompts, but they both work equally well for me.

You can make your own deck, as well. I had a reading done by an amazing gentleman earlier this year who had made his own deck out of carefully chosen pictures laminated over stiff cardboard backing. It worked brilliantly, and they looked great, too.

Familiarize Yourself with the Cards
Before you make your own deck, however, it’s best to familiarize yourself with the cards themselves and the deeper meanings. Most decks on the market come with a book to help with interpretations, but I’ve found that studying them independently allows for easier interpretation when doing readings.

The tarot is broken up into two separate groupings: the major arcana and the minor arcana. Simply put, the difference between the two is that the minor arcana address more the small events that make up our daily lives, while major arcana represent bigger turning points and archetypes that we each carry within ourselves.

For this purpose, I tend to view the various suits of the minor arcana in a broader way.

When the Major Arcana show up in a single card reading, the card tends to represent some deeper, driving force behind the question. Each card of the Major Arcana represents an element of life we must all transverse, from the carefree Fool, to the terror of the Tower crumbling around us to the thrilling beat of life within the Empress. 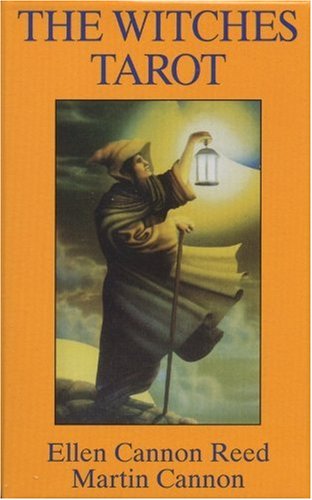 The Witches Tarot
My other deck - the Witch's Tarot. Lovely pictures and I find it very soothing to use.
Buy Now

Think of a Question
When doing single card readings, it’s usually best to ask simple questions, like those requiring a yes or no answer. However, I’ve often found that asking questions about what area to concentrate on to achieve a goal of some sort works well.

Generally, it’s best for someone else to do a reading for you, but it’s not unheard of to do a reading for yourself. The tarot has a funny way of telling us what we already know and pointing things out that we might not necessarily want to think about. When we read ourselves, we tend to be a bit biased because we’re the ones who will be facing our futures and must live in our present.

In the end, it comes down to each individual’s beliefs and comfort zones.

The act of shuffling not only mixes the cards, but helps the reader focus on the question or person they’re reading. It’s believed that concentration helps the subconscious or psychic link mature enough for the cards to help get the message through.

By that same token, putting the cards back in numerical and suite order after readings are done and cleansing them will help keep their energy clear. At the very least, the psychological act of re-sorting and cleansing helps to clear the reader’s mind for the next task on their list.

Ever since I’ve started studying tarot, I’ve always spread the deck and picked the cards based off of instinct alone if I’m reading for someone over the phone or internet. If the person is right there, I have them pick the cards themselves.

Again, it’s up to the individual to figure out what works best for them. Some people just draw from the top of the deck, while others draw from the bottom.

This is where the familiarity with the cards comes in. However, follow your instinct on this one, too. Although the meanings out of the books are helpful, the real truth comes from your first impressions of the card and the feelings brought forth by the image on it. Meditating on the reading after it’s done can bring further meaning if you feel as if you need more.

For simple yes or no questions, you can just draw a conclusion about which way the card is facing when you draw it. If it’s right side up, the answer is “yes”, if it’s upside down, it’s “no”.

Before writing this article, I did a couple of simple readings over the internet for two of my friends. Volunteers for free tarot readings are rarely hard to find!

My friend, Ran, is a college student in the beginning years of her academic journey. She’s very intelligent and has a great sweetly spicy temperament to her. Her question was, “Will I be transferred to university?”

After shuffling, I pulled the Chariot for her – upright. She liked that reply, since it was a straightforward “yes”. If we were to go further into the symbolism of the card, we find that it’s pretty spot on for what she's going through. The chariot represents facing challenges head on and conquering them.

College can be looked at as a race or a fight, in that you need to work very hard to succeed, and need just as much endurance and determination as if you were steering a chariot to victory.

For the second reading, I’d asked for a question about a goal my friend was trying to reach.

Another young, very bright friend, AJ, wanted to know “What part of my life do I need to pay more attention to be happy?”

When I pulled her card, I got another Major Arcana: The Wheel of Fortune. This card is all about life cycles and going with the flow of nature. She’s currently transitioning into a new phase of life, and instead of trying to control every little bit of what’s going on, she needs let go enough to let the current guide her to where she needs to go.

This card shows that these changes can’t be stopped, and my sense for her was that resisting the transitions will only make them harder than they need to be. However, what she can control is her own reaction to what’s going on. The best way to deal with these types of changes is to step back, look at the big picture and learn from what’s going on.

As with anything, belief plays a big role in how well a reading goes. Skeptics won’t get anything from one, which is perfectly fine, so long as they went into it willingly. However, putting too much stock into any aspect of the reading can cause damage, too.

A safe approach to any divination is with an open mind, but with enough grains of salt to prevent any sort of psychological hold ups from happening. Keeping a light, upbeat mood always helps, too.

Have you ever had your cards read?