If you were God, what choices would you make - a thought experiment

Just imagine that you got the opportunity to play God. So, you are sitting high up there in the heavens and looking down (no pun intended) upon the mortals on Earth. You know that everything and everyone on the planet Earth have had their ultimate origin in you and that they all will finally merge back in you. You also know that you created the world just for fun - and so everyone there should happily enjoy the game called life. But what do you see when you look at the planet? It is definitely not what you envisaged. So, you decide to leave your heavenly abode and go to Earth to set things right. How do you do it?

Now this is the point where each one should start answering for himself/herself. And here are the questions that seek your answer.

2. How long do you think you will need to accomplish the ‘setting-the-world-right’ business? That will determine your life-span on Earth. Remember you are God! So, even a lifetime of 200-250 years is possible for you.

3. Where on earth would you choose to be born? Will it be in a politically powerful country like the US? Or will being born in a poor African nation that is in dire straits help? Remember, starting off with influence and power could make the task easier.

4. What kind of family would you choose to be born into? Will it be a priest’s family or would it be a better option to be a President’s son/daughter? What would be the perfect family to launch the ‘world-changing’ mission?

5. How much money would you gift yourself? All said and done, man seems to be most influential among all and money has a sway over him.

Please let us answer these questions to ourselves before we proceed. Believe it or not, our answers will be very insightful to us in the end.

How a friend made his choices

I have a dear friend, Raju. His answers and choices for the above questions are really unique and something that got me surprised. I shall present his answers below and you will see for yourself why I was almost stunned with his answers.

1. For his birth, he picked the era that saw a great bloodshed - the time of the two World Wars.

2. He did not want any extra number of years in his lifespan. “The average lifespan of any human being would do”, was his answer.

3. He picked India as the country of birth. I think maybe he was influenced by the fact that almost all religions and Gods found acceptance in this nation.

4. (This was one surprising answer) He wanted to be born in the family of a common man - a person without any ‘ specialty’!

5. (Another surprising answer) Raju did not want even a single penny made available for him. He said that money would only be incidental for the job and there would be no shortage of it.

I must confess now that I have been camouflaging something all this while. But let me also state that it was done with a purpose. My friend Raju who I said made surprising choices is also my best-friend, my Master, my Guide and my God, Bhagawan Sri Sathya Sai Baba. Sathyanarayana Raju was the name He was given as a child. And the choices He made for achieving the mission of “repairing the ancient highway connecting God to man” seem “illogical” at first glance.

Those that have experienced Him have seen His transformative powers - the ability to transform mind and matter such that ultimately it results in the transformation of the heart! Having experienced those divine powers and such a transformation of heart myself, I often wondered as to what could be the “Master’s plan” in choosing such ‘bad’ circumstances and conditions for birth.

When Swami was born in 1926, the world was being torn asunder by the aftermath of the 1st World War and the potential preparation for the 2nd one! Puttaparthi, the village in which He chose to be born was not even on the postal map of India. Now, among the several maps made, the postal map is the most comprehensive because it reaches out to the smallest and remotest villages too. However, people from Puttaparthi had to go to nearby Bukkapatnam to collect their letters! No motor vehicle had ever touched the dusty grounds of the hamlet. Baba was almost the youngest among several children and was part of a huge joint family which struggled to provide Him two square meals a day. He had only one pair of school uniform which He washed Himself, draping His body in a towel as He waited for the clothes to dry. He used thorns as pins!

All one has to do is to pick up His biography, Sathyam Shivam Sundaram (which translates as Truth Auspiciousness Beauty) and read through all the hard work He put in to build an empire of love, service and sadhana from scratch when He could have easily used divine powers to have done it much faster. He spent so many years interacting with people and that too people of the ‘common kind’! He discussed with them their little careers, relationships and problems. He healed them of headaches and heartaches. And He did not seem in any hurry.

What kind of Divine planning is that when transformation of the world is the mission?

(Please note - All the photos used below are taken from a classic book - Love is My Form - a masterpiece of biographical work done by Sri. Padmanabhan. It is a personal recommendation from me for all the devotees who wish to savor the lovely story of Swami's childhood. The photos there are simply unbelievable and out of the world. The first 25 years of Swami, till 1950 is covered in this 600-pages coffee-table book. In fact, Mr.Padmanabhan became Dr.Padmanabhan because of this humongous, painstaking effort of collating pictures and experiences. The book can be easily ordered from the Sai Towers site. I think it costs about $50.)

A glimpse into the early life of Sathya Sai 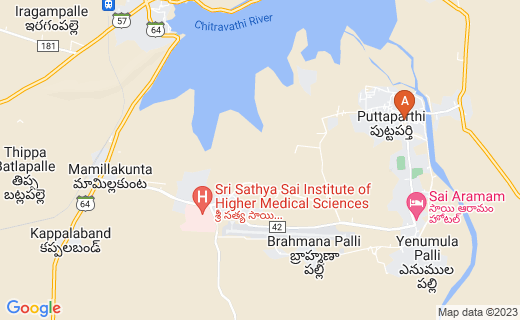 Today, Puttaparthi is well connected by road, rail and air. From Bangalore, you take a National Highway and then a State Highway to each it.

The answer comes via a quote by one of America’s most quoted writers, William Arthur Ward, who says this about teachers:

Place this along with one of Swami’s oft quoted statements,
“My life is My message.”
and the answer strikes.

Yes! Swami could have done everything with a wave of His hand, using Divine powers. But then, the world would have only sat and applauded - even criticized maybe. He did not want that. He wanted everyone to walk the path He walked. Thus, He embodied all the teachers within Himself - He inspired, demonstrated, explained and told too! He showed how miracles could be achieved simply through pure intent and selflessness. Thus, though for the first 65 years of His life He had nothing colossal against His name, within a decade after that sprang up multiple social welfare projects of a magnitude the world had never witnessed before!

And even today, such acts of great service and selflessness continue unabated, in His physical absence! The unbelievable home-building service in Trinidad and Tobago is one example. Then there is the Village Integrated Programme that has been taken up in right earnest in many states of India to make every village a model village. There are innovative water-supply and educational projects as is the mobile medical project.There are examples galore because He inspires people to lead life the way He did. He teaches that a man who gives up selfishness completely, becomes Love which is nothing but God. (Man - Self = God) Therefore when asked,

His response always has been,

“I am God. But so are you. The only difference is that I know it but you don’t.”

The answer about His ‘poor’ birth choices is so evident. His life in itself being His message is such an inspiration that every one of our hearts touched by him yearns,

“Let me make my life His message.”

One of the root causes for all kinds of pain and suffering in the world today is man’s selfishness. Even if we become God, how can we ever wipe away this selfishness by making selfish choices - of being born in a rich country, to influential parents, with lots of money and great power? Just as an incense stick is needed to wipe out a stench, selflessness is necessary to remove selfishness.

And that is why Swami’s choices seem ‘bad’ - because they have been made selflessly! Selflessness is not something we consider when we are making the ‘best’ choices because selflessness seems so defeatist! But selflessness is the path that Swami took and millions have taken after Him. What better way to ensure that the world is set right than having an entire generation that is inspired to do what their God did?

Whenever we see any avatar or person of God - Rama, Krishna, Buddha, Jesus, the Prophet - they have preached no doubt, but more than anything else, they have led lives that inspired. They have always inspired and demonstrated too. So, I feel that if I am God, the choices I make will follow the historical precedents - I will be the goodness that I want to see in my world.

Now comes the catch. I started off this article with, "If you were God..." The Truth is that all of us, in reality, are the Divine spark! So, I must start being the good that I want to see in my world - right?

If you enjoyed reading this, you will surely enjoy the following:

1. Love is My Form: Most comprehensive biography of the early years of Sri Sathya Sai.

3. The Dharma that Avatars and men of God uplift...

My other blog is at aravindb1982.blogspot.in.