In Search of the Apostles, "Thomas, the doubter?" part 1

Loving God and loving mankind is an important part of who I am, in these hubs we explore what it's like to really follow Jesus.

If I'm totally honest, this hub is one of the main reasons I started this series!

To find out what happened to the early followers of Jesus, especially those whom the Bible doesn't tell us about. Thomas is a classic example, the Bible tells us nothing about him after the resurrection. I've often wondered what he got up to, can some of the stories I heard actually be true? Can he really have traveled as far as they claimed, and done the things he did? And if he did, then how does that change things?

Join some with an 'Ancient' faith

My history with Thomas

He's the culprit you know! he's the one got me interested in this church history stuff! (At least I blame him, but I was probably interested anyway). Here's how it happened.

It was the mid 1980s, I'd left the British Army a couple of years before and was travelling in eastern Turkey, there were four of us, on a 'mission trip’ that in reality meant we had not the slightest clue what we were doing, but we were there 'doing it’ and found ourselves just outside a place called Mardin.

Mardin is unusual because it's the only city in the east that's Arabic speaking, and it's largely Christian, just outside the city, halfway to a small town called Midyat was an old monastery belonging to the ancient Assyrian church.

I'm pretty sure it was a Thursday morning, we'd got there early because the local Christians told us every Thursday the Bishop held a Bible study, (this was an 'ancient traditional church’ and they 'ain't supposed to do those kinda things right?)

And he'd love to meet us!

See, in some of these older 'traditional’ Orthodox and Assyrian churches they love for visitors to 'bring a greeting’ from their home church, it brings a sense of all being 'one big family’

Anyway, after the meeting, the Bishop invited us to drink tea with him, genuine hospitality that you just don't turn down in the Middle East, so we accepted.

We got talking about the monastery, that he said dated right back to the third century.

“Is that when Christianity came to this area?” I'm not sure who asked it, but the question was asked.

“Oh no,” he replied to us, “the first church here was founded by the Apostle Thomas, on his way through to India!”

Could that be true? Could this little church and monastery trace it's history all the way back to the Apostles, and to one that we don't have any records of, that is except for a couple of verses in the New testament that don't really put him in that good a light!

Where we're talking about 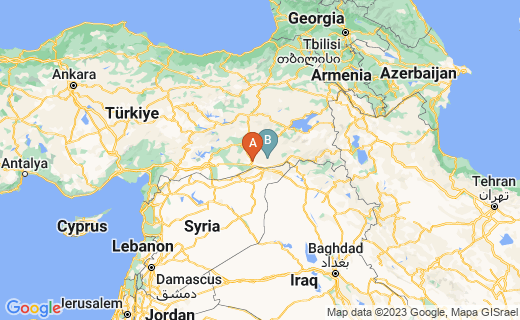 Where we were staying. The only Arabic speaking city in Turkey, and it's still got a large Christian minority

May only be small, but significant as it's right on the border with Syria, right where the fighting with ISIL was

Pretty much since that time I've been fascinated with the travels the Apostles must have made outside the Roman Empire at the time.

Remember, back then the Romans were pretty arrogant, they thought that their Empire was the civilized world, and everyone outside it was a 'Barbarian' uncultured, uncivilized and not really worth bothering about except for when you need some of their resources, then you just went and took them, by force.

In other words, pretty much like the west today.

But the Jews were different!

A couple of hundred years before the Romans came along the Jewish nation was overrun, first by the Assyrians (from Northern Syria and Iraq, Nineveh is just outside modern-day Mosul), the Babylonians and finally the Persians.

The Assyrians and Babylonians had used a policy of deportation to control their populations, once they conquered you they then forcibly displaced you from your home. The reason was that you probably worshipped a 'god' that was tied to your land, so if they deported you then they broke the ties to the local deities and would have to learn new ways of doing things, it also meant that you'd be 'good boys and girls' in the Empire, in the hope that one day you'd be allowed to go home!

The Jews were different.

In Babylon, they'd developed a system of worship that didn't really need the Temple any-more, at least not as much, all they needed was twelve Jewish men and they could have a 'Synagogue' wherever they were!

Bet you didn't know the Jews went this far!

Remember back in the book of Acts, we've got Jews from all over the known world in Jerusalem there for the feast of Pentecost. From as far afield as Rome, Babylon, Ethiopia and even Iran!

That day thousands came to faith in Jesus, but they were from all over the place! What happened when they went back home? Back to their own cities and cultures, how would they know what to believe? There weren't any books at the time, it wasn't like they could 'load up with Bibles', "Buy a few worship CDs and we'll work it out!"

Remember, these were Jews, living 'dispersed' throughout pagan lands, people whom the disciples knew were dear to God's heart (They were Jews, and God's promises to Abraham were unconditional right?"

We've got no 'record' as such of what happened, but if you think (like most western Christian books indicate) they just sat around 'on their chuff' and did nothing, then you're very much mistaken.

By the way, if you think the persecution is only coming from Muslims, think again!

In the West, persecution of the Christians may have stopped with Constantine, in the East it never did!

— Paulos Faraj Rahho, Archbishop of Mosul (Martyred in 2008 by ISIL)

What about the price of Cheese?

Okay, that's a nice history lesson, but what the heck does it have to do with the supposed subject of this hub? The Apostle Thomas.

I know that reading this hub, there are going to be those who'll think it's a nice story, some will want 'documentary evidence (especially with where I'll be going in the future showing the sheer idiocy of thinking an Emperor can control the church and 'dictate' what we believe as some claim) and there isn't any, but there's physical evidence of millions of believers (seven million in Kerala alone according to the video above) and of Jewish communities all through this region, even going as far as China by the end of the 1st century AD!

For me, everywhere I went for the next thirteen years I met Christians who traced their roots back, not to Western Missionaries, but right back to the Apostles themselves, and they'd all proudly tell me, it wasn't Peter, or Paul, or even John, but the doubter himself, Thomas, who came through and founded their church!

Thomas, the one who said, "Unless I can put my fingers in the nail holes, or my hands in his side!"

When the others said, "But we've seen him!" Thomas replied, "In your dreams!!"

Today, Christianity has become the most persecuted religion, where out of five people killed [for] religious reasons, four of them are Christians,

No records, but lots of traditions

With the Churches in the east, we've always known they were there, we've always had little hints at their history, in the next couple of hubs we'll try and explore the journey that tradition says Thomas took and see what we might find on the way.

What do you think

I know, 'traditions' aren't history, but do you think it's important to know your brother and sister's traditions?