Luke writes things, and occasionally gets paid. These things are not mutually exclusive.

Here's another one from my unpublished archives - it's an investigation into the connections between 'cyberculture' and zen Buddhism. It's written in academic form with Harvard referencing which I have left intact.

Cyberculture is a complex construct. David Bell, in An Introduction to Cybercultures (2001), claims that cyberspace is “something to be understood as it is lived… it is a lived culture, made from people, machines and stories in everyday life” (2). The internet has enabled the development of cybercultures from the realm of science fiction to a genuine lived culture.

Cyberculture challenges many accepted conventions of popular culture. One such concept is the idea of the self. People can construct new identities online. Another is the collapse of social and intellectual distinctions. The nature of the internet means that people can interact over massive distances, forging new connections across cultures.

Digital culture website The Cyberpunk Project (project.cyberpunk.ru) contain many references to Zen in articles, and their description of the religion of hackers and others interested cyberculture cites Zen Buddhism as one of the few religions to be taken seriously by them. Those engaged with cyberculture are also said to have a keen interest in new science. This essay will examine links between the construction of identity online and what is meant by the term ‘real’. It will also examine the idea of interconnectedness. It will relate these ideas to Zen philosophy.

The Buddhist concept of the ‘self’ differs depending on the version of Buddhism described. The idea of the self cannot simply be ignored, but some parts of Buddhist thought ask the question “what is self?”

“To those who hold these views that feeling is my self, it should be said that feelings may be happy, unhappy or neutral; any one of these three feelings, while it endures, excludes the other two. All of them are impermanent, conditioned, arising from other relations, things of decay, age, destruction, annihilation. If to a person experiencing any one of them it should seem ‘This is my self’, then with the passing of that feeling it should also seem to him ‘Gone is my self’.” (40)

Buddhism rests on the concept of the impermanence of reality, or the reality we perceive, and identifies the human tendency to cling to the idea of the self as a cause of suffering.

Buddhism, and Zen in particular, leads to the idea of ‘oneness’. Zen teaching can be described as the “wordless knowing of the essence and oneness of all things” (John WorldPeace 1996). This implies that all things are in some way connected, and by this connection the self can be considered peripheral.

Connectionist thinking can be seen as a process of questioning ‘received wisdom’. Until relatively recently an interdisciplinary study of any subject may have been difficult and unacceptable, but as Sadie Plant (1996) states “As theories of chaos and complexity leak out from the sciences, an emergent connectionist thinking is beginning to blur the distinction between the arts, sciences and humanities.”

The internet can be seen as the logical conclusion of connectionist thinking. New websites find new ways of connecting information together which previously would have been deemed irrelevant to each other. Connectionism implies that without other information, separate pieces of information become meaningless.

"Where I end and you begin"

The internet is constantly changing. Users sign on and off, connect and disconnect, and websites are altered, created and deleted by the hour. Daniel LaBiberte, in the online article Evolving Information Systems (1996) states that “because we don't know how to organize all info, and never will, and personal organizations are valid too, the info needs to be distributed and self organizing, as the WWW is, in fact.”

Ernest Partridge, building on James Lovelock’s Gaia theory in his lecture Taking Gaia Seriously (1994), discusses the notion of the earth, its lifeforms and human culture as an interconnected system, self regulating and self evolving. Humans are merely a part of a larger, more complex system. Partridge used Zen philosophy to explain this idea:

“The Zen philosopher, Alan Watts, put the matter this way: one might think of the stomach as the brain's way of feeding the brain. Or one might think of the brain as the stomach's way of finding food. But, of course, once you have descended "below" the level of the integrated organism, there is no "way" that makes any sense. The brain and the stomach evolved together in the integrated system that is the body. This much we all can understand. Their "interests" can only derive from the interest of the organism of which they are parts” (ibid.)

Partridge makes a statement about the mind which expands this idea outside of the body and into cyberspace, suggesting that “our minds do not end at our skin. Instead they go beyond verbal pathways, and now electronic, and eventually fiber-optic, pathways” (ibid.).

“And as I sat at my computer preparing this paper, my mind extended to, and through, my finger tips, to the keyboard and on to the screen. That same computer contains data files which I previously entered, and then put to good use, as I composed these words. And through that computer, during the same week, I sent a letter to a friend in Moscow, received a reply, and responded, all within the space of three days” (ibid.).

Partridge blurs the lines between the mind and that which it perceives, suggesting that the computer become part of his mind, and, by extension, the internet too. If this is the case, where do I end and you begin? Where is your mind? If I am talking to ‘real’ people with real minds, is this not real life? These questions reduce the importance of the self-image, and destroy the binary opposition between online life and ‘real’ life.

David Bell summarises the debate about online communities as a choice between “those who argue that cyberspace re-enchants community (perceived as eroded in ‘real life’ on the one hand, and on the other those who argue that online community is damaging RL community, by encouraging a withdrawal from ‘real life’” (93), although he recognises that these two extremes do not represent the full picture. The debate is redundant if real life and online life are the same thing.

In the online game ‘The Sims’, players are able to interact in real time. While many players choose to behave like someone else, others have chosen to create systems within the online environment. Technology website Wired News (2004) reported on a presidential election which was taking place in the online community. This was not a programmed feature, but something which emerged (self-evolved) within the community, a democratic system with online voters, each with policies which promote the improvement of their online environment. As such this government is as real and accountable as any other, although its effect on non-citizens (or citisims) is minimal.

Jean Baudrillard theorised that even the term ‘real life’ was now problematic, as the lines between ‘real’ and ‘fake’ were beginning to disappear. Mark Wheeler (1997) discussed Baudrillard’s ideas:

“For post-modernists, such as Jean Baudrillard, the distinction between the product and its symbolic worth has imploded, whereby the real and the virtual cannot be distinguished. Thus, reality has been turned into hyper-reality. In many respects, the global dissemination of information, advertising and entertainment through mass communications systems has advanced this ‘hypersimulation’ or simulacrum (the implosion of real and virtual)” (1997: 182).

For online communities to be considered as valid as ‘real’ communities, a shift in definitions is needed. The distinction between the internet and the real world, the chat room and the bar, is slowly fading, but language continues to treat cyberculture as ‘unreal’. Perhaps a redefinition of the word ‘real’ is needed.

Quantum physics attempts to explain elements of existence and reality. Physicists such as Sean Robsville have used Buddhism to explain and relate complex scientific concepts. In ‘Buddhism and Quantum Physics’ Robsville writes:

“Basically, what quantum theory says is that fundamental particles are empty of inherent existence and exist in an undefined state of potentialities. They have no inherent existence from their own side and do not become 'real' until a mind interacts with them and gives them meaning. Whenever and wherever there is no mind there is no meaning and no reality. This is a similar conclusion to the Mahayana Buddhist teachings on sunyata [the emptiness of all things].”

So, things do not become real, are meaningless, until a mind perceives them. Robsville takes this further, applying the idea to the universe as a whole:

“The ultimate manifestation of quantum sunyata is when quantum theory is applied to the entire universe. According to some cosmologists, the universe began as a quantum fluctuation in the limitless Void (Hartle-Hawking hypothesis). The universe remained as a huge quantum superposition of all possible states until the first primordial mind observed it, causing it to collapse into one actuality.” (ibid.)

Mark Cousins and Athar Hussain (1984) explained the work of Michel Foucault, referring to his work The Order of Things :

“What Foucault calls the episteme are the conditions of knowledge within which organised knowledges are structured… before any value can be attached to such terms as ‘words’ and ‘things’ it must be recognised that as terms, they will find themselves in a space of knowledge which is already organised. How words exist, what sort of things there will be, will depend on that space and its organisation.” (7)

What can and cannot be explained is dependant upon the episteme in which the knowledge is organized.

As cyberculture evolves, the need for new explanations grows, and theorists look to previously separate disciplines for inspiration. This collapse of knowledge boundaries, categories of knowledge, could be seen as the birth of a new episteme.

The convergence of connectionism, cyberculture and philosophies such as Zen gives rise to a need for the reorganisation of our systems of knowledge. The world’s ecological systems are already seen as being implicitly integrated and connected, and globalisation is essentially economic global connectionism. Now communications and culture are becoming part of this global system, fuelled by new technologies. The ‘real’ and the ‘fake’ are now one and the same. 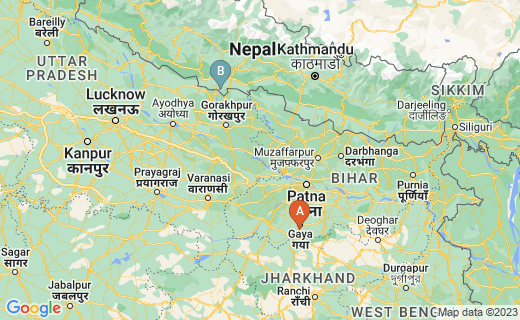 Said to be the location of the Bohdi tree under which the Budha gained enlightenment and home to the Mahabodhi Temple.

Birthplace of the Buddha.