Is Euthanasia ever Justified?

In the 5th to 4th century BCE, the Hippocratic Oath was written, taken by doctors who swear to practice their medicinal skill ethically. The responsibility of medical doctors is to cure the patient and not to misuse their ability to kill the patient. “I will neither give a deadly drug to anybody if asked for it, nor will I make a suggestion to this effect.”1 However, there are many cases throughout the history where euthanasia has been practiced. Euthanasia is literally “good death”, which in modern era means to be "a deliberate intervention undertaken with the express intention of ending a life, to relieve intractable suffering.”2 This kind of practice is not new to the modern era. Even in the ancient Greece and Rome era, suicide of the ill was frequently practiced, where they choose voluntary death rather than living in agony.3 Is euthanasia justified because they are categorized as mercy killing? As its name suggest, could mercy killing be allowed as it helps to alleviate the suffering of the patients? Is euthanasia absolutely immoral and should not be exercised in any case? However, there are many cases where ethical decision making is not so simple. Here we will examine whether there are cases when euthanasia is ever justifiable.

The case that we will consider in this category is regarding the consent of the patient. Involuntary euthanasia, as has been described partially above, is unjustifiable as it is identical to murder. The same also happens to non-voluntary euthanasia, which takes the life of innocent human being regardless of their consent. One may argue that the motive behind euthanasia is good, which is to end their suffering. Nonetheless, euthanasia is not a good excuse to commit murder, as other and much better alternatives are also available, such as palliative care.9 “Palliative care is physical, emotional and spiritual care for a dying person when cure is not possible. It includes compassion and support for family and friends.”10 It is a way of using specialized medical technique to relieve their pain and make the most out of their remaining life. The focus in this care is not to cure the illness, as it may not be at the moment, but to let the patients live in dignity before their death. Health is not everything in this life, especially without joy and love, and this is where pallative care tries to address. This, of course, needs to be emphasized in the training of medical doctors. Hence the doctor could offer this palliative care to the patient when the patient is screaming for euthanasia due to the excruciating pain they experience. “Almost all pain faced by terminally ill people can be adequately relieved.”11 This way, there is no reason of why people want to euthanize the patient. There wouldn't be any good death if we can relieve their suffering and give them a quality of joyful life. The same argument also applies to non-voluntary euthanasia. Therefore, there is no good reason of to execute euthanasia whenever a better alternative, palliative care, is available. Hence involuntary and non-voluntary euthanasia is no different from murder and could not be justified.

One does not have the right to commit voluntary euthanasia on the basis of rights. We don't have the right to die; we only have the right to live. Death was man's destiny rather than a right.14 Rights is given when one does not get what he should basically get, for example the rights to live, the rights to be protected under law, rights to liberty and happiness, etc. Death, on the other hand, will be granted on each person at an undefined time. Indeed, we have the right to get the support from society in the process of dying, but not the right to take one's own life. The society should be grieved if one wants to have the right to their own death, as it reflects that the society did not respect and care for his/her life. The appeal for the rights to die is the appeal to be cared for by the society. It should alert the society to reflect on their policy in caring for the sick and needy. Furthermore, the acceptance of euthanasia in general will also discourage the invention of new medicine, as it is easier for the society to just eliminate those with the terminal disease. Whenever there is new epidemic disease coming, it would be easier for them to command the total extermination of those infected to stop the epidemic, for their own good and for the sake of others. The society will develop into heartless, gruesome, selfish people that don't care about others' life. Therefore, the legal issue of euthanasia should be carefully and meticulously discussed as it carries along it many detrimental consequences.

Is Euthanasia ever justified then?

So far we have discussed several aspects underlying euthanasia: motives, means, consent, etc. All the cases discussed rules out the moral justification of euthanasia. However, we have not discussed about the distinction between suicide and sacrifice. Suicide such as those in voluntary euthanasia, involves giving one's own life for the sake of oneself, which mainly aims to reduce pain and suffering. Sacrifice, on the other hand, gives one's own life for the sake of others, in the benefit of others and the giving up of one's own interest. Therefore, Jesus did not commit suicide on the cross. Instead, he sacrificed himself for the salvation of humanity. Similar to yet-to-be voluntary euthanized patient who has the choice whether to let himself die or to live, the Son of God has the power to escape his death on the cross.

If a dying patient voluntarily euthanizes himself, whether it is passive or active, so that the medical expenses could be donated for charity, this would be categorized as sacrifice so long as his motivation is sincere and true. Indeed, he sacrificed the resources not for sustaining his own life, but to sustain others' life. This, the author thinks, would be a case where euthanasia is justified. Of course, it may be difficult if not impossible to judge the motivation of the patient. He may say that he volunteers himself to be euthanized for the benefit of the needy, but his heart is seeking to expedite his death and at the same time engrave his name as charitable and honorable person. Indeed, there is a thin dividing line between suicide and sacrifice, but the motives and the intended consequences are in opposite poles. Although this sacrificial euthanasia is prone to misuse in its practice, the principle behind it is justified. Several conditions that must be considered for this to take place: (1) the patient must have a sincere motive in improving and saving the life of needy people; (2) the patient and his family, together with the doctors must thoroughly understand the consequences that will happen to the patient; (3) the will of the patient and the sacrificed resources will be passed on to the family, which have to be passed on to where the patient wants to donate.

To consider this case further, we will examine its aspects of the sanctity of life. Sacrificial euthanasia does not hold a low view of the sanctity of life. Instead, it exalts and respects the sanctity of life, as the patient's motive is to save and improve the life of others, especially those who are needy. Massive amount of resources could save many children who are starving and dying, as a replacement for sustaining the patient's own life. We have to be aware that more than 50% of the world population are living with less than US$2.5 a day and 24,000 children (under 5 years old) died every day.15 Is it morally permissible then, to sacrifice one's own sacred life? Not only is it permissible, but also supererogatory. In contrast to voluntary euthanasia which prioritize the patient's own interest to reduce suffering and hence disregard his sacrosanct given life, sacrificial euthanasia regards life as sacred, which the sacrificial patient fights for with his own life. Will this become a slippery slope for other cases such as involuntary euthanasia? In other cases, the patient's family may force an unwilling patient to sacrifice himself for good and hence this case will become involuntary euthanasia, not sacrificial euthanasia. Indeed, it may happen as all good things could be corrupted and manipulated for selfish benefits. Therefore, discernment should be well exercised on case-by-case basis so this commendable sacrifice will not to be abused.

D you think that euthanasia is justified and should be legalised? 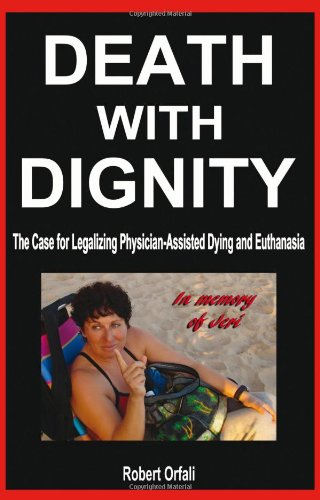 Death with Dignity: The Case for Legalizing Physician-Assisted Dying and Euthanasia
Buy Now

Euthanasia in general could not be morally justified due to the concern on sanctity of life, slippery slope, available better alternatives, etc. All this revolves around the interest of the patients, mainly in reducing their suffering towards their end. Palliative care also focuses on the life quality improvement of the patients, delivering and recovering the dignities of life before death. In all these cases, the author rules out any case of euthanasia as morally justifiable due to the aforementioned reason. However, when the patient himself shifts his interest from his own to others especially the poor and needy, voluntary euthanasia will become sacrificial euthanasia. In this case, euthanasia is neither akin to murder nor suicide. Instead it is a form of charity towards others, abandoning one's own interest for the sake of others. This sacrifice holds a high view of the sanctity of life as it tries to help the life of others. Although it is susceptible to corruption and manipulation (as all good things are), its principle is morally justified and highly commendable.