It is Well With My Soul- The truth behind the Hymn 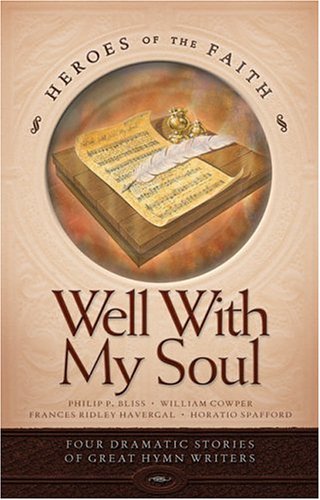 American Priestess: The Extraordinary Story of Anna Spafford and the American Colony in Jerusalem
Buy Now

Is it Well With Your Soul?

Many of us have grown up with hymn which we have sung. Some stay with us more than others. We sing the words and they inspire us but how many of us stop to think....I wonder how the writer came up with the words of this hymn? I wonder what their story was?

I found myself thinking these questions when one day while listening to my favorite Christian Broadcast, the hymn It Is Well With My Soul began to play. While studying the words I though to myself,'What could have inspired this person to write this hymn that has comforted people for many a generation?' Being the inquisitive person that I am, I promptly searched out a book that would give me not only a history of that hymn but of others as well. the results of this new found knowledge only persuaded me to love them more....

Horatio Spafford was born on the 20th of October,1828. He was a prolific hymn writer as well as a poet.He was great friends of the preacher D.L. Moody. It was the year of 1873 that God so ordered the circumstances that would bring about this timeless hymn. Horatio, being delayed by a business deal, sent his wife and his children ahead of him on a ship bound for France, where he was to meet them and they would vacation together. Even when sending off his family, he felt a sense of foreboding and changed their rooms on the ship. He waved good-bye to his precious family, the youngest Tanetta nearly two years old and prayed that God would keep them safe for him.

On the 1st of December,1873, Horatio received a message from Wales. He knew it was from his wife but she was supposed to be in France. His wife, Anna had sent him this message:'Saved Alone'. There had been a terrible storm on the ship in which his family traveled and all four of his daughters had perished. When Horatio was shown on the map where the ship sank and his children perished he thought to himself 'They do not still lie there. They are safe in their Father's arms and I will see them again for it is well with their souls.' It was then that he penned the hymn - even in grief his faith shone through. He had the hope no the Blessed Assurance to quote another hymn writer, that God is able to fulfill His promises and so he knew in the end it was well!

When peace, like a river, attendeth my way,
When sorrows like sea billows roll;
Whatever my lot, Thou has taught me to say,
It is well, it is well, with my soul.

Though Satan should buffet, though trials should come,
Let this blest assurance control,
That Christ has regarded my helpless estate,
And hath shed His own blood for my soul.

My sin, oh, the bliss of this glorious thought!
My sin, not in part but the whole,
Is nailed to the cross, and I bear it no more,
Praise the Lord, praise the Lord, O my soul!

For me, be it Christ, be it Christ hence to live:
If Jordan above me shall roll,
No pang shall be mine, for in death as in life
Thou wilt whisper Thy peace to my soul.

But, Lord, ‘tis for Thee, for Thy coming we wait,
The sky, not the grave, is our goal;
Oh trump of the angel! Oh voice of the Lord!
Blessèd hope, blessèd rest of my soul!

And Lord, haste the day when my faith shall be sight,
The clouds be rolled back as a scroll;
The trump shall resound, and the Lord shall descend,
Even so, it is well with my soul.