Joseph of Arimathea, Keeper of the Holy Grail

For centuries the legend of the Holy Grail has captivated people with its glorious and elusive nature. Anyone and anything linked to the Grail has fascinated all sorts of people—from scholarly and religious types to conspiracy theorists to regular fans of Arthurian legend. The keepers of the Grail are legendary for protecting the Holy Grail and reserving it for only those most worthy. These famous Grail keepers include Joseph of Arimathea, the original protector of the Grail from traditional legend.

Joseph of Arimathea, the original Grail keeper, has a rich history detailed in many medieval romances and Christian conversion stories. As a follower of Jesus Christ, Joseph has a brief but memorable appearance in the Bible:

When it was evening, there came a rich man from Arimathea named Joseph, who was himself a disciple of Jesus. He went to Pilate and asked for the body of Jesus; then Pilate ordered it to be handed over. Taking the body, Joseph wrapped it in clean linen and laid it in his new tomb that he had hewn in the rock. Then he rolled a huge stone across the entrance to the tomb and departed. (Matt. 27:57-60)

The Holy Grail has no Scriptural basis, but through a series of stories it became connected to the cup that Christ used at the Last Supper and that Joseph held to collect Christ’s blood at the crucifixion. It is important to examine the Biblical basis of Joseph of Arimathea in order to establish that he was a wealthy man and a disciple of Christ. Following the legends that ensued, Joseph was present at the crucifixion, while most of Jesus’s disciples were not. In further legends, Joseph’s connection to Christ is expanded upon.

Several medieval romances continue the story of Joseph of Arimathea, establishing him as the guardian of the Holy Grail. Robert de Boron’s Le Roman de L’Estoire Dou Graal, from the end of the twelfth century, focuses on Joseph of Arimathea, the Grail, and Joseph’s brother-in-law Hebron or Bron. This verse narrative “probably first identifies the grail as a relic of Christ’s crucifixion, the platter of the Last Supper, and the chalice used in the mass” (Crawford 88). In the story Christ appears to the imprisoned Joseph and gives him the Holy Grail, which contains Christ’s blood. Joseph becomes the guardian of the Grail, and the duty is later passed on to Bron.

Also sometime during the end of the twelfth century, Chrétien de Troyes wrote Perceval; of the Story of the Grail, a romance that finds the hero Perceval witnessing a strange procession at an invalid’s house; included in the procession is a grail containing a mass-wafer. Although Chrétien never completed Perceval, others began to add continuations to his story around 1200. The First Continuation contains references to Joseph of Arimathea; in the fifth episode the hero Gauvain is told that Joseph used the Holy Grail to catch and preserve the blood of Christ at the crucifixion. Joseph buried Christ’s body, was imprisoned and exiled, and with Nicodemus brought the Grail to England. From then on it was kept by Joseph’s line of descendants (Crawford 87-88).

Joseph of Arimathea soon became connected to Glastonbury, a small town in Somerset, England. Historians often contest Glastonbury’s Christian history due to its heavy reliance on folk religion (Bowman 274). Circa 1191, King Arthur’s tomb was supposedly “discovered” in Glastonbury, which caused the town to be publicly identified as Avalon, following Geoffrey of Monmouth’s identifying Avalon as the refuge for the mortally wounded Arthur.

By 1200, St. Joseph had appeared in French romances with either Joseph or his family responsible for relics from the Holy Land reaching Britain (Crawford 89). Because of the success of the Avalon-Glastonbury connection, the monks at the abbey incorporated Joseph into the legend of its foundation some fifty years later, due to his close connection to Arthur in the Grail legends.

However, the Joseph story did not immediately gain such success. Indeed, “it was not until the fifteenth century that St. Joseph of Arimathea became an acknowledged member of the Glastonbury canon of saints, or garnered any measure of fame in England” (Lagorio 209).William of Malmesbury wrote about the founding of the Church of Glastonbury. In his account, St. Philip sent twelve disciples into Britain to spread Christianity, and he appointed Joseph of Arimathea, his dear friend, as their leader.

They came to Britain in 63 AD, fifteen years after the Assumption of the Virgin Mary and preached the word of Christ. Joseph and the disciples built a chapel, “an unsightly construction no doubt but one adorned by God with many miracles” (Crawford 87). This small wattle church was revered as the oldest one in England (Lagorio 209). Glastonbury thus became the birthplace of English Christianity, with Joseph of Arimathea gradually rising to the forefront.

Curiously, the Holy Grail legend was not immediately accepted at the Glastonbury abbey. Around 1342, John of Glastonbury wrote Cronica sive Antiquitates Glastoniensis Ecclesie, recounting and enhancing the monastery’s history and the corresponding Joseph legends. Again, St. Philip’s twelve disciples with Joseph as their leader build the church and dedicate it to the Virgin Mary.

Other elements are added to the story. Melkin’s prophecy tells that Joseph of Arimathea receives eternal slumber in a marble tomb next to the abbey. With him in the sarcophagus are two white and silver vessels containing the blood and sweat of Christ. When his tomb is discovered, “it will be visible, whole and undecayed, and open to the whole world. From then on those who dwell in that noble island will lack neither water nor the dew of heaven” (Crawford 89). A couple times from the late twelfth century, the rulers of England encouraged the monks to find Joseph’s tomb (Barber 134). The work gives a genealogy naming King Arthur as a descendant of Joseph of Arimathea.

However, there is one significant omission in Melkin's prophecy:

In the multitudinous heap of the monastery’s relic collection, there is no grail. In a further citation of Arthurian legend, a parenthetic reference is made to “the vessel which is there called the Holy Grail”. No further comment on the grail is given. The “two white and silver vessels” of Melkin’s prophecy had become the relics associated with Joseph; Glastonbury tacitly rejected the grail. (Crawford 89)

Given the convoluted development of these Joseph legends, critics assume that the basis of the legends is the monks’ fabrications.

Over the centuries, the Glastonbury abbey collected stories about its origins and its group of saints. It was the typical medieval practice, however, to not discriminate between fact and fantasy, especially if the story benefited the abbey. This tendency led some critics to dismiss the Glastonbury legends as “monastic propaganda or forgeries,” but to be fair, “such fabrications by religious men, either to inspire the faith of the people or to serve the institution’s interests, were commonplace in the Middle Ages” (Lagorio 210).

Glastonbury needed an apostolic founder, as they were the most prestigious a church could have. Originally, the monastery chose St. Philip. Joseph of Arimathea would have to be an apostle to qualify for this position. If the monks looked at various apocryphal accounts, Joseph had a close relationship with the resurrected Christ, was sent on a mission to Lydda, and was the guardian of the Virgin Mary until her assumption. By these accounts, Joseph of Arimathea qualified as a close disciple of Christ and dedicated to the Blessed Virgin (Lagorio 213-14).

However, the monks of Glastonbury did little to emphasize the stories of Joseph until the end of the fifteenth century. Despite the huge political potential of John of Glastonbury’s chronicle—“if Joseph was a founder of Glastonbury, the abbey could claim to be on par with Rome, as an apostolic foundation—the idea was never developed” (Barber 133). Despite accusations that the Glastonbury abbey fabricated most of these stories, it was “remarkably reticent about a story which had the potential to make it one of the great shrines of Christendom, and Glastonbury never claimed to have the Grail” (Barber 134).

Nevertheless, critics claim that the Joseph legends are a result of the monastery’s fabrications and forgeries. According to Ferdinand Lot, Glastonbury “then embarked on a campaign to enrich the monastery with the donations of pilgrims and wealthy patrons. To attain this end, the monks simply invented stories, including the one that Glastonbury was the oldest church in England” (Crawford 91).

Actually, monasteries all over England had begun to write down their saints’ stories and the histories of their churches in response to the perceived threat of the Norman Conquest. The new Norman clergymen were questioning the English saints and the traditional customs of English Christianity. Additionally, there was a shift in the way people conducted business; people were forced to start writing things down instead of just using oral transactions. With the increase of literacy, the eleventh and twelfth centuries saw a change from oral to written testimony (Crawford 91-92). Those who do not believe that the monks were involved in forgery point out that such long-term deception is unlikely, especially for devout religious figures.

Pilgrimages of the Faithful

Whether or not the monks fabricated some of the Joseph legends, it is undeniable that Glastonbury became a popular destination for those fascinated by legends of the Holy Grail. In fact, Glastonbury attracted a lot of attention for its almost mythical Christian relics and connections. One legend says that when Joseph arrived in Glastonbury he planted a staff in the ground, which took root and became the Glastonbury thorn, which blooms twice a year. This legend is celebrated in December with the Holy Thorn Ceremony.

As previously discussed, Joseph is reputed for having brought the Holy Grail to Glastonbury, although some versions of the story have him bring phials of Christ’s blood instead. Significantly, some people believe that Jesus Christ himself came to the village with Joseph during his “missing years” before his ministry began. This legend is “a fine example of ‘Bible of the Folk,’ narratives ‘derived from the Bible and its silences’” (Bowman 274).

By the time of the Middle Ages, Glastonbury had become a major pilgrimage spot, having a large collection of relics and a library. During the Reformation, the Abbey was left to ruin. The twentieth century saw even more religious activity in Glastonbury, with a Celtic revival, New Age, and even alleged alien contact (Bowman 275). Even if the Glastonbury monks were reluctant to accept Joseph of Arimathea’s bringing the Holy Grail to their village, Glastonbury had enough religious fame to attract plenty of tourists and pilgrims for centuries.

Joseph of Arimathea represents the traditional keeper of the Grail, a religious figure responsible for safeguarding an important relic—a chalice connected to the Eucharist and that holds the blood of Christ. The Holy Grail remains a remarkable religious icon of mythic proportions, familiar to many people today either through religious study or numerous popular culture references.

Read more about the history and culture of Glastonbury

Discover more about the Grail, Joseph, and Arthurian Legend 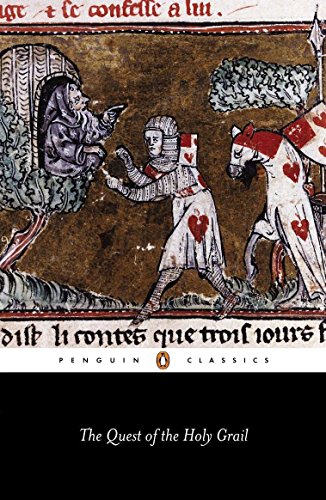 The Quest of the Holy Grail (Penguin Classics), Packaging May Vary
Buy Now