Medieval castles have always held a fascination for those who love history. Leap Castle, with its hauntings and history, will satisfy the historian as well as the most curious of ghost hunters.

The beauty of an ancient castle tends to hide the mysterious legends and ghostly tales till one is inside and begins to feel the past closing in on them. Leap Castle, in County Offaly, Ireland, is one such castle that has the beauty of the medieval architecture, and an enigmatic aura of mysteries and ghosts -- it is considered the most haunted castle in Ireland.

One who can look beyond the rubble and haunted rooms with the eye and appreciation of an architect, will see the true beauty of the castle.

The current owners of Leap Castle have managed to restore some rooms to their original charm and maintain a sense of comfort with old-world charm.

It is surprising that some halls and stairwells are very narrow -- it makes one wonder how ladies of the distant past managed to maneuver in these spaces in gowns with an abundance of fabric.

European fashion of the 15th-century ~

The castle was built in the fourteenth century and originally named "Leap of the O'Bannons". The O'Bannons, secondary chieftains of the territory, were ruled by the O'Carroll clan.

It was the O'Bannons who built the castle as a fortress on an enormous solid rock foundation, as if it is sitting upon a throne. It still stands like a guardian over the beautiful countryside surrounding it. The history of the castle is filled with violent years of battles and horrendous happenings that have left haunting memories which linger on throughout the castle, from top to bottom.

Leap Castle was attacked by the Earl of Kildare and partially demolished in 1516. The O'Carroll clan regained possession around 1557, twenty-five years after their chieftain, Mulrooney O'Carroll, died.

Family Feud in the Bloody Chapel ~

After Mulrooney died, family feuding arose as to who should be the clan leader. Two brothers who constantly fought for leadership against each other, ended their battle in what is now called "The Bloody Chapel".

One brother was a priest. During a mass he was holding for family members, his brother rushed in with his sword drawn and brutally murdered the priest. The spirit of the priest still wanders throughout the halls and returns to the chapel at night, where he died.

A small room just off the chapel is the source of hauntings from spirits who suffered a horrible death. An unsuspecting person would be led into the room then shoved toward a large hole in the floor, where they fell upon huge spikes eight feet below. If they were lucky, they would die immediately. Some did not and suffered unimaginable pain.

Their bodies were left there to rot. None were ever removed until 1922, when workmen were cleaning out the cellars and dungeon after a fire. It took three cartloads to remove all the bones of the ones who died in agony.

This type dungeon, where the only opening is at the top, is called an oubliette. The spikes are no longer down there, yet the haunted spirits let none forget the horror, for the aura of torment still lingers and gives one the chills.

Charles O'Carroll was the last chieftain of the O'Carroll clan at Leap Castle. Being at war with the Earl of Tyrone, Charles asked the MacMahon clan of Monaghan for assistance.

The Darby Family and the Elemental ~

Ownership of the castle passed, through marriage, from the O'Carroll family in 1659 to the Darby family from England. Johnathan and Mildred Darby, descendants of the English family, moved into Leap Castle in the late nineteenth century. It was not long before they encountered the most difficult ghostly apparition to tolerate -- a foul, antagonizing spirit that is called the Elemental.

This creature has a horrific odor like that of something rotting or decomposing -- some say it is like a rotting corpse odor. It is all hunched down into a grotesque shape and looks half human, half animal. It may be a shapeshifter, transformed from the "Lady in Red". The lady seems to be the most powerful and malevolent of all the spirits in the castle. Those who have seen her claim that she is quite tall with a lovely face. She is dressed in a billowing red gown and often appears on a balcony overlooking the sitting room on the first floor. One psychic said he saw her face lose the beauty as she transformed into the Elemental, the hideous creature that torments people and creates an atmosphere of heaviness, terror and evil.

The first recorded experience of the Elemental, was in the late nineteenth century as experienced by Mildred Darby. Mildred liked dabbling in magic, holding seances, and other means of trying to contact the other side. Without realizing what she was doing, Mildred apparently invoked a creature from the world of elemental spirits. An article, written by Mildred, appeared in the Journal Occult Review in 1909. She explained in detail what had happened. When standing on the balcony above the sitting room, she felt a hand touch her shoulder. When she turned, she saw the hideous creature, its vacant black eyes staring into her own. She was overcome by extreme nausea from the horrendous odor of the Elemental.

It is believed that playing around with the black arts by the innocent Mildred, who must have thought it fun, had opened a door to the dark side which allowed the evil creature to enter.

Sometime in 1970, an Australian purchased the castle and hired a white witch from Mexico to perform an exorcism in the castle -- to purge the castle of all spirits. After many hours, she emerged and said the spirits were no longer malevolent, but did not wish to leave. Whether or not the Elemental agreed to be considerate and not bother anyone anymore is rather doubtful -- yet only the current owners would have any information on that.

The term “white witch”, refers to a “good witch” who performs useful services with healing spells and other rituals.

Where did the elemental come from?

There are several theories as to where the elemental came from. One thought is that Gerald Fitzgerald, 9th Earl of Kildare had somehow put the demon there for the purpose of burning the castle down. Gerald was a practitioner of magick and had failed after several attempts to invade the castle.

An earlier belief was that Druids had summoned the elemental to reside in the castle and protect their sacred initiation secrets and magick.

There is also an ancient spirit of the O'Carroll family who died from leprosy in the castle. This could be an explanation of why the image of the face decomposes and for the horrible stench accompanying the spirit.

There are many who were killed in the castle, like the MacMahon clan, that could be the elemental seeking revenge. 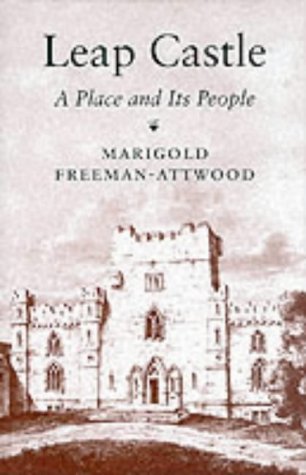 Leap Castle: a Place and Its People
Buy Now