After 20 years of growing and using herbs for remedies, crafts, and magic, this freelance writer and kitchen Witch loves talking shop.

Lavender is for lovers true, Which evermore be faine; Desiring always for to have Some pleasure for their paine: And when that they obtained have The love that they require, Then have they all their perfect joie, And quenched is the fire. -- A Handful of Pleasant Delights (1584); Clement Robinson and Divers Others

If there is a Heaven, and it has a scent, I bet it smells like lavender. It is one of my absolutely favorite scents that immediately fills me with a sense of peace and contentment. I can’t pass the lavender in my herb garden without stopping to stroke it and smell my fingers. A springtime incense just doesn’t smell right without at least a hint of lavender.

I’m not alone. If you look up ‘quotes about lavender’ you will be treated a lengthy list of herbalists, magical people and writers singing its praises, going back for many centuries.

There's No Excuse to Not Have Lavender!

The grayish-green leaves and tiny purplish buds on this shrubby plant are attractive in beds and borders, in window boxes or spanning acres of fields—but it’s the scent that gets us!

Lavender should be a staple in any herb gardener’s garden, and in every Witch's cupboard— it’s uses in magic, crafts, cosmetics, culinary and medicinal uses are seemingly endless. Not only that, but it’s pretty easy to grow almost anywhere. Let’s learn more about lavender.

*Applies to most of the common species but some subspecies might vary in properties.

Get Your Lavender Patch Started

Lavender is pretty easy to grow. You can plant it in the ground or in pots. A windowbox of lavender in a sunny window or on a doorstep will provide you with a nice amount to harvest.

Lavender will grow best in the ground in zones 5-10, except in the deep south where it is very humid (this is where I live so I speak from lots of experience). It’ll be very cooperative from October-May, but it can be a struggle to get the plant to survive the summers. Lavender hates hot, humid days—so it’s best to stick it in pots made of porous materials like clay, and use plenty of light organic matter in your soil mix to keep air circulating. Give it a chance to dry out a little between waterings, and perhaps provide it with some shade during the mid-day heat or afternoon downpours. They are very prone to fungus and mold—so if you can’t get it to survive the summer, just start over with new seeds or plants in late summer/early fall.

Cuttings are really the easiest way to propagate lavender. You can buy a starter plant and as it grows, simply cut off some 3 to 5 inch-long branches as it grows (avoid the woody stems; go with the soft ones).

Strip off the lower leaves and insert it into potting soil or peat moss, water it moderately and leave it until it takes root (about 6 weeks to 2 months). One lavender plant, harvested every few weeks for cuttings, can turn into dozens of new plants.

If propagating by seed, just sprinkle seeds in starter pots and cover very, very lightly with potting mix or peat moss. Put it in a sunny, warm spot and water lightly (you want the soil moist, not damp). In 2 to 4 weeks, the lavender plants should sprout. Thin so they're 2 inches apart.

When the plants are about 3 inches tall you can transplant them. Harden off the plants very gradually if you're transplanting them in a different place.

Lavender isn’t generally picky about soil quality, but it does prefer it kind of airy and with really good drainage so it can dry out a bit between waterings. Moderate watering will suffice. Avoid mulches that foster mold and fungus, like wood chips or compost. Lavender would much prefer a much of gravel or sand.

The plant prefers phosphorus-rich fertilizer, so add a bit of bone meal in the fall to give it a boost for the winter. If you’re planting in late summer/early fall, give it a boost at the start of the new year.

Prune-harvest your lavender leaves or spikes of buds. Cut branches so that you open up the plant to increase air circulation between the branches. Don’t harvest more than 1/3 of the plant at a time or you may weaken it.

A Lavender Path - What a Welcoming Sight!

You can use lavender fresh or dried. Throw the fresh buds into marinades, sauces, salads and desserts (you’ve got to try lavender ice cream).

It’s easy to dry lavender, however, in a dark, dry area with good air circulation. You can dry it by hanging bunches upside-down (cover with paper towel or cheesecloth to avoid dust) or place it in a box covered with paper towel-- just shake it a couple of times per day.

Dried lavender can be added to tea or spice blends. Add a dried sprig of lavender to sugar or salt containers to create a pleasant-tasting spice with an appealing scent.

Beyond the kitchen, lavender is a great plant to use for crafts such as herbal sachets to keep drawers smelling nice or to repel mosquitoes, dried and fresh flower arrangements and many other kinds of floral crafting.

Add a few drops of lavender essential oils to your floor rinse water, washing machine rinse cycle, or on a cotton ball tucked in the corners of closets. Your home will smell beautiful.

*IMPORTANT MESSAGE TO READ: DO NOT take the following as medical advice. I am simply providing information about how herbs have been used medicinally, both in ancient and modern times, for those interested in herbalism. I may even relay my own experiences but I DO NOT RECOMMEND that YOU use any herbal remedies without first consulting a qualified professional. Please remember that even common culinary herbs can be dangerous when taken in quantities that exceed normal food seasoning.

Warnings: Some possible side effects of lavender include:

Drug Interactions: According to WebMD:

If You Don't Have Fresh Lavender, Stock Up on Dried Buds 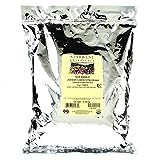 Please talk to your doctor or a qualified herbalist if you are planning on taking lavender medicinally, either internally or externally. Keep in mind: Not all lavender oils or herbs are fit for use on humans, as they were designed for crafts and non-medicinal uses. If you do get cleared by your health care provider to use lavender make sure you are taking food grade or medical grade products.

Have you ever used lavender medicinally?

Lavender is mostly known for its use in love spells. Women in particular should use lavender to attract men. It was so effective in arousing men that prostitutes used to wear it to attract customers. Bathe in a lavender bath, wear a lavender oil or carry lavender sachets and mojo bags. Use lavender oil to anoint and dress candles in love spells and lavender incense to invoke love deities. In the Middle Ages, maidens drank lavender tea on the Feast of Saint Luke (Oct. 18) to dream of their true love.

If your lover is cruel to you, wear lavender to appease him. If you are an abuse victim, rub some lavender onto an arrowhead and keep it as a charm to protect you (though I highly recommend seeking help or getting away from your abusive situation as well).

Lavender aids dream divination. Make a pillow or pouch of lavender and keep it under your regular pillow. Think of the thing you desire as you lay down to sleep. If you dream of your desire in any way, it will come to you. If you dream of other things, or can't remember your dream, it is not meant to be right now.

Lavender pillows are also used in charms to calm nightmares and help soothe people to sleep. For restless children who have bad dreams or who don't like to go to bed, stuff some lavender buds into a teddy bear or rag doll, then sew it up tight. Enchant the doll to induce sleep and give it to the child. For rowdy children, fasten a spring of lavender to their shirts.

Lavender is relaxing and aids meditation when burned as an incense. Lavender may also be used to help one see spirits according to some sources, so try lavender incense while attempting spirit conjuring.

Carry lavender to ward off evil and undesirable spirits. In Spain and Portugal, lavender used to be thrown into the St. John's Day fires (June 23, rooted in Summer Solstice balefires) to purify and ward off evil spirits. Pagans throw them into Midsummer bonfires as offerings to the Gods. Another Midsummer connection comes from the website Joy of Lavender: "At midsummer mix chamomile , lavender, mugwort, and rose petals to call upon the sprites, fairies, brownies, and elves."

Add lavender to your healing or purification baths. This is not only done magically but may have some medicinal benefits (please see medical uses and warnings in sections above). This was typically done in ancient Greece and Rome, because the lavender not only magically purified and relaxed people but also reportedly helped sore muscles and aches. You may also use a bundle of lavender tied together as an aspergil (dip it in blessed water and then shake it to sprinkle the blessings about on a location, object or people). This was reportedly done in Solomon's Temple.

In the Middle Ages, lavender was an ingredient in "Four Thieves Vinegar", which was used as a tonic to ward off the black plague.

Lavender is believed to such a powerful herb that helps promote clarity of thought and focus that it can be used to aid in any magical working.

I personally like to mix it in equal parts with white sandalwood powder and burn it as an incense in the springtime to purify the home and honor the Maiden.

"Wear when nervous or upset to calm you down. Stand before a mirror, and while looking into your eyes, anoint your body." 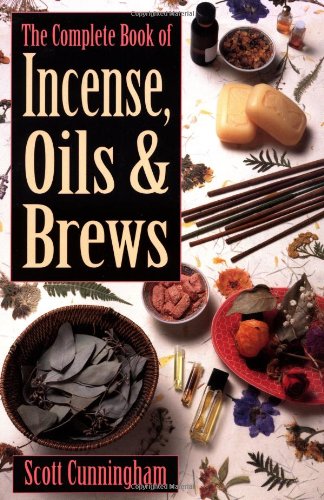 The Complete Book of Incense, Oils and Brews (Llewellyn's Practical Magick)
This book has proven an **invaluable** resource for me over the years. Cunningham's knowledge of herbalism, folklore and magic is vast, and his presentation of the topics are friendly and approachable. Any Witch who works with herbs (especially Wiccan Witches) should have this reference on their shelves. I still have my 1989 copy, with the original cover, all ratty and dog-eared from years of love.
Buy Now