This is the story of Jenny Cockell, a registered Chiropodist (Podiatrist) from Northamptonshire in the UK. Jenny has hit the headlines recently because she has a remarkable belief, a belief that many would find incredible - some would say impossible. Jenny Cockell believes that she has lived before, and says that she is the reincarnation of an Irishwoman called Mary Sutton who died 62 years ago.

This strange story began for Jenny when she was only a child. She described herself as a nervous and withdrawn child that suffered with a strange recurring dream of Mary's death, with memories of a multi-paned window in a brightly lit white room that felt far from home. She would often wake up sobbing because of the vivid memories of "Mary's death". Not so much because of the death itself, but because of her fears - one might say near panic - for the eight children that she was "leaving behind".

When at play, her favourite games always seemed to allude to the domestic chores that were part and parcel of "Mary's" life. She reports how she would enjoy sweeping out her room and tidying away her toys far more that she enjoyed playing with them. Another of her games was "baking bread" in which she would make bread by mixing grass seeds with water. Like many children, Jenny was also artistically inclined, and would spend happy hours drawing maps of the Irish village that Mary had once lived in.

Jenny described herself as a solitary child who lived for the most part,in a "dreamlike" state of mind. Her dreamy nature did her no favours when she went to school, where she was marked out as a "slow learner", despite the fact that she possesses a high I.Q. and is now a member of MENSA, the "genius" society.

Although Jenny's memories of Mary's life were incredibly vivid and realistic, she still referred to them as just dreams. It was some years later, in 1988 - when Jenny was married with two children of her own - that she first experienced hypnosis, and it changed her world.

Under trance, she became Mary “I cried as she cried ....I knew her pain as my own ...I was Mary, and the past had become very real. I could smell the grass on the slopes outside a large farmhouse, and I breathed in the fresh spring air ... I seemed to be free to wander through the places I saw — tangible, vivid places. I felt the wind in my hair; I could touch and smell the air as though I were there”.

Search for her past life.

The hypnosis seemed to suggest that these were no mere "dreams" - Could this be something more? could this be evidence for reincarnation?

She was determined to find out. And so began a quest, an unrelenting period of investigation and research. Jenny consulted maps of Ireland and as she pored over them, she was brought back again and again to the village of Malahide in Co. Dublin. More research revealed that in the village, on Swords road, once lived Mary Sutton - Her Mary.

Excitedly, she travelled over to Ireland and to the village. Although some things had changed, there was also much that she recognised from her "former life". The jetty that she remembered often waiting on was there, but now constructed in concrete, and not the wooden structure she recalled. The general layout of the village was just as she remembered with the butcher shop occupying the exact place it stood in her hypnosis recollections.

Convinced that Mary's children were still alive, she set out to find them. She took out advertisements in the Dublin Evening Post and the MENSA magazine, and sent out questionaire after questionaire in order to aquire the knowledge she sought. The research seemed to pay off and produced some surprising results.

Voice from a previous life.

One of Mary's children that Jenny was able to track down was 75 yr old Sonny Sutton, an Irishman now living in Leeds in the UK.

Jenny telephoned Sonny and spoke to him at some length. She was able to describe to him, the story of his own childhood. This was no vague tale, but a diary of his childhood that was replete with details only a mother could know. When the phone call was over, a rather shell-shocked Sonny Sutton turned to his wife and said "'I think I've been talking to a ghost ... I'm sure I've just been talking to my mother.'

That phone call led to a meeting between the two. Sonny said of that meeting "'I didn't know what to think ... We are all Catholics, and Catholics don't believe in reincarnation. But when she came up and I saw her get out of the car, I could see my mother in her. There was a bond between us from the beginning.'

Following many hours of talking and reminiscing, Sonny has now come to accept that Jenny is the reincarnation of his mother Mary. He was able to explain many half-remembered incidents that continued to perplex Jenny, and told her how Mary had actually died in childbirth and how his abusive drunkard father had sent his brothers and sisters away to be looked after by various institutions and convents following her death.

A past life and family

Jenny spurred on by this success continued to search for the other children. Sonny's brothers Christy and Francis were the first to be found, then in 1990, following another ad in the Dublin Evening News, Jenny made contact with Betty (Elizabeth) - the baby who's birth resulted in the death of Mary.

Betty had been brought up by her uncle and aunt, but was never told this and had believed for the past 60 years that they were her mother and father. Despite a pleasant childhood, she had always suspected that something was not right between her and her "mother", 'There was something stand-offish about her, never the closeness there should be between mother and daughter.'

The next of the children to be found was Phyllis who was only eight years old when she was taken away to the convent. She was astonished to discover that she had been living only a mile away from her sister Betty for thirty years - They both used the same shopping centre.

The end of a chapter

Jenny's driving aim was to bring her surviving "children" together again. a task in which she seems to have succeeded admirably. She is now a firm family friend of Betty who was of course too young to have had any memories of her mother Mary.

Francis and Christy, prevented from believing in reincarnation by their Catholic faith nevertheless believe that their mother is "working through Jenny", who is regarded as their "Second Mum". Phyllis believes that her mother's soul has transferred to Jenny, and says 'I feel I'm protected when Jenny is there,' Sonny, of course, believes that Jenny is the reincarnation of his mother, but all are unanimous in their gratitude that Jenny was there to re-unite the family. 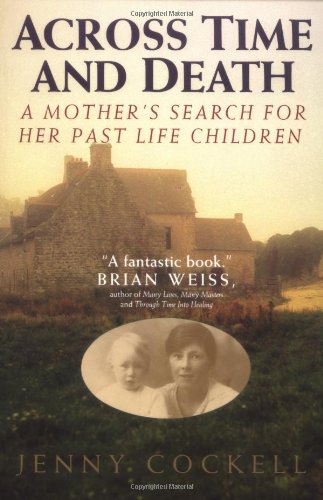 Across Time And Death: A Mother's Search For Her Past Life Children
Buy Now

Jenny has since become a successful author following the publication of her first book "Across Time and Death: A Mother's Search for her Past Life Children", in which she tells the story of what she believes to be the reincarnation of Mary Sutton.

A TV movie adaptation of Jenny's book, was aired by CBS in 2000, with Jane Seymour taking the title role. In the movie, however, Jenny Cockell's character was no longer English, and was re-written as an American citizen called "Jenny Cole," .