Meaning : The guru is none other than the creator, Lord Brahma; he verily is Lord Vishnu, the preserver, and the truly is Maheswara, the destroyer. He is the supreme Brahma himself. To such a guru I offer my salutations.

Lord Brahma is part of the Hindu Trinity and is the Lord of Creation. Lord Brahma represents the universal mind as creation is the work of the mind and the intellect. He is the generator of life on earth, a role which he performed by creating eleven 'Prajapatis' for fathering human race. Theologically, he is the uncreated creator and the self-born first person. Mythology describes Brahma as springing from a Lotus from the navel of Vishnu. Brahma has four heads and the four Veda's (Rig Veda, Yajur Veda, Sama Veda, and Atharva Veda) are said to have sprung from his heads. Brahma is depicted as carrying a rosary in the upper right hand, a book in the upper left hand, a kamandalu (water pot) in the lower left hand and bestows grace with his lower right hand. He is seen sitting on a swan or standing on a lotus. His consort Goddess Saraswati manifested out of him and all creatures of the world resulted from their union.

Given below are the Brahma Beeja Mantra and Gayatri Mantra. 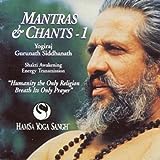 Chanting the Brahma Mantra helps us to fulfill the four aims of life righteousness, Prosperity, Pleasures and Liberation. Brahma Mantras are also good for those who wish to gain knowledge. Given below are the Mantras of Lord Brahma.