Truth Is Stranger Than Fiction: The Experience of a Disciple of Swami Sivananda with Sri Sathya Sai Baba

Whenever anybody speaks about how they first came to Puttaparthi or how their plan to come to Puttaparthi went awry, I am reminded of the experience of Mr. Arun Mandale. His experience borders between the realms of the bizarre and the fantastic. When I first heard it from my friend and classmate in University, I was simply dying to meet the man who experienced it. A few months later, Swami gave me the opportunity to meet him and hear the experience firsthand. My jaw simply dropped and my hairs stood on their end as the narrative came to a close. More than anything else, my heart sent prayers of gratitude to Swami. I shall simply narrate the story as he told me and leave the readers to experience it in their own ways.

Mr. Arun Mandale resides in the city of Indore in Madhya Pradesh and was the Samithi convenor there for a long time. This story is based in the late 1990’s. I wish to confirm the exact dates the next time I meet him.

Being the convenor of the samithi, bhajans were a regular feature every Thursday in Mr.Mandale’s house. One day, he noticed that there were quite some strangers who had come for bhajan at his home. As weeks passed by, the number of such ‘strangers’ or first-timers kept increasing. Intrigued at this apparent sudden spurt of the ‘devotional quotient’ of his city, Mr.Mandale approached one such ‘stranger’ after a Thursday bhajan session.

“Sairam sir. You seem to be coming here for the first time. May I help you in any way?”
“Ah! Yesterday evening there was a sadhu (mendicant / monk / hermit) who came to me at the bus stand. He told me that if I wanted peace of mind, I should visit a certain address on Thursday. The address he gave me led me here!”
Needless to say, Mr.Mandale was pleasantly surprised.
But then, matters got more intriguing.
Everyone - each and every one - of the ‘strangers’ had a similar story of a sadhu guiding them to that home for bhajans! The only variable in the stories was the venue where they met the sadhu. For most however, the sadhu had accosted them at the railway station. Unable to bear his curiosity any longer, Mr.Mandale decided to investigate.

If anyone says that he/she is completely intrigued now, they better gear up for something much more wondrous! The story starts moving into the realms of the fantastic now.

With his daughter, the bewildered samithi convenor wended his way to the railway station in Indore. After some searching, his eyes fell upon the sadhu seated silently in one corner. Mr. Mandale told his daughter to fall at the feet of the sadhu in respect. The sadhu blessed her and now Mr. Mandale sought his blessings. As he started to move towards him, the sadhu looked up. Within a few steps of reaching him, the sadhu held up his hand and said in a stentorian voice,
“Stop!”
Mr. Mandale froze in his tracks as he continued to say,
“If you wish to come close to me, I have two conditions. The first is that you shall not fall at my feet. The second is that I shall fall at your feet! Are you game?”

Curiosity levels peaked in Mr.Mandale and he was ready “to do anything to get to the bottom of what was happening - even giving a padanamaskar (touch of the feet)!” Having fulfilled both conditions, he sat by the sadhu along with his daughter. The sadhu began to speak of his own volition.

A story that will drop down any jaw!

“Listen to a story. I was barely aged 6 when my father submitted me in devotion to my Guru - Swami Sivananda. I joined his ashram (hermitage) and totally submitted myself to my Guru. My guru was my everything - mother, father and God too. It was then that a young lad with a thick black mop of hair arrived to our ashram at Rishikesh.”

This is an obvious reference to Swami’s visit to Swami Sivananda’s ashram on 22nd July,1957 which has been recorded in the first part of the biography, Sathyam Shivam Sundaram.

On the twenty-second of July Baba left New Delhi by car for Rishikesh. Swami Sivananda's monastic disciples escorted Him from Hardwar. When He reached Sivanandanagar at 6:30 that evening, Swami Sivananda called a special gathering of the disciples at the Ashram and offered Baba a hearty welcome. While Sivananda greeted Baba with folded hands, as was his custom, Baba acknowledged the greeting with His posture of the Hand which means, "Do not fear," a sign that has given peace to thousands of troubled souls.

He then materialized by the mere Wave of His Hand a magnificent Rudraksha garland of 108 beads, a rosary made from a berry. It was of exquisite workmanship, each bead encased in gold, and all were strung in gold with a five-faced king-bead in the center. He presented it to Swami Sivananda Saraswati. He also manifested a large quantity of Sacred Ash and applied it to the sage's forehead. That evening when the Swami entered the Satsang Hall wearing the unique garland, everyone was awed by its lustre and workmanship and the miracle that brought it forth. Swami Sivananda spoke of Bhagavan and His message. He expounded on the efficacy of Namasmarana, the remembering of the Name of God, and appealed as a medical practitioner for a daily dose of dispassion to be taken by every person along with the regular diet of the Lord's Name.

It came as a pleasant surprise to many in the Ashram when they saw, on the day Baba departed, Swami Sivananda enthusiastically taking Baba around his hermitage, for on the day Baba reached the Ashram, and for a number of days thereafter, the Swami had been pushed around in a wheelchair!

“When my guru touched the feet of this orange-robed figure, much younger than him, I was shocked. How could he being the Master, bow down to anyone else? It was then that the guru revealed to us that the Krishna he had adored had finally presented Himself in his ashram. I was amazed at this yogi whom guru had called as Lord Krishna.”

This young boy now began to have strange experiences in his meditation.

“Whenever I sat in meditation, in the deepest moments, I would see this new yogi in my forehead, in between my eyebrows ( Bhrumadhyastana as it is known). This went on for years. In 1963, my peerless guruji gave up his body. We continued to stay at the hermitage in Rishikesh, practicing our meditations and the master’s teachings.”

The sadhu, along with others in the ashram, would move to caves in the Himalayan mountains where he would spend the entire summer and spring months. At the onset of winter, they would all return to the warmth and safety of the ashram to continue their penances. It was during one of those sojourns in the cave that the sadhu met Sri Sathya Sai Babafor a second time.

“One day, in the cave, I noticed that there were no matches. Now, I had to traverse miles back to civilization for a piece of match. It was at this time that suddenly, the yogi I had seen long ago in my guru’s ashram, walked into the cave. He gave me the matches I needed and moved on. After that day, on many other instances, he came to my cave and gave me things that I needed.”

Our friend, the sadhu, had assumed that Swami was another hermit staying in the Himalayas. He was amazed that this lad was able to gauge his needs and was grateful for his timely appearances. One day he felt that it would only be basic courtesy to visit the yogi back in “his cave”! Was he in for a surprise!

“When I made some enquiries in Rishikesh, I came to know that this yogi was not a resident of the Himalayas but stayed in some place in South India. However, having determined to meet him, I decided to make the journey to South India. I was advised to take the train to the city of Madras (present day Chennai) and I did the same.”

The sadhu landed in Madras which was a big city and was lost. As he wandered about the city, he saw a photograph of Bhagawan Sri Sathya Sai Baba. Hungrily, he rushed to the spot and made enquiries. Finally, a man helped him with directions.

“Take the train to Dharmavaram. From there, you will get regular buses to Puttaparthi. That is where Sathya Sai Baba resides.”

A grand (anti) climax to the sadhu's search?

Very often, we think that we have come to Puttaparthi. And if anyone asks us how to reach Puttaparthi, we say, “Take a flight/bus/train/car to Bangalore/Puttaparthi” and so on. That is an answer of course. But is that the right answer? The story now moves into the realms of the completely bizarre. It is only fair that I allow the sadhu to complete his story in his own words.

“I took the train and reached Dharmavaram. It was late in the evening and I was told that the last bus to Puttaparthi had already left. I would be able to complete my journey only early the next morning. I slept on the comfortable platform in Dharmavaram. Being accustomed to sleeping on the icy rocks of the Himalayas, the platform was a soft bed for me!”

“The next morning, I woke up and it was pitch dark all around me. I was a bit confused. I waded my way in the darkness only to walk out of my cave in the Himalayas! I was shocked. I rushed back in and heard a voice from within. It said

‘Child! When your time comes, I shall call you to Parthi.’

I was simply dumbstruck”, the sadhu completed.

As Mr.Mandale sat in silence, digesting the profundity and magnitude of the experience this sadhu at the Indore railway station had narrated to him, the sadhu continued,
“I have never been to Puttaparthi till this day. You have been there, seen Him, talked to Him and touched Him. Tell me, is it not right that I touch your feet and not the other way round?”

As Mr.Mandale completed his narrative, there was a glimmer of a tear in his eye. I was too overwhelmed to speak.

One thing I know for sure - there is only one way to come to Puttaparthi and that is - if He calls!

Puttaparthi was best accessed via Dharmavaram those days 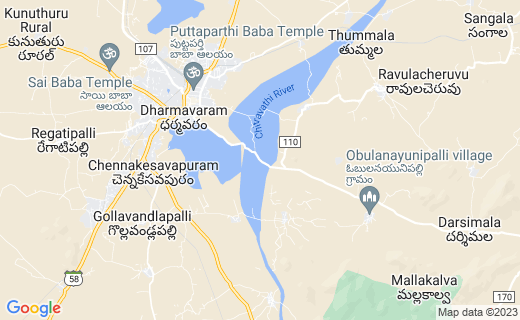