Significance of Mars in Horoscope, Remedies and Mangal Mantras

Significance of Mangal in Horoscope and Remedies

According to Astrology, Mars or Mangal is the planet of power, strength, courage and aggression. Astrologically Mars is seen as a cruel planet. By nature Mangal is energetic and lustful, adventurous, wrathful and liberal. Mangal is extremely hot-tempered and very sensitive to any arrogance on part of his devotees. He bestows financial gain and relieves all difficulties, particularly of illness, debt and enemies of his devotees. It is instrumental in the acquisition of landed properties, affluence in work etc. In Vedic Astrology, Mars is also known as Mangal, Angaraka, and Kuja. These names in Sanskrit mean, "auspicious, burning coal, and the fair one".

Mars happens to be natural signification of Stamina, courage, anger, desire, opponents, immovable properties, friends, energy, violence, brother and siblings, accidents, ambition and enemies among other things. Mars also governs blood-related problems, blood pressure, muscles and bone marrow in the body so a malefic influence of the planet is likely to affect the same. Mars plays the role of the protector of Dharma, the sacred path and purpose in life that each of us follows. A strong Mars in the Horoscope give one the energy, will, confidence and independence to carry out our endeavors. Mangal rules over the sidereal signs of Aries and Scorpio. Mars exalts in Capricorn and falls in the sign of Cancer. It is the most comfortable in the 10th House. Mars stays for 1.5 month in each zodiac to complete the cycle in 18 months. The position of Mars is very important in any horoscope.

As a God, Mars is often described with a red body exemplifying the natural color of the astronomical body in the sky. Mangal is also a Kshatriya and sits on a ram. He is a handsome youth having a short stature and four arms, two of which carry a trident and a mace. His build is slender and appearance youthful and his blood-red eyes burn fiercely. In terms of Marriage the position of Mars is of supreme importance as it signifies passion, husband, marital knot, sex etc. Mangal is known for positively or negatively affecting the chances of Marriage. As per astrology, the placement of Mars in the 4th, 7th, 8th or 12th house from ascendant, Moon and Venus results in the Mangalik Dosha. Mangal Dosha leads to delay in marriage, dissatisfaction in married life, incompatible sexual preference, inadequate longevity of spouse, low adjustment potential, lack of satisfaction with own spouse and hence leading to extra marital affairs. The way out for this is to Marry another having a Manglik Kundali as well. However the Manglik or Kuja Dosha can get cancelled under certain circumstances. So before assuming yourself to be a Manglik get your Horoscope examined by a good astrologer.

Given below are Remedies for pleasing Mangal 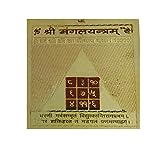 In order to reduce the Malefic Effects of mangal, the planetary mantras also can be chanted.

Meaning : I offer my obeisances to Mangala, who was born from the womb of Goddess Earth. His brilliant effulgence is like that of lightning, and he appears as a youth carrying a spear in his hand.

To remove the malefic effects of mars the mantras can be chanted using 108 Beads Rudraksha Rosary 11,000 times within 20 days. Also perform Mangal Puja with red flowers and red sandalwood and begin the recitation on a Tuesday during the bright half of the Moon. Presence of 'Mangal yantra' at the place of recitation may help in achieving the desired results faster.