According to Hindu Mythology Rahu swallows the Sun or the Moon causing eclipses. The story of Rahu is quite interesting. According to the Puranas, Swarbhanu, the son born to the Asura King Viprasithi and a Queen Sinhika, consumed amrut by disguising himself as a God and sitting in between Sun and Moon. Once Mohini (a Lord Vishnu avatar as female) who was distributing the holy nectar of immortality noticed the mistake Sharbhanu was assaulted with the ladle resulting which his head separating from the rest of the body. As he had already consumed amrut he did not die. Swarbhanu pleaded to Vishnu for moksha and accordingly a serpants body was fitted to his face which we call Rahu and the serpants head with his body became Ketu.

Rahu is normally depicted as a dragon head with no body riding a chariot drawn by eight black horses. Though not a Planet Rahu is counted as one of the navagrahas. Rahu is considered as a malefic and its effects are equated with that of Shani by Vedic Astrologers.The metal representing Rahu is lead. Its element is air and direction is south-west. Rahu is the ruler of number 4 in Indian numerology. Rahu is also the lord of three nakshatras : Ardra, Swati and Shatabhisha. The dasha of Rahu normally last for 18 years out of which the 6th and 8th years are the most troublesome ones. When the Rahu is afflicted one faces several miseries and obstacles in the way of success and remedies should be done to reduce the ill effects. Some such remedies are

Given below are the Mantras of Rahu. 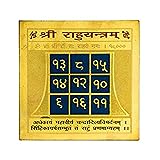 I offer my obeisance’s to Rahu who was born from the womb of Simhika and who has only half a body yet possess great power, being able to subdue the Sun and the Moon.

These mantras are normally chanted on 108 japa beads and may be recited for 18,000 times within 40 days during night and puja should be performed with blue flowers and sandalwood. One can begin the recitation of the mantra on a Saturday during the bright half of the Moon. Presence of Kali and Durga yantra at the place of recitation may help one in achieving the desired results faster.

Rahu Deva, I pray to you. Please forgive my sins and give me your blessings.

If Rahu is affecting your life adversely then the above mantra can be chanted 2 times a day to reduce its effects one in the morning before breakfast and one in the evening before dinner.