Abstract view of the meaning of Life

Life, what is it? What can we say about our own life? Is life real, or merely an imaginary depiction of our own sense of being? Who are we really? The age old question of the meaning of life starts surfacing in our mind upon reading this. If there are no objective values, then is life meaningless? I must say that it is quite fascinating, and interesting to reflect upon all the uncertainty that revolves around our corporeal entity; the existence of our individual self.

Life, referring to the lives of all the populations of this world, is something we can never fully comprehend. To understand life is to be on par with its creator, and of course, such a thing is and will always be impossible. In other words, for us to comprehend something, we need to be able to conceptualize its existence and objectivity, and in order to do so we must have a greater reasoning capability than what we are attempting to understand. By this I mean, the created cannot and will not understand its creator. Likewise, we as humans are unable of understanding life, because if we were able to comprehend life wholly, then it would mean we are equal with its creator, God. Grasping a feasible identity of ourselves is a task that many pursue until their death and hardly ever do they truly realize their own identity and place in this vast universe. Life is a complicated, yet delicate opportunity that we are all given we all the choice of which path to lead it towards.

In my early teenage years I thought of life as simply the timeframe from birth until death. As I got older and got partially exposed to some of life’s darker sides, I became aware of a certain correlation between my life and God. I never really understood religion nor any of its philosophies, and despite the fact that I was never able to understand why I did the things I did in life or why they happened to me, I always sought out a higher intelligence that could point out a reason to my own and other individuals’ actions.

Each event that occurred in my life caused me to become aware to a whole new level of thinking. With each time something happens, I think what I learned from it is something that revolutionized my way of thinking, which at that moment of my life, I believe is the big picture and I’ve learned it all. The big picture is something we strive with our lives to be able to perceive and in the end it is just like our universe: the bigger portion of the image we see, the more we realize that we know and see so little of it. I maybe never be fully aware of the reason for each major event in my life, but what I do know is that everything that happens, does not happen in vain. Regardless if we believe in fate or if an event was destined to happen; each occurrence is what we make of it. That will in turn shape who we become. Our personality is a product of how we choose to handle each event of our lives.

Confused much? Don’t be. Try to conceptualize the ideas I’m attempting to manifest. To better understand, picture this scenario: a given person is content with their fulfilling life, and one day they are struck with a most unfortunate event. This part I refer to as “The Hit”. That event will alter the course of the way their lives will continue to run. However, the direction in which that course is altered to depends on how that person deals with that unfortunate event and more importantly, what they choose to do with the knowledge they learned out of it. Still don’t get it?

Alright then, let’s continue: At that exact moment the event occurs in that person’s life, or the moment they become aware of it, they will not know how to react and will then begin reflecting and thinking “where did I do wrong?” This part I call “The wake-up”. The unfortunate event forces that person to wake-up and realize all the mistakes they’ve made. The person will feel hopeless that they let this happen and in pity with the fact that they can’t do anything to alter the past and prevent it from occurring. They feel, regret, remorse, guilt, pain, stress, anxiety, and all this is part of the wake up. After something bad happens, we usually try to focus on the better things in life and the ideals that make us a better person in the long run; such as education, self-reliance, personal integrity, strong self control, etc. After the person has had some time to realize what just happened to them, they would then begin thinking ahead and saying to themselves how stupid they are for letting this happen and how they will not let this happen ever again and that they will learn and all this has lead them to realize their mistakes and now they will become a better person. At this point, the person has the illusion that they will get out of this mess and once they do, they’ll focus on becoming different because now they believe that they now have a broader perspective of life. This part I call “The shadowed illusion” because of the illusion the person has that they now see the bigger picture. In reality they are seeing an illusion of within a portion of the shadow of the big picture. Big picture, you ask? You’ve read it several times and still confused by its meaning? It is the grand old image, the unfiltered scope by which life can be seen through; the ultimate idea of the understanding of how a person’s life works upon the realization of their own ignorance which they feel that they previously had before their “wake-up”.

Moving on, this person now thinks he or she has figured out a way out of their situation and once they are free of it, they’ll no longer act in ways that would allow a reoccurrence. However, once they are free, their worries end along with their search to improve their life. A reoccurrence isn’t far from likely, and once it happens again they feel even more regret for not learning the first time. This second time will be an even more powerful wake-up and have an even more serious impact. The intensity of the impact an unfortunate event has on altering the course of a person’s life is directly proportional to the magnitude of the aftermath of which that event can ultimately have. In other words, harder it is for you to get out of a certain mess left by an unfortunate event, the greater reflection will be done on your own life and the bigger the “wake-up” – the impact it will have in changing your life.

“The irony of man's condition is that the deepest need is to be free of the anxiety of death and annihilation; but it is life itself which awakens it, and so we must shrink from being fully alive. (Becker, Ernest)”

Okay so we know that an event can ultimate have life changing results, however, what bearing does a person’s attitude and choices have in relation to deciding in which direction the course of their lives will be geared towards after an unfortunate event? Well the person I describe above for example, he or she has the choice to use that unfortunate event to better their life by allowing them to realize their mistakes and then they choose to correct their mistakes and not forswear to do so and once they are in the clear, return to their bad habits.

A most unfortunate event such as an eight year old child being a victim of a serious car crash that has disfigured their appearance, can have a much better long term outcome in their future as opposed to the absence of that event. Their disfigured face would allow them to go through many years of being laughed at in school and since they don’t have things handed to them like other people, they must fight for them and make some of themselves. This will in turn make that unfortunate child into an adult that is more dedicated, self-reliant and capable of accomplishing a lot more. However, in the same manner that a car crash that disfigured their face can ultimately lead to their future success, it can (although not very likely to happen) also lead to their decline, if that child chooses to give up on their believed to be, ill-fated life. If they give up on life thinking it is hopeless, then it is at that moment that they have just turned it hopeless. The child, as an example of us all, has the choice of which direction to take out of their unfortunate event, and it is up our own judgment to recognize the right paths in life.

So where does this leave us? With the realization of how susceptible human error can be to their rise or decline, and also how random life’s events are. This leaves you nowhere and doesn’t help reason your confusion. Well, that’s simply because for a person to fully understand the consequences of a certain decision he or she must live through it. Although I have experienced many events and of which I still haven’t not be able to comprehend the reason for them to have occurred, I still seek answers that can explain what that each one has geared my life in a different direction and with each one I learn from it, there is still an entire universe of things to be learned. 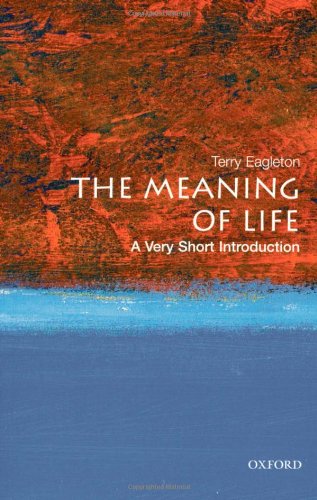 The Meaning of Life: A Very Short Introduction
Buy Now