The Church of Ned Flanders Welcomes You

Are you tired of the same boring sermons every Sunday in your church?

Do you leave church depressed rather than uplifted, as you should?

Do you think that there is more to life and to the afterlife that your church is offering?

Are you thinking of converting to a new religion?

If the answer is yes to any of the questions above then maybe it is time that you made that change.

Join the Church of Flanders today Diddley! bring the joy of God back into your heart.

The Man Behind the New Religion

The son of Beatnick Parents who refused to discipline him, Nedward Flanders was a wild child, until his parents decided phsyciatric help was needed to calm the young ruffian, Dr Foster the phsyciatrist sent him to the University of Minnesota Spankalogical Protocol, which involved eight months of continuous spanking.

As a result of this treatment Ned became the man he is today, unable to express anger of any kind and babbling jibberish when he gets flustered.

He is a highly religious man who would do anything to help anyone who needs it.

Flanders is a widower, having been married to the equally religious Maude. They had two children together; the sheltered and naïve Rod and Todd

Ned is usually honest and sincere in carrying out the Christian doctrines of charity, kindness and compassion. He is frequently shown doing volunteer work, and is rigorously honest and upright, even going so far as to spend an entire day tracking down a Leftorium customer in order to give him the extra change that he had forgotten to hand over.

The Church of Flanders

Or the C.O.F as it is Better known is a church set up to celebrate Neds Religion, The man who is often seen talking to God on Television, and being answered by the Almighty.

He is a true desciple of God and he has many followers.

In 2001 and 2002, The Greenbelt Festival, a British Christian music and arts festival, held a special Ned Flanders Night.

The 2001 event featured a look-alike contest, as well as the tribute band "Ned Zeppelin". It was held in a 500 seat venue that was filled to capacity, and an extra 1500 people were turned away at the door.

Join the C.O.F Today and insure your afterlife now.

In Ned We Trust 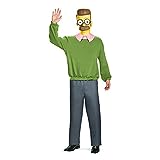