The state of Nevada is a wonderful place to find and explore old ghost towns.The four towns featured in this article, Aurora, Berlin, Bullfrog, and Fort Churchill, are great places to discover what it was like during their 'boom town days'.

Nevada is located in the Western, Mountain West, and Southwestern regions of the United States. It is within the Great Basin area and the Mojave Desert. Most of Nevada is desert and semiarid lands, so the ghost towns are fairly well preserved. The silence of the desert can evoke sounds and connections to the past when one stands still and focuses on what life was like in those early days.

Nevada is the original home of the Paiute, Shoshone, and Washoe Native American tribes. These tribes are a major part of Nevada's culture and history. Mining is also a predominant factor of the history of the state. Most of the ghost towns are remnants of mining camps that once flourished and became towns.

Not much is left of Aurora. After World War II most of the brick buildings were torn down and the bricks used elsewhere. Vandalism over the years has also taken a toll on the town. The cemetery has suffered a lot from vandalism. The tombstone of William E. Carder is lying around the ground in several pieces. Apparently someone wanted to abscond with the tombstone and dropped it when they got in too much of a hurry. Carder was killed in 1864 by a man he should not have ticked off!

Aurora is twenty-two miles southwest of Hawthorne, Nevada, the county seat of Mineral County. The ruins of Aurora are just three miles from the California border, so hop on over and take a look.

Berlin was established in 1897. The remnants of what remains of the little town near the beautiful Toiyabe National Forest tells of a time when it had some creative people - for, the town was built in a U shape, with an opening to the east. It would be interesting to find out just what they expected to come from the east.

In its heyday, the town had only 300 residents and 75 buildings. Now that was a lot of people to crowd into just 75 buildings!

Berlin was not quite as successful in finding gold as some of the other boom towns. With only three miles of tunnels, they found just a paltry amount of gold and silver, less than $1 million. By 1911 most of the residents had abandoned their homes. For a ghost town, it is considered to be in an excellent state of preservation and was added to the National Register of Historic Places in 1971.

Oh, about that quaint little car, it does not work any more, but it sure looks nice sitting there. Makes one ponder on how it really was back in the old days, puttering around the place in a fancy little car, part of the upper class and looking so proud.

Sitting in Nye County are the remnants of what used to be the town's jail. Located at the north end of the Amargosa Desert, Bullfrog is only 4 miles from the ghost town of Beatty, so you can float back and forth between the two. There is not much left of Bullfrog, but, if you won't mind staying in an old jail with no roof on it, hey! go for it!

There is some good news though. It seems as if someone purchased 800 acres of land just outside the limits of what used to be the city. Rumors are that a retreat center may be built on that land. Now there is a thought to ponder! Spook the retreat center people at night when they are all relaxed, then just float on back to the jailhouse in the morning. Sounds like a plan.

Alrighty, then - like forts? Here is one you will love. In Lyon County are the adobe ruins of Fort Churchill. It is a State Historic Park that sits on 4,461 acres. Forts are a lot of fun! You can make up all kinds of games when haunting such a place. Visitors often stop by, so they can be the bad guys and you can be the protector of your fort. Hooeey! Imagine what fun that would be. Oh! Hey! With a fort already set up, you can have snowball fights in the winter!!!

The fort was established in 1861 for the purpose of protecting early settlers, as well as the mail route along the Pony Express. Now there you go! You can be a Pony Express rider in some of your games. During the American Civil War, the fort was a really important depot for Union Army supplies. Now, I doubt very much if there are any supplies left out there, but if you are pretending, then you can whip up any sort of supplies you may need. After the Civil War ended, it was not long before the fort was abandoned.

The fort was named after the Inspector General of the U.S. Army, Sylvester Churchill. The fort has a Visitor Center. There is also a campground along the Carson River in a lovely shaded area of cottonwood trees. Lots of ways here for haunting. Plus a large fort to rest in during the day or play your games. I mean, Dude!, look at the opportunities there!

Well, that is all we have time for today. Maybe we can come back some other time and explore more ghost towns of Nevada. Happy haunting!

Do you like visiting and exploring ghost towns and have you ever been to Nevada to find ghost towns? 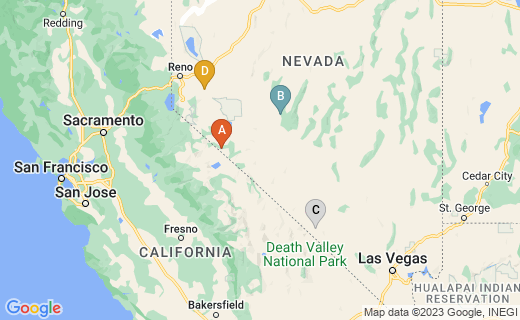 Living in Nevada is really enjoyable and interesting. We often go on day trips around Washoe County and sometimes come upon ruins of old buildings in the middle of nowhere. It makes our minds wander as to what the building once was like and who built it or lived there. Some times we drive through little towns that are not considered ghost towns, for people live and work there - yet, the town has not changed since it was first founded in the 1800s.

Thank you for reading my hub. Your opinions are important to me and let me know your interests. This helps me to offer more of your favorite type articles to read. Your time and interest are very much appreciated. I hope to hear from you in the comments section below.