Ghost towns of the desert ~

The state of Nevada is a wonderful place to find and explore old ghost towns. Nevada is located in the Western, Mountain West, and Southwestern regions of the United States. It is within the Great Basin area and the Mojave Desert.

Ghost towns of Nevada linger in the dryness of the desert. The past is stubborn and does not seem to be able to let go. These towns are a constant reminder of the way life was so many years ago. For those who love to trek through the desert in search of such places, Nevada is a good destination to aim for.

The Silver State has a rich heritage and historical background that comes forth from these old towns. The harsh, yet rich, environment that shaped the culture of the state was both welcomed and cursed by miners and early settlers.

The Comstock Lode was the first major discovery of silver in the United States. It happened in 1859 and when made public it brought a rush of prospectors who hoped to get rich. Many of them did and their great fortunes generated a large role in the growth of Nevada.

The boom towns that sprung up during the gold rush days and the silver mining made a lot of people rich and left a lot of others destitute. When the mining dwindled due to lack of technology and awareness of the health dangers in the mines, many towns were abandoned and left to the desert winds.

Long before the Shoshone Indians came to this area of Nevada where Belmont now lies, prehistoric peoples lived here. The Shoshone visited the area for their jackrabbit drives and ceremonial gatherings.

The discovery of silver ore in 1865 attracted miners and the lovely town of Belmont was established. It was a great location with an abundance of wood and water sources and lots of shade trees for homes to nestle under.

It was a rather lively town when the English and Irish feuds flared up and that happened quite often. So, any ghosts that may still be there will probably be happy to have you come and join sides with them. I mean party, party, party -- if you like that kind of life -- I guess I should say, afterlife.

Belmont in Nye County, is listed in the Nevada State Historic Preservation Office, which means the town is quite important and therefore your status as a ghostly resident will be upgraded -- that ought to lift your spirits.

Cobre is a little ghost town in Elko County, Nevada. Just a handcar shed and an engine house is all that is left standing in what was once a railroad interchange point. You can spiff either building up a bit, or just enjoy the rustic atmosphere as is. The choice is yours -- for you will be the only one there.

The town, or what there is left of it, is located at the former interchange point between the Southern Pacific Railroad and the Nevada Northern Railway. When construction of the Nevada Northern began in 1905 that is when the town was built. No trains go through the town now, nothing does except the desert winds and maybe a coyote or jackrabbit occasionally.

Cobre is the Spanish word for copper. The NNR was sent there to serve the copper mines and smelter near Ely, Nevada. By 1910 Cobre was a bustling town for all of 60 residents. When the automobile came along, the railroads abandoned the station in Cobre, so people started leaving and moved on to Ely or elsewhere.

Seems like Cobre was never really crowded, but not everyone needs crowds around them all the time. Oh, I know. I understand perfectly -- life is often a crap-shoot and you need time alone for awhile to reflect on what was. So, reaching the stage where you just want to get away by yourself to contemplate, and relax can be a wonderful experience. Enjoy your peace and quiet for awhile away from all the hysteria of loud haunting.

Gold Point, Nevada is in Esmeralda County. (Esmeralda...I think she was a friend of the Hunchback) Established in 1861, Esmeralda is one of Nevada's original counties.

Sometime in the 1880s ranchers and miners settled the town of Gold Point. The miners established a small camp just a short distance from the town. The camp was called Lime Point due to an outcropping of limestone at the site.

New discoveries of gold and silver in nearby Tonopah and Goldfield enticed a lot of miners to the area and many of them revived the Lime Point camp. That showed no profit for them since little water was available there and milling had to be done 250 miles north at Unionville. Mining did not produce enough silver ore and the shipping costs did not make it profitable. So, the camp was abandoned.

Off and on over the years, mining was attempted again and again, but just did not pay off for anyone -- not until a miner in 1927 stumbled upon something even better. J.W. Dunfee had found gold! In a few short years, more gold than silver came up from the mine. The town then became known as Gold Point and was a very successful little town. World War II put an end to the mining days for many and Gold Point eventually became a ghost town.

There are still some fine looking buildings there in fairly good shape, with about 50 buildings still standing, including the post office that is now a museum. The Post Office Museum is open on most weekends and for large parties. Memorial Day Weekend is the annual Chili Cook-Off that provides lots of events, food, and fun. For a few days of the year, the population soars to 400 -- so, lots of activity going on then. RV hookups, western re-enactment and gunfights in the plaza, you might even enter the chili cook-off and win some prizes.

There is a local legend that the town is frequented by the headless ghost of the last woman to die in Gold Point. This accident occurred when the mine was being taken apart and a support beam collapsed and fell on the poor lady. More than likely, she will be happy to welcome you to her town. That should give you a head start! Atmosphere and location is here at Gold Point.

If you had the chance and finances to buy a ghost town, would you? 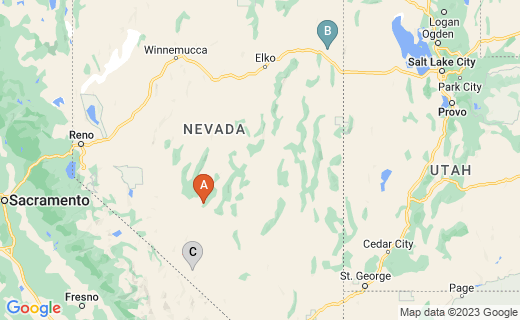 Thank you for reading my hub. Your opinions are important to me and let me know your interests. This helps me to offer more of your favorite type articles to read. Your time and interest are very much appreciated. I hope to hear from you in the comments section below.

Blessings and may you always walk in peace and harmony.