Noah and His Ark

When man began to multiply on earth, they became wicked. There was so much corruption, immorality, and violence that God was grieved.

God was sorry He created man. He wished He had never created man and all living things on earth.

But there was one man named Noah who was righteous. He and his family walked with God, and they found favor in the eyes of God. Noah had three sons: Shem, Ham, and Japheth.

One day, God said to Noah, “Man has become so wicked. I am going to remove them from the earth. I am going to bring flood on earth to destroy every creature that has the breath of life in it. Everything on earth will perish. But I will spare you and your family. I want you to build a huge boat. I will tell you how to build it. Then you fill it with two of every type of animals and birds. Fill it with food to keep you safe and alive while the flood is going on.”

Noah did what God asked him to do and God gave him the plans to build the boat which was called an ark.

Noah and his family started to build the ark according to God’s instructions. Their neighbors laughed at them and thought they were out of their minds. They called them all kinds of names from crazy to wacky to looney for building such a huge boat when there had been no rain for a long, long time, and there was no sign that a rain would ever come.

The insults and the mockery did not stop Noah and his family to obey God’s command. Noah even ventured to tell the people to repent and to turn away from their wickedness but they did not listen and continued with their corrupt ways. When he told them about God’s plan to destroy man because of their wickedness, they laughed at him even more.

After the ark was finished, God said to Noah, “Go into the ark, you and your whole family. Take with you two of every kind of animal, male and female, and two of every kind of bird, to keep their various kind alive throughout the earth. Seven days from now I will send rain on the earth for forty days and forty nights, and I will wipe from the earth every living creature I have made.

So Noah and his wife, their sons, and their sons’ wives entered the ark to escape the waters of the flood. Pairs of birds and all creatures that move along the ground, male and female, came to Noah and entered the ark as God has commanded. Then the Lord shut them in.

After seven days, rain fell on the earth and it lasted forty days and forty nights. The water rose and covered the mountains. The ark floated on the water. Every living thing on earth perished – only Noah and those with him inside the ark were left.

After forty days, the rain stopped but water still flooded the earth. God had not forgotten Noah. He sent a wind over the earth and the waters started to recede. At the end of a hundred and fifty days, the water had gone down and the ark came to rest at the mountains of Ararat.

Noah decided to check if the earth was dry so he sent a raven out but the raven did not come back inside the ark. It just kept flying back and forth waiting for the water to dry up. So Noah sent a dove out but the dove could not find a place to perch because water was still all over the earth. The dove came back to the ark.

Noah waited seven more days before he sent the dove out again. When the dove returned in the evening, it had a freshly plucked olive leaf in his beak. Noah knew that the water had receded from the earth and plants are growing again. After another seven days, he sent the dove again and this time, the dove did not return.

Noah removed the covering of the ark and saw that the surface of the earth was dry.

Then God said to him, “Come out of the ark, you and your wife, your sons and their wives. Bring out every living creature that is with you – so they can multiply on the earth and be fruitful and increase in number.”

So Noah and his family, including all the living creatures with him came out of the ark. 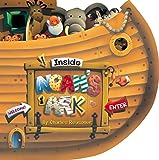 Noah built an altar and sacrificed a burnt offering to God. The Lord was pleased with Noah’s offering and said, “Never again will I curse the ground because of man, even though every inclination of his heart is evil from childhood. And never again will I destroy all living creatures, as I have done.”

Then God blessed Noah and his sons, and said to them, “Be fruitful and increase in number and fill the earth. Everything that lives and moves will be food for you. Just as I gave you the green plants, I now give you everything.

“I now establish my covenant with you and with your descendants and with every living creature that came out of the ark with you - never again will all life be cut off by the waters of a flood, never again will there be flood to destroy the earth.

“This is the sign of the covenant -- I have set my rainbow in the clouds. Whenever I bring clouds over the earth and the rainbow appears, I will remember my everlasting covenant between me and you and all living creatures. Never again will the waters become a flood to destroy all life.”