Nostradamus and the Prophecy of Orval

Listen here to the voice of Nostradamus himself, in an amazing EVP, about the lost treasures (and secrets) or Orval:

In 1840 the French magazine L'Oracle published a story told by the baron of Manonville in his diary. During the Revolution, in May 1793, he and some other royalists were in the abbey of Orval, that belonged to the Austrian Netherlands and was situated on the border with France. There was a war between Austria and France, and the republican troops of general Loison had sacked the abbey, but where chased by the Austrian army.

An old monk showed the baron a booklet, written in 16th century French, which for centuries had gathered dust in the archives of the abbey. The booklet was titled Sure Prophecies revealed by the Lord to a Solitary for the Consolation of God's children and was printed in 1544, in Luxembourg. The baron of Manonville copied the prophecies in his diary, because they seemed to predict a restoration of the monarchy in France. Later on, the same prophecy was read aloud by the last abbot of Orval at a party in the house of the Austrian gouvernor baron von Bender, in Luxembourg. This time several French émigrés, such as the comte of Montureux-Ficquelmont, took notes of it.

Before general Loison some time later set the abbey of Orval on fire, he sent all the manuscripts that were found there to Paris. They were examined by François de Metz and he discovered in a chest full of books a copy, made in 1793 by the last abbot of Orval, of a booklet titled Book of Phrophecies Composed by Philippe-Dieudonné-Noël Olivarius, doctor in medicine, surgeon and astrologer. On the last page was written: "Finis, MDXLII". This prophecy dated, in other words, from 1542.

Scholars noticed quickly that there were a lot of similarities between both prophecies and the quatrains of Nostradamus, who possibly stayed between 1542 and 1544 in Orval. Was the greatest prophet of them all the Solitary of Orval, also known as Olivarius, doctor in medicine, surgeon and astrologer? This could well be the case. Others however have claimed that the booklets which showed up probably were printed in 1820 and 1839. The Prophecy of Orval, in other words, was made up by the royalists for politic reasons and were attributed falsely to Nostradamus by the Century scholars Bareste and Torné-Chavigny.

Before embarking on his career as a prohet, Nostradamus is said to have been shown an ancient and arcane book, on which he based all his subsequent work. This book was given to him in Orval. Is it possible Nostradamus speaks of this book in the letter to his son Ceasar, that is preface to his prophecies, when he mentions the "volumes which had laid hidden for many ages" that he threw in the fire? According to professor Rudy Cambier, Nostradamus had stolen these old volumes which were no prophecies at all, but some sort of a Templar legacy.

Was the fake Prophecy of Orval then inspired by a true old manuscript? It's possible...

During the year 1839 the Prophecy of Orval emerged in some very catholic periodicals, but it wasn't until the following year in a more or less satisfactory manner published in the Paris Oracle of monsieur Dujardin. The writer of the article, a mister O'Mahony, gives a number of letters which he obtained from different French priests and lay gentlemen, "proving" the existence of the Prophecy before the first French Revolution.The curé (parish priest) of Mande, a town near the abbey of Orval, said that the Prophecy of Orval was already well known in 1816, at Bar-le-Duc, by a very large number of persons, some of whom gave a copy of it to the Very Rev. Canon De-, which he communicated to Monsieur De L- who wrote upon this subject to the parish priest of Mande. After some considerable delay, this ecclesiastic answered to the date 29th August, 1833, that he in his parish also had "a saintly person", who had full faith in these predictions. He did not censure her, but he did not share her convictions either. Being pressed by the Monsieur De L-, on the 4th of April, 1835, the curé of Mande wrote a second letter. He had gathered more and better information, had visited the locality and examined divers sources, and he concluded:

"It is a certain fact, which excludes every doubt, that the prophecies of the Solitary D'Orval, such as they are known to you, were written in the abbey D'Orval before the French Revolution, namely, before the year 1790. At that time they were known and read in that abbey. The Baron, Sir Manonville, a personage of sound sense and of religion, attests to having read them at that time, without attaching to them the importance which he felt obliged to give them afterwards. French emigrated ladies knew these prophecies during their exile and many ecclesiastics, among whom the curé of Sedan, had without doubt knowledge of them before the Revolution of 1830. It is therefore a well-established fact that this prophecy (...) is proved to have had its origin at an epoch anterior to the events which are therein specified in a manner so precise and clear as to appear to have been written after their occurrence."

Monsieur De L- now wrote to the curé of Sedan, who stated that he often heard persons speaking of the prophecies during his exile on the account of the Revolution of 1792. But it was only since the Restoration of 1815 that the text was communicated to him and "it contains all that relates to Napoleon, the return of the Bourbons, their departure, and the rest, etc., till the coming of Antichrist. Orval, through which I passed a few days before the Revolution in the year 1792, is no farther than six leagues (about eighteen miles) from here. I had occasion to return thither and examine its ruins..."

"Here is no less than the original text of the Prediction," Monsieur O' Mahony concluded his article, "copied in the year 1823, from a book printed in Luxemburg in 1544." 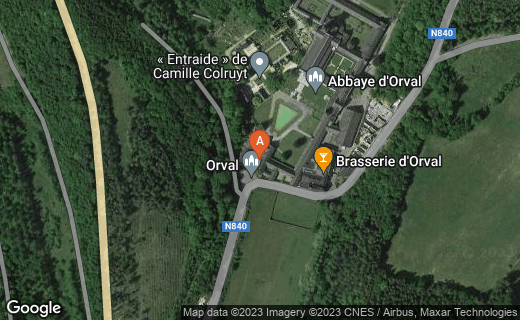 Full Text of the Prophecy of Orval