Padre Pio or Francesco Forgione was born on May 25 1887 in Pietrelcina Italy. Throughout his years on earth he was a priest, friar, mystic and stigmatist.

After his death he was eventually made a Saint in 1997.

But what was it about this remarkable man that made him so special?

In 1917 a General Luigi Cadorna, Chief of the Italian General Staff, was in total despair after his armies defeat by the Germans in Slovenia.

As he was sitting in his tent, he held a gun to his head, contemplating suicide. Suddenly a monk appeared before him and yelled 'Don't be stupid'! Then the monk completely vanished!

The general was stunned, but put it down to exhaustion. But many years later after the first world war, the general paid a visit to the church of San Giovanni Rotondo in Central Italy.

To his total astonishment, he came face to face with a monk who he recognized. It was the monk who had appeared in his tent.

Even more amazing was the fact that the monk smiled and said 'You had a lucky escape my friend'!

The general was stunned! He knew that the monk hadn't really been in his tent in the flesh so to speak. So how on earth...?

The monk was Padre Pio. He was a humble peasant priest who became famous for working miracles, being clairvoyant and carrying stigmata.

And what made the story of the general so remarkable was the fact that for the enitre duration of the war, Padre Pio had never left his friary.

His story is an amazing tale of faith poverty and prayer. He was born in the village of pietrecina near benevento, in 1887.

He was the son of a poor farmer, and at the age of 17 he entered a Capuchin monastery. For 11 years he went quietly about his duties and studied diligently.

Then something happened. On September 20 1915, he complained of pains in his feet, right side, and hands.

Doctors could find nothing wrong with him, but on September 20 1918 exactly three years to the day after feeling ill he collapsed in agony at the altar of the church at Foggia.

His fellow monks found him unconscious and bleeding from his hands feet and side. And to their astonishment realized that he was bleeding the same wounds as Jesus on the Cross. 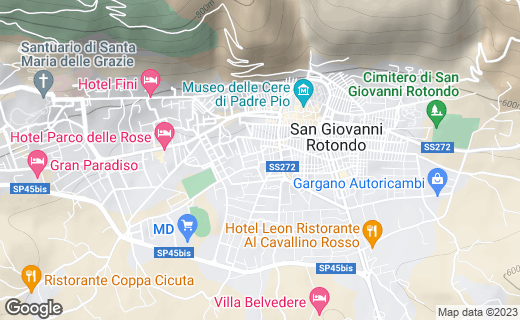 After being examined by many doctors, Padre Pio could not explain what had happened. In fact he was as puzzled as the doctors.

At this time it was regarded as a miracle, and of course many still believe it today. Modern Doctors however believe that auto suggestion is involved. This being that the person in question is so religious that they somehow bring on the stigmata themselves.

Whatever the cause, Padre Pio's name became famous for his miracles and he traveled throughout the Catholic world giving kind words healing and gentle confession.

The wonderful thing about this kind man is that he never tried to capitalize on the strange phenomenon of his stigmata. In fact he did the total opposite. He would keep away from crowds, Avoiding the public, and if there was any hint of notoriety he would disappear until it died down.

In fact when he went out he would always wear gloves to hide the stigmata.

But word soon got out and to his surprise money started pouring in for him and in 1956 a hospital was opened at Foggia, costing 1 million pounds. Paid for by all the donations.

Padre Pio Seen In Two Places At Once.

Padre Pio's home village of Pietrelcina also began to prosper because pilgrims began to flock to his birth place.

He was suspended twice from his duties by the Vatican because his fame was becoming an embarrassment to the Church. Which is kind of ironic.

There was so much money sent to him that the Church vowed that all the money would be willed to the Holy See.

Thinking that would slow down the fame, they left him alone. But they didn't allow for the fact that his clairvoyance and other powers were becoming stronger.

For an example of Padre Pio's clairvoyance, we have to look at what happened on January 20 1936.

Three men visiting the friary were soon approached by Padre Pio. The Padre said 'Please pray with me for a soul who is soon to appear before the tribunal of God'.

The men were puzzled but obeyed. They were then told by the priest that they had in fact been praying for King George V of England, who had died at the exact time of their prayer!

Another tale of padre Pio shows that once again he appeared to be in two places at once.

In 1942, the Archbishop of Montevideo Uruguay, was woken up late at night by a Capuchin monk. Who told him to quickly go to the bedside of Damiani.

When the Archbishop got there, Damiani was dead. But by the bed was a piece of paper on which was written, 'Padre Pio was here'.

It wasn't until a few years later that the archbishop actually met Padre Pio. And he recognized him straight away! It was the same monk who had appeared to him many years before, then disappeared! And of course Padre Pio once again had not even left the monastery.

'Pray Hope and don't Worry. Worry is useless. God is merciful and will hear your Prayer'.

'Don't allow any sadness to dwell in your soul, for sadness prevents the Holy Spirit from acting freely'

'If you should fail, be humble, make a resolution to be submissive to God's will and then get up and carry on.'

'Remember that he who flees from temptation, wins!'

Padre Pio was exhumed in 2008 and was found to be partially incorruptible. In plain English this means that his body was still intact. Evidently part of his skull and body were in bad condition but the rest was still as it was in life.

The face that you see in the photo of him laying in state, is in fact a recent photo of him in an Incorruptible state. The face has been added to with silicone wax to make a mask.

Of course as Padre Pio only died in 1968 he was buried after being preserved in formaldehyde and sealed in an airtight tomb.

Incorruptible? Probably not. Only those in the past who are preserved without any help at all can be called by that word.

But that doesn't matter. This man has thousands upon thousands of people who revere and worship him. They believe in his miracles and his clairvoyance. He was a remarkable man.

Do you believe Padre Pio should have become a Saint?