I lived in North Carolina almost all of my life and I know there is some really weird stuff going on there.
But I really didn't know just how weird till I started poking around.

I have been interested in paranormal events since I was a kid, as some of my UFO Hubs will attest to, but you always miss what is in your own backyard...so to speak.
Well in my case, literally.
NC has sea monsters, Bigfoot sightings, werewolf sightings and other paranormal creatures.
Heck, we may have even had El Chupacabra before El Chupacabra was cool!

The Vampire Beast of Bladenboro

The Vampire Beast of Bladenboro

Yes for two weeks in December of 1953 and again in January of 1954, North Carolina had it's own version of "El Chupacabra" and it's own version of the legendary "unexplained animal attacks bodies drained of blood" story
On December 29th, 1953, a farmer reported that "something" attacked one of his dogs and dragged it into the bush.
Well we have mountain lions in NC, so that's not too spectacular.
What makes it noteworthy, is that when the body of the dog was found, it was reportedly completely drained of blood.
Mountain Lions don't do that do they?
And this wasn't the only incident. Several other attacks took place.
The descriptions from witnesses sounded panther-like..."Like a bear or a panther"..."three feet long, twenty inches high, with a long tail and a cat's face."..."large, cat-like creature"..."round face, shiny eyes and large teeth."
In 2008, the History Channel television series Monster Quest got involved and their research indicated that the attacker may have been a cougar.
No, not a middle-aged woman, a REAL cougar.
But the attacks happened in the 1950s so everything is fine now right?
Not so fast.
In September 2007, sixty goats were found killed and drained of blood in Lexington NC.
Yes sixty!
Thirty miles from Lexington in Greensboro, four of Guilford County Commissioner Billy Yow's goats were killed and their necks were ripped open, their bodies drained of blood, and they were left uneaten with no other marks.
In October 2007, In Bolivian NC, a three year old Pit Bull was found gutted.
Four days after that, another Pit was found covered in blood, with pieces missing.
All in all, ten dogs were found torn to pieces in Brunswick County, during a two-week period.
The tracks that were found were four and a half inches in diameter..very similar to the tracks found in Bladenboro in the 50s.
Local animal services have never determined what had attacked the animals.

North Carolina even has it's own version of "Nessie".
Lake Norman is a man made body of fresh water located entirely within North Carolina.
It was created between 1959 and 1964.
Kinda hard for an ancient sea creature to get in there huh?
But over 55 people have reported seeing something strange in the waters of Lake Norman.
"Normie" as the locals call it, has been described as anything from a giant crocodile to the classic sea serpent.
The most common description is fish like, a slender body, thick whisker like appendages, flippers and a ragged looking dorsal fin.
A giant catfish?
It's been suggested that the creature is actually a Gar, an American Freshwater Eel, a snakehead fish, an alligator or even a freshwater jellyfish.
(In the 1990s a freshwater jellyfish was found in Lake Norman by scientists, that shouldn't have been there)
My personal favorite explanation?
Lake Norman is used by the McGuire Nuclear Power Station to cool the steam that drives their turbines.
Yes...Nuclear Power Station.
Maybe some radioactive materials slipped into Lake Norman, hit a catfish and...BOOM!
Catzilla!

I know South Carolina is not North Carolina.
But the famed Lizard Man of Scape Ore Swamp in South Carolina seems to have crossed over and may have been sighted in NC.
This lovely humanoid cryptid is described as seven feet tall, with green scaly skin and glowing red eyes.
Maybe the creature crosses the border between NC and SC. 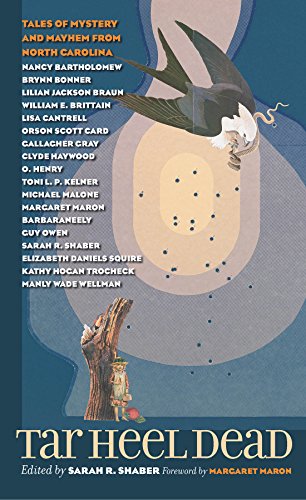 And we have had Bigfoot sightings in North Carolina as well.
As recently as 2008, there was a Bigfoot sighting in McDowell County.
(I always wondered why they aren't called "Bigfeet" they have two of them don't they?)

And now it looks like Bigfoot is at it again.
On Saturday, June 5, 2010 Tim Peeler of Casar claims that he saw Bigfoot on his property.
Then the next day on Sunday, June 6, Elbert Lowman of the George Hildebrand community found a large footprint that measured 8 inches across from toe to toe and 15.25 inches long.

The Demon Dog of Valle Crucis

North Carolina may have it's very own werewolf (or maybe even skinwalker).
In the little mountain town of Valle Crucis, high in the Appalachian Mountains of North Carolina, there's an old stone church, located off Highway 194.
And near the cemetery of that church, there have been reports of a wolf-like creature, as tall as a man, with long yellow razor sharp teeth, black fur and glowing red eyes like coals.
I checked out the website for Valle Crucis (yes, little mountain towns have websites) and saw no mention of a were-beast.
Of course what would they say?
"Valle Crucis...Come for the atmosphere, stay for the slaughter"?
Even the Wikipedia entry says nothing about the "Vale of the Cross" monster.
I'd think a werewolf that can hit sixty miles per hour on a straightaway chasing a car (see:http://www.northcarolinaghosts.com/mountains/demon-dog-valle-crucis.php) would be noteworthy though.

Which is your favorite Paranormal tales from North Carolina?