If you were studying about the spread of Christianity, the missionary journeys and writings of Paul the Apostle would comprise most of the major stepping stones. In penning many of the Epistles, he often mentioned – by name - many of his fellow laborers who worked with him or substantially supported his efforts to carry the gospel message to the known world at the time. Five of those names are: Barnabas, Luke, Timothy, Titus and Clement.

Luke used an expression, when speaking of those who actively ministered with the Apostle.

He called them "Paul's company".

Antioch was founded in 300 B.C. By Seleucus I Nicator, King of Syria, a general in the army of Alexander the Great and one of his three successors. It was once a thriving center of commerce; a chief city, the capital of Syria, and in fact, the third largest city on the Roman Empire. It was racillay diverse, so it is not surprisingly, the disciples of Christ were comprised of both Jewish and Gentile converts. Today this city is known as Antakya, in modern-day Turkey.

Barnabas was Paul's champion. While others may have doubted the sincerity of the Apostle's conversion, Barnabas sought Paul out. When he found him in Tarsus, he encouraged him to become a fellow laborer and convinced others that he could be an invaluable help with the missionary efforts.

“The disciples were called Christians* first in Antioch.” (Acts 11: 26) Barnabas and Paul traveled together to Antioch in Syria to strengthen the community of believers already there. The zealous teamwork of these two men proved very successful. Though the Church began, A.D. 33, in Jerusalem, from Antioch the “good news” would spread to all the major cities in the Roman Empire, including Rome.

Before becoming a Christian, Barnabas was a Jew; a Levite from the island of Cyprus, whose name was Joseph (Joses). He was called “son of consolation (or son of encouragement)” by the disciples because he had a gift for motivating those who were discouraged to remain focused, steadfast, and faithful. So committed was he that he sold his property and donated the proceeds to help the poor and needy. His act of generosity spurred others on to perform similar good works.

* Greek: Christianoi: “devotees of the Anointed One.

The name Luke or Lucas means “light-giving”; which is very appropriate since he authored a two-part work – the Gospel of Luke and the Acts of the Apostles – both written to shed light on the life of Christ and the establishment of His Church.

His first appearance, historically, is in Troas. Details about his conversion are unknown. Details regarding his faithfulness are made plain in the New Testament scriptures. Luke traveled with the Apostle during his second (from Troas to Philippi), third (from Philippi to Jerusalem) and final (from Jerusalem to Rome) missionary journeys. In addition, during one of Paul's imprisonments, Luke dutifully remained close by. Luke was an educated man; a writer, historian, and physician by profession. Paul speaks of him with great affection as the “beloved physician”. 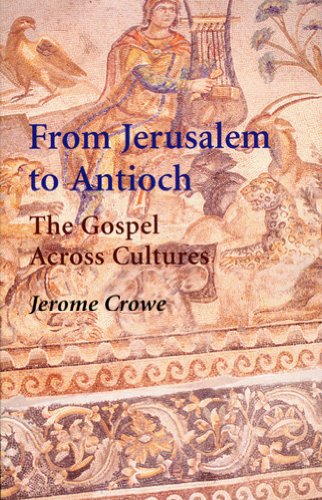 From Jerusalem to Antioch: The Gospel Across Cultures
Buy Now

Titus was a Grecian convert. Luke does not mention him by name in the Book of Acts, but Paul confirms him as a “partner and fellow helper”. Titus accompanied Paul and Barnabas on a trip to Jerusalem. Unable to go for himself, Paul sent Titus to work with the congregation in Corinth, and then bring back news about their well-being and spiritual health. He brought back a good report and refreshed the weary Apostle's spirit. Several years later, Paul would leave Titus behind in Crete to build up the Church there.

The relationship between Paul and Titus was much like his association with Timothy. The two letters to Timothy and the letter to Titus have been grouped together and referred to as Pastoral Epistles. Both men were directed to ordain elders to oversee the flock of God, warned about false teachers, told to maintain good works, the purity of the Church, and especially ensure their own personal morality and blameless reputation as godly men.

The last mention of Titus is by Paul in a letter to Timothy (whom he had left in Ephesus) that he was headed to Dalmatia (Roman district in A.D. 12; today a region of Croatia, Yugoslavia).

Timothy's mother (Eunice) and grandmother (Lois) were devout Jews, who taught him the Jewish scriptures from a child. All three of them were converted to Christianity. This young man traveled with Paul or to places where he was sent by Paul – such as, Berea, Macedonia, Thessalonica, Corinth, and Philippi – to evangelize, preach, teach, comfort and assure the believers to press on and not falter. Paul was retracing his steps and revisiting Lystra in Lycaonia, when he and Timothy crossed paths. The first time he was in this small city was with Barnabas. On this second trip, Timothy joined Paul's company.

“We have the same mind. He does not seek his own. He has served with me in the gospel and has the same boldness to as I do to defend the faith. His love and care for all the churches is genuine.”

While in prison in Rome, awaiting execution, the Apostle wrote to Timothy instructing him to take heart, persevere and continue the Lord's work without him.

Limited biographical data for the first four men is contained in the New Testament. But the fifth person, Clement? Many believe that he is the same person referred to as Clement of Rome, in post-apostolic writings. While others think that to link the individual mentioned only in Philippians 4: 3, to a person by the same name associated only with the city of Rome, would result in a case of mistaken identity.

To debate this man's identity is fruitless (my opinion). He existed! He worked with the Apostle at Philippi; was esteemed highly by him and counted as a faithful follower. Also, his name means “kind” or “merciful”.

Paul knew him. Paul names him. That's that!

My Son in the Faith

Paul developed a special relationship with one of the five named. They were so close that he called him his “son in the faith”. Who was it?

Paul had a disagreement with one of his companions. The contention was so sharp they parted ways, for a while, and later reconciled their differences. Who was it?