In this article we will look at the first of these seven letters written to the congregation at Ephesus (Chapter 1, verses 1-11).

We will begin with an overview, then the actual verses taken from the Book (with my commentary added), concluded by an historical summary about the city of Ephesus.

May you be exhorted by the grieving words Jesus imparts to the Ephesian congregation, "the insincere church".

The Letter to Ephesus

This message to the Ephesians is a grieving complaint that the congregation had left its "first love" and thus stopped loving Jesus sincerely.

2:1 "To the angel of the church of Ephesus write, 'These things says He who holds the seven stars in His right hand, who walks in the midst of the seven golden lampstands:"

Two things in this opening address are consistent in all seven letters.

(1) The letter is addressed to "the angel of the church"

The "angel of the church", as we discussed earlier, is the pastor of the church (see notes-Rev.1:20). These letters are addressed to the one responsible for sharing the message with the members of the congregation.

The imagery Jesus draws from in these letters is consistent with the way He revealed Himself to John (in Chapter One) because it's part of that event. Whereas, John, as instructed, described for us in the previous Chapter what he had seen in beholding Christ, he now writes what Jesus has to say concerning the things which are; namely, the Church. We will see in these letters, Jesus using components of His image to describe Himself to the particular congregation in order to speak to the nature of that church's condition.

"He who holds the seven stars in His right hand..."

This seems intended as a reminder to Ephesus that He (Jesus) is the One Who upholds and empowers the pastor, and therefore He to whom the church is subject in all things as the Head of the church (Col. 1:18).

"...who walks in the midst of the seven golden lampstands"

This continues the admonition by reminding Ephesus that He does move about the church, watchful to guard against internal and external evils, and mindful to rightly preserve its spiritual well-being.

2:2-4 "I know your works, your labor, your patience, and that you cannot bear those who are evil. And you have tested those who say they are apostles and are not, and have found them liars; and you have persevered and have patience, and have labored for My name's sake and have not become weary. Nevertheless I have this against you, that you have left your first love.

It's not a good sign when Jesus follows praise by rebuke.

But it is worth noting, as we will see in these letters that Jesus ascribes His knowledge of the congregation's works, good or bad, but always acknowledges the positive before the negative.

On one hand, the works of the Ephesians were great. According to Jesus, they labored hard to serve the church, persevered in their duties with patience, weeded out the unrepentant, and guarded themselves against false teachers and doctrines. Moreover, they did it gladly for His name's sake without growing weary.

On the other hand, however, they were short of love, and Jesus rebukes them for it. Listen to His complaint:

"Nevertheless I have this against you, that you have left your first love."

The love in question here is the "early love". That first enthusiastically warm and affectionate love following a new life in Christ, where self is denied, all that displeases God is gladly abandoned, and fellowship one with another is joyfully embraced. It is this love, the love kindled in the beginning when we first accept Christ as Savior, from which the Ephesians had strayed. As one commentator puts it, because they lacked sincerity, "they were going through the motions without emotion".

Here's my guess how the delinquency might have played out in the church:

Services were attended out of obligation or force of habit rather than a passionate desire to worship God as it was in the beginning; and fellowship, where earlier hearts for one another were tender, became argumentative and divisive.

2:5 "Remember therefore from where you have fallen; repent and do the first works, or else I will come to you quickly and remove your lampstand from its place-- unless you repent.

This is a strong admonition, but at the same time, I see it as a very tender appeal by Jesus because of one word: "REMEMBER..."

Memory is a powerful and driving force. Otherwise, we wouldn't return to the ocean for a walk on the beach, to a restaurant for our favorite food, or to an old photo album for the umpteenth time. Memorable recollections of pleasant experiences always cause us to return to those things that we've enjoyed in the past.

That's why I believe Jesus uses the word. Not just to command them, but to arouse in them into a fond memory of their early love with Him. So they would correct their condition by their own volition and not require Him to chasten them.

Okay, but we can't neglect the ultimatum: Ephesus must repent and return to their first love quickly or else they would be chastened by having their "lampstand" removed from its place. What does that mean?

Keep in mind that the Church is symbolized as a lampstand because our primary function to Christ is that of a light-bearer to uphold light (Matt.5:14-15).

When we, the Church, uphold Jesus Christ (Who is light; John 8:12), we serve Him because we illuminate Him to the world. On the other hand, when a wrong attitude quenches the work of the Holy Spirit, and we no longer enlighten hearts with the love and glory of God, our usefulness to Christ ceases; a concern, incidentally, that generally plagued even the Apostle Paul (I Cor.9:27). Much the same way you and I would remove a lamp that becomes faulty because it's no longer useful, Jesus threatens to remove Ephesus. Not that it meant a loss of salvation; the congregation was at risk of losing any future opportunity to be of service to Him.

2:6 "But this you have, that you hate the deeds of the Nicolaitans, which I also hate.

It's generally accepted that the Nicolaitans were an early heretical sect that arose during the apostolic period of the church, and in some cases influenced it (much as they did Pergamos and Thyatira).

Although their origin is somewhat of a mystery, their practices were most likely pagan in nature and crowded with idols and idolatrous worship. It's also possible that this sect embraced a system of ideas involving tyrannical lordship over the church; that is, they pretended to have apostolic authority in order to rule over the affairs of new Christians in the early Church. This is drawn by some commentators from the meaning of the name nicolaitans, which in Greek means, "to overcome the people."

Whoever the Nicolaitans were, though, Jesus found their deeds abhorring, and further commended the Ephesians for keeping them out of the congregation.

2:7 "He who has an ear, let him hear what the Spirit says to the churches. To him who overcomes I will give to eat from the tree of life, which is in the midst of the Paradise of God."

It should be pointed out that each of these letters to the Church concludes in the same way.

(2) A promised blessing to "him who overcomes"

Before His departure, Jesus said of the Holy Spirit, "He will guide you into all truth" and "He will tell you things to come" (John 16:13). We must "hear" (not just listen, but also hear with the heart to be in agreement with God) when the Spirit speaks. For the Holy Spirit speaks truthfully to us about both, admonition and promise. We take the phrase "him who overcomes" to signify the ones, who by faith, overcome the world and find victory in the saving grace of Jesus Christ (1 John 5:5).

"To him who overcomes I will give to eat from the tree of life, which is in the midst of the paradise of God."

This speaks of the immortality of heaven that awaits every believer. For it's inside New Jerusalem (the eternal city of the saints) that the tree of life will yield its fruit throughout eternity (Rev.22:2).

The church at Ephesus began about 50 AD by what is believed to have been the efforts of Priscilla and Aquila (Acts 18:18). In about 52 AD Paul established a ministry there that lasted nearly 3 years, followed by Timothy, and eventually (at least according to some traditions) John himself, following his exile on Patmos. Ephesus was the largest city in the province of Asia, having had perhaps a population of 300,000 people. It was also significant for its religion, including the Temple of Diana (ranked as one of the Seven Wonders of the World. Sometime before the first millennium, however, the city lost importance, decreased in population, and saw many of her sculptured stones (falling to ruins) carted off to Italy. In 1308 the Turks took possession of what little remained of the city and either deported or murdered its remaining inhabitants. Today, as a result perpetual river flooding, the ruins of the city lie in a swamp, and only the small nearby Turkish town of Ayasaluk represents her. 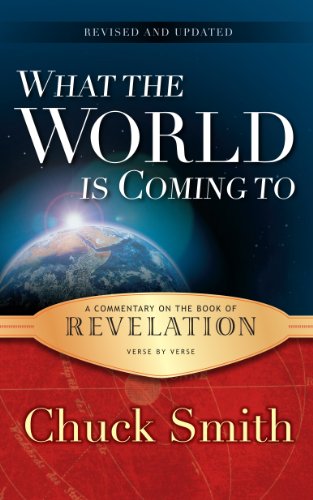 Revelation Commentary: What the World is Coming To
Buy Now