Sage has been celebrating the Wheel of the Year for 25+ years. Being a holiday junkie, she just can't get enough of the sabbats!

I will admit something here and now-- I totally have a weakness for pie. I really do. Cake or cookies I have to be in the mood for, but I'm just a sucker for a good pie. Especially in the Autumn season-- there's just something so homey about it.

I started making miniature pies (also known as cup pies, thanks Pushing Daisies, a show that died an untimely death) for a few reasons. The first is because of us cutting back on simple carbohydrates and sugars. Since I don't make baked goods weekly like I used to, everyone wants their favorite when I do break out the rolling pin. My daughter wants maple pecan, my little guy wants pumpkin, etc. And as for my hubby, if he's going to spend his treat allowance on pie, he absolutely must have apple. Instead of making 3 or 4 whole pies, I just make a variety of miniature pies.

The second reason I like the mini pies is that everyone gets their serving size and that's it (no giant slices, no coming back for more). I can freeze the remainders individually, which always comes in handy if I don't get to baking on a holiday or if unexpected company shows up.

Here is my recipe for mini apple pies, which look so cute on the Autumn holiday tables.

These are Made in Muffin Tins 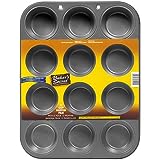