If you have children, what do you want them to believe -- Or how do you teach them to make their own belief decisions?

Santa Claus, The Easter Bunny, The Tooth Fairy and JESUS.

When I requested this book, I did not know exactly what I would receive in the way of material to review, but I was pleased.

The well put together collection of graphics contained in the cover art portrays four of the central characters in the book and four of America's greatest cultural "myths". The who thrust of the story is that there are only three myths and one true story.

The cover presents pictures of Santa Claus and the strap of his pack over his shoulder, a tooth being carried off somehow by a sort of spritely ephemerous spirit, a hare, and a photo portrait of Jesus looking quizical - asking me to discount the arguments against his story because they are not logical. Only the truth is logical and he is the truth, so he seems to be saying with his eyes,

Logic is the basis of this truth, a point of contact for the reader with the author. This is not dull, dusty logic of old men in power or of doubters and detractors, but one of high spirits, joy, and jubilation as well. There is a Good Spirit overall in this book, and not an imaginary one.

This book is not a Bible-thumping indictment of non-Christian people or a Bible tract that brow beats him or her into guilt or terror. Witnessing done by those methods is awfully traumatic for others.

This book is not scary or highly emotional. It has a good humor and some fun about its pages, with a dose of facts as the author understands them.

The text progresses through a logical course of culturally experienced belief and disillusionment in myths and legends such as Santa Claus, the Easter Bunny, and the Tooth Fairy. The story takes a turn toward the Christian ideal of hope and presents the story of Jesus Christ in a way that children can understand and either accept or reject on their own.

If you are exploring faiths with your children as a means of cultural education, then add this small book to your lessons.

In the days of the old Christian revival tent meetings in the American West and Midwest, a young man aged 17 was miraculously healed of a terminal disease when he read and re-read the Bible for its healing passages. Later, as Reverend Kenneth Hagin, he wrote to answer questions put to him by the faithful and by non-believers as well.

They asked him if it were right for children to be taught to believe in a mythical Santa Claus, then next, to be allowed to discover that he is false; but then, to be asked to believe in God. How could children accept another lie?

Reverend Hagin wrote his answer from a viewpoint that, to him, was practical, common sense, and logical.

In his document, this Reverend Hagin held that children would likely not believe in an invisible Jesus, if they do not have some precedent to for such a faith in the unseen. In fact, he used Santa as an example in this case.

Reverend Hagin instructed adult readers that they might well let children believe, but also to explain clearly that the man called Santa Claus was an icon or avatar, a representation of a larger spirit of Christmas. I like that very much. I never believed in Santa, but appreciated the concept of a Christmas Spirit at an early age.

Children, Hagin felt, could feel the Christmas Spirit in the joy of the holiday season, in churchgoing during Christmas, and in receiving and giving presents to others, even helping the poor. Moreover, to help the less fortunate with gifts and shared time and love is a good way to spread peace.

Reverend Kenneth Hagin believed that this all would prepare children for future faith in a larger Spirit; namely, the Holy Spirit. He seems to be saying that the icon of Santa Claus might be used as a representative of Christmas in a parallel of Jesus Christ as a representative of God to mankind. This also is what the movie The Lion, The Witch, and the Wardrobe did in the 2000s: Santa Clause was a harbinger of Jesus Christ and God.

The author of this book I am reviewing, Mr. Vaughn Parry, teaches that as disappointed as kids can be when they discover there is no Santa Claus, they can have as strong an opportunity available not to lose faith in a real Jesus Christ. Some readers may not accept that as true.

Mr. Parry offers several logical reasons for his stance. He shows three myths that are associated with no logic, but folklore. He then a common sense, logical approach, as did Kenneth Hagin to teach youngsters about Christ.

Christmas toys and games often end up broken on the same day as they are received, but Mr. Parry teaches that the gift of Jesus is permanent and real.

The legend of the Easter Bunny is harder to maintain and his candy is consumed quickly. The Tooth Fairy is hard to support, what with lightly sleeping children and parents who forget to put coins under the pillows.

The tricky part about Jesus is that he is invisible.

One Out of Four

The author of this book presents evidence that Jesus Christ of Nazareth is not a man of myths and legends, but of miracles and truths. Sometimes scientist and non-believers speculate to the contrary, but Vaughn Parry uses a logic that is hard to oppose.

His evidence is that the supposed myths of the four characters highlighted in his book look as though they begin in the same manner. However, only one of these "heroes" - the last - provides a happy ending that can be used for a basis of real faith for those who chose it.

Three out of four of these childhood legends presented in our culture dissolve into extras on a set of light created by the remaining hero. The hare and the phantom tooth-collecting sprite are reduced to lies that hurt children unnecessarily. In contrast, legend of Jesus cannot be positively disproved with full certainty or to a statistical significance.

The book uses hilarious illustrations by Christine Alt Parry that season the text with humor. I like the one in which wedding guests taste water that Jesus has turned into wine... and it becomes a wine tasting event! One guest states, "The wine has grassy undertones..." Another offers, "I detect notes of seaweed, myself!" 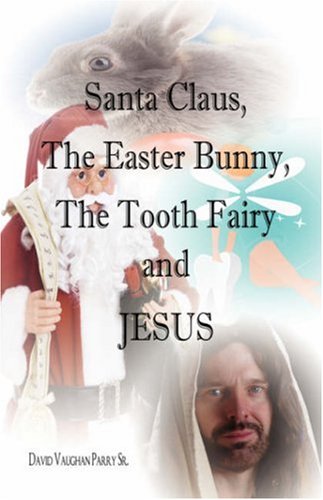 I did not expect at all what I witnessed as I turned to the last page of the book. On the final leaf was a drawing that caused me to laugh out loud and practically spray my beverage through my nose.

Today, I keep hearing the song used in the cartoon in my head and cannot stop it: a Rick James melody with Christian lyrics. But I actually want to keep it in mind.

The language used in the writing of this story is very clear and understandable. There is a bit of mild scatological reference used to show the frustrations felt by detractors to the Jesus story where their logic does not quite hold up and they look for other evidence against him. However, the words are very mild and make the frustrations real to the reader.

Santa Claus, The Easter Bunny, The Tooth Fairy and JESUS is long enough to be interesting and short enough to keep the reader's attention. A single reading session can finish the book while it provides a new viewpoint from which to consider the story of Jesus, or to research it further.

This book is an offering in good humor, not a brow-beating demand. It is not at all pushy or preachy. Children, older youth, and adults of all ages can read it quickly and accept it or not, but will likely at least look into it further.

This fun book might even be a good present to slip into Easter baskets and Christmas stockings.