Schopenhauer and the Poodles

I don't read many philosophical works....well okay, I don't read any philosophical works, not directly anyway..[ Who does...?] Sometimes I'll read a not too onerous excerpt or a summary provided by an easy to read middle-man and usually when I do I find the ideas pretty fascinating. Just as interesting are the philosophers themselves and I'm often left wondering how their life experiences impacted on their ideas. Take Arthur Schopenhauer, 1788-1860, whose seminal work The World as Will and Representationwas a significant influence on big thinkers such as Friedrich Nietzsche and Sigmund Freud.

When I look at pictures of Schopenhauer I see a man who has looked deeply into the world and doesn't like what he has observed His expression is grim, self-protective and rigidly set with a kind of internal stoicism.. The philosopher didn't think much of human existence. He recognised the indifference of nature and believed that we must be a "kind of error" and our lives entirely meaningless. Desire can never be satiated and dissatisfaction is an inevitable malady of living. Just like ants in a colony:

There is nothing to show but the satisfaction of hunger and sexual passion and a little momentary gratification now and then between endless needs and exertions.

Schopenhauers morose view of the world began early. At seventeen, after the suicide of his father in a canal, he was already gripped with what he described as "the misery of life" . Even earlier, at the age of six, he recalled how his parents came home one day to find him "deep in despair". He seems to have had a natural propensity to peer into the dark side, behind the social disguise of civilization to where savagery lies. Still, in many ways he was fortunate; a comfortable inheritance meant he was free to pursue the intellectual life he desired and he considered philosophy an art. In the scheme of things he had it better than most. Although he felt our own human helplessness, he also gave advice on how to deal with it. He believed that, if we don't expect too much, we may avoid the bitter dissapointments that blight so many lives:

Much would have been gained if through timely advice and instruction young people could have eradicated from their minds the erroneous notion that the world has a great deal to offer them.

I was very fond of them...if only they would have had me

Although he had his affairs, Schopenhauer wasn't all that successful with women. For a start it was a drag being a super-intellect:

Sometimes I speak to men and women just as a little girl speaks to her doll. She knows of course that the doll doesn't understand her but she creates for herself the joy of communication through a pleasant and conscious self-deception .

Perhaps he was a tad up himself but I'm guessing it was simple honesty. Often he preferred his own company to the deception:

A man of genius can hardly be sociable, for what dialogues could indeed be so intelligent and entertaining as his own monologues?

Nor did he get on with his own mother who was cold and rejecting.

Life is so Short

It doesn't seem he put much effort in to socialising with women either. When a friend suggested they go out cruising for girls [though probablly not in that language] Schopenhauer's reaction was *file under tedious* :

Life is so short,questionable and evanescent that it's not worth the trouble or major effort.

I guess he didn't think much of that old maxim 'nothing ventured, nothing gained'.

Unfortunately he had the added impediment of not being very good-looking, not that that's necessarily a block but Schopenhauer may have felt it keenly as he had faced an early, painful rejection from one particular woman, probably because of it. It certainly wasn't his only rejection...in The Consolations of Philosophy, Alain de Botton [one of my readable middle-men] describes a poignant incident where Schopenhauer, at 43, attempted to flirt with a young woman on a boat trip by shyly passing her a bunch of grapes. The woman later jotted down the incident in her diary;

I didn't want them. I felt revolted because old Schopenhauer had touched them, and so I let them slide, quite gently, into the water behind me.

There is a touching melancholy about that scene. Endowed with brain cells aplenty,it seemed the charisma gene had passed him by. He did manage a ten year on-again off-again relationship with a young singer, Caroline Medon, but with typical Schopenhauerian negativity, he dismissed the notion of marriage:

To marry means to do everything possible to become an object of disgust to each other.

Schopenhauer held strong opinions about the will to life, that is, natures inexorable force to roll forward the species, most often at the expense of an individuals personal happiness. According to Schopenhauer we do not choose our life partners because they are the most suited to us or will make us the most content; rather nature has chosen them for us, based upon the will to being's biological preference:

The coming generation is provided for at the expense of the present.

When potential mates meet, unconsciously they will choose that which will produce the most suitable offspring:

There is something quite peculiar to be found in the deep unconscious seriousness with which two young people meet for the first time, the searching and penetrating glance they cast at each other, the careful inspection of all the features and parts their respective persons have to undergo. This scrutiny and examination is the meditation of the genius of the species concerning the individual possible through these two. 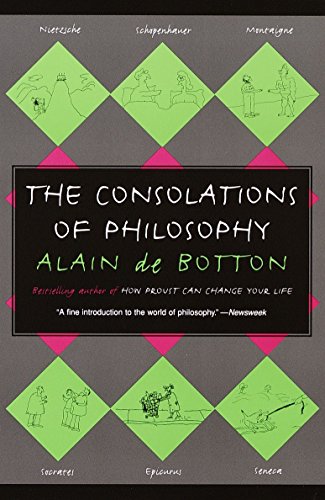 The Consolations of Philosophy
Buy Now

Poodles are Better than People.

Schopenhauer seemed to grow more irascible, eccentric and mysongynistic as he grew older....he was the ultimate pessimist's poster-boy. His tolerance levels weren't all that they should be and once he even pushed a woman down a flight of stairs for making too much noise. Yet he had one great consolation that saw him through his student days until his death; a stream of poodles, whom he adored and babied like humans. In fact he was said to have scolded them with the gentle invective, "You are not a dog. You are human. A human. A human!!", perhaps the greatest compliment he could conjure, or the greatest insult.

Interestingly, he called all his dogs the same name...Atma,[and nicknamed them Butz] the hindu word for the universal soul from which all universal souls arise. Some have suggested this may be connected to his theory of individuality and the idea that a particular type of animal expresses the Platonic ideal of its species.

Of course there's much more to Schopenhauer's life and ideas than can be found in this meagre offering and I'm told by reliable sources that he's refreshingly readable and has much to offer. Some scholars have suggested that he was far more attached to the world than he liked to make out and according to Anthony Kenny[cited below] he "lived the normal life of a self-centred academic". Yet looking at his portraits, there's something extra there. Maybe I'm just being fanciful but I see in his face...well, not even disappointment but more a sense of low expectations realised. It is a kind of... "see! I always knew life would be this crappy" expression ...and as he said himself:

A man's face as a rule says more, and more interesting things, than his mouth, for it is a compendium of everything his mouth will ever say, in that it is the monogram of all this man's thoughts and aspirations.

Schopenheaur lived according to his own view of the world and it couldn't be any other way, Still I can't help finding it a little sad that he couldn't fully embrace the advice of his mother's friend, Goethe:

If you wish to draw pleasure out of life, you must attach value to the world.

Coming soon: Nietzche and that Moustache

Alain de Botton The Consolations of Philosophy, Hamish Hamilton 2000 [from which I got most of the information for this hub]