Seidhr - Magic of the Norse

Magic Folk of the North

In Norse and Germanic society, supernatural influences were much feared and respected. As were the people that could manipulate these. There were those within society that could commune with the spirits and deities, foresee the future, alter or influence a person's luck or fortune, bless, curse, heal, influence the weather, and enchant people. Some lived within the villages and served a role similar to that of a shaman. Others distanced themselves from society, instead travelling and offering their services.

This is not a comprehensive list, and there are dozens of terms and kennings used in the Norse mythology to name those that practice magical arts.

The Sagas of Fridthjof the Bold
Buy Now

"Then they sent for two witch-wives, Heid and Hamglom, and gave them fee to send upon Fridthjof and his men so mighty a tempest that they should all be wrecked. So the witches sang their songs of witchcraft, and ascended the witch-scaffold with sorcery and incantations." [3]

The role of a magic worker was viewed as seriously as any other profession during this period of history. As such, a person would hire themselves out and offer their skills for a fee. Like any mercenary, a practitioner would seldom choose sides, but go where they were needed.

The appearance of a Völva would be cause for great excitement, and also worry, as if displeased, trouble could be caused for the household. It would not do to upset the woman who held sway over the spirits. Bed and board was provided before the performance, where the Völva would give her prophecy [4].

Accounts describe how a High Seat would be taken, and the Völva, with the help of an assistant (or assistants) would enter a trance. Her staff might be banged down on the floor in a rhythmic manner, or a drum might be beaten (known as "beating on a vett"). Singing might be used, particularly a vardlokkur (or vordlokur). This song's purpose is to attract and trap spirits, and also protect the Völva from harm during her ritual. Distaffs and weaving were also associated with magic, as these crafts are associated with the Norns who weave the web of Wyrd, to which everyone and everything is connected.

"Now when she came inside everyone felt bound to offer her fit and proper greetings, which she received according as their donors found favour with her. Master Thorkel took the prophetess by the hand and led her to the seat which had been made ready for her. Thorkel the nasked her to run her eyes over the household and herd and likewise the home. She had little comment to make about anything. During the evening tables were brought in, and what food was prepared for the seeress must now be told of. There was porridge made for her of goat's beestings, and for her meat the hearts of all living creatures that were available there. She had a brass spoon and a walrus-ivory-handled knife mounted with a double ring of copper, with its point broken off. Then when the tables were cleared away framer Thorkel walked up to Thorbjorg and asked what she thought of the household there and men's state and condition, and how soon he would be informed as to the things he had asked her and which men wanted to know. She replied that she would have nothing to announce until the following morning, when she had slept there the night through. But on the morrow, in the latter part of the day, she was fitted out with the apparatus she needed to perform her spells. She asked too to procure her such women as knew the lore which was necessary for performing the spell, and bore the name Vordlokur. But no such women were to be found, so there was a search made right through the house to find whether anyone was versed in these matters. 'I am unversed in magic', was Gudrid's reply, 'neither am I a prophetess, yet Halldis my foster-mother taught me in Iceland the lore which she called Vordlokur.'..... The women now formed a circle all round, while Thorbjorg took her seat up on the spell-platform. Gudrid recited the chant so beautifully and well that no one present could say he had ever heard the chant recited by a lovelier voice." [4]

A magic worker might be hired to help improve the fortune of a dwelling, or to curse an enemy. It was not unheard of for them to be used in war. There are accounts from as early as the 1st century BC that describe the Cimbri, a tribe from what is now southern Denmark, using magic in their warfare:

"Their wives, who would accompany them on their expeditions, were attended by priestesses who were seers; these were grey-haired, clad in white, with flaxen cloaks fastened on with clasps, girt with girdles of bronze, and bare-footed; now sword in hand these priestesses would meet with the prisoners of war throughout the camp, and having first crowned them with wreaths would lead them to a brazen vessel of about twenty amphorae; and they had a raised platform which the priestess would mount, and then, bending over the kettle, would cut the throat of each prisoner after he had been lifted up; and from the blood that poured forth into the vessel some of the priestesses would draw a prophecy, while still others would split open the body and from an inspection of the entrails would utter a prophecy of victory for their own people; and during the battles they would beat on the hides that were stretched over the wicker-bodies of the wagons and in this way produce an unearthly noise." [5]

Rhyming with "lathe", many attempts have been made to translate the word Seiðr, but it seems hard to pin down with any level of satisfaction. The Brothers Grimm translated it as "to seethe" or "to boil", whilst other translations include "snare", "cord", "a sitting", and "to shout".

“In the ancient North a race of Gods and Goddesses, called by the Scandinavians the Vanir, was worshipped. Central to their theology was the worship of the Lord and Lady, called in their language Freyr and Freyja. The “magic” or operative spiritual technology, practiced by these divinities, especially the Lady (Freyja) was called Seiðr. This magical technology was probably closely related to, if not virtually identical with, that known in the Old English or Anglo-Saxon world as wiccecræft.” [6]

Thorsson also describes Seiðr in the most simple was; literally "magik".

Katie Gerrard gives her own definition of Seiðr from her book, "Seidr: The Gate is Open".

“My definition of the term seidr for this book therefore becomes: Seidr is a term denoting supernatural actions within the Old Norse Sagas and is used in a similar way to the words ‘sorcery’ and ‘witchcraft’. Seidr in a modern practice therefore becomes rituals and actions that are inspired by the supernatural events referred to as seidr within the Old Norse literature.

“In many cases, the rituals were probably mysterious to the writers of the Sagas themselves, who may have learned of them from textual accounts or hearsay reports” [7]

A Seiðr worker may work with the local spirits in their area. Known as land-wights or Landvættir, these spirits might be influenced for good or ill by those that have a good relationship or otherwise know how to work with them. Ancestral spirits such as the matriarchal Dísir might also called upon.

Besides the High Seat ritual, the act of Útiset ("sitting out") could be used to connect with the spirit of one buried in a mound. The practitioner would typically spend the night meditating upon a burial mound in the hopes of receiving a vision or message.

The deities Freya and Odin are considered the main patrons of Seiðr, although other deities are associated with magic. Frigg possesses the gift of the seeress, although she may not speak of what she sees. Sif too, also has some gift with magic. Loki is gifted with the magic of the Jotunns, whilst Gullveig is considered by some to be the Vanic patroness of witchcraft.

According to the mythology, Freya taught Odin the art of Seiðr seemingly in an act of friendship after the war between the Aesir and Vanir was over.

Freya uses a cloak of falcon feathers to travel, which is seen as a metaphor of "journey work", which a Seiðr worker uses to travel whilst under trance to seek a vision.

Whilst hard to define, Norse magic might be classified into three main categories.

I would describe Seiðr as the skills that deal with subconscious. This would include the art of glamoury and confusion to befuddle, psychological mind tricks including a repertoire of some skills that now fall under what we now call NLP, altered consciousness, spirits, trance journeying, and energy manipulation.

Spá might be considered as the work of a seer or seeress and covers prophecy and the manipulation and influence of a person's fate or destiny.

Galdr covers any magical practice that uses the power of will and the conscious mind which includes rune magic and spell-singing, healing remedies, charms, and curses. It is the part of magic that focuses intent around the spoken word or song. Odin is the chief patron of Galdr, as it was to him that the runes were gifted.

The above are often interpreted differently, and there is no agreed definition that prescribes a particular magical discipline within a specific category.

So What's the Difference Between a Völva and a Seiðkona?

Essentially, not a lot. There are various terms used for those that practice the Norse magical path, but modern interpretation has resulted in certain people catagorising themselves within this with certain titles.

If we assume that Thorsson's interpretation of Seiðr is applied to "magic", then a Seiðkona or Seiðrman is a person that practices magic. In modern times, we see the term Völva being used typically by women who specialise in divination and mediumship, with the use of the High Seat for their rituals. Whilst this role is seen as traditionally feminine, there is nothing to stop men from doing this too, despite the historical stigma of ergi.

The recent renewed interest in esoteric practices of European cultures have led to a resurgence in numbers of people studying Norse, Germanic, and Anglo-Saxon spirituality and the magical practices around it. Like any historic belief system, there are many pieces of the puzzle missing, with only a few texts to attest prescribed techniques. A degree of guesswork, trial-and-error, and borrowing from local folk-magic has needed to be used reconstruct this important role of early Germanic society. 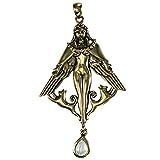 Witchdom of the True, Vol. 1: A Study of the Vana-Troth and the Practice of Seidr
Buy Now

[1] The Poetic Edda, The Lay of Hyndla (Hyndluljoth, Bellows Translation)