Sri Yantra to Get Rid of Witchcraft Spells and Evil Spirits

Sri Yantra or Sri Chakra is a divine instrument that absorbs cosmic energy.

It is popularly mistaken to be a symbol of Lakshmi, the goddess of prosperity and wealth. Sri Yantra is actually a representation of Lalitha Mahatripurasundari or Parvathi, the consort of Lord Shiva. The term Sri is used to denote the reverence to be given to the holy Yantra. The Sri Chakra is often referred as King of all Chakras (the Chakra Raja) or a supreme instrument in the path of spiritual advancement. It possesses the power to purify mind and body of humans. It is also used an instrument to ward off evil and get rid of witchcraft spells.

Sri Yantra is a divine storehouse of energy which absorbs cosmic rays from the magnetosphere of the Earth, the planets and other objects in the universe. The yantra transforms the cosmic rays into constructive or positive vibrations which are then transmitted to the surroundings. It has a power to destroying all destructive forces within the vicinity. The supreme hidden powers can be noticed within a short span of time.

Mr. Siddegowda, the lawyer and his horrifying experiences

People residing in some places of south India are often troubled by witchcraft spells. A few sorcerers in Andhra and Kerala are active in casting spells. One can feel depressed with nightmares and insomnia because of the spell cast on him/her.

A private TV channel, TV-9 recorded a person’s horrifying experience. A lawyer by name Siddegowda experienced a peculiar kind of problem. He, his wife and children started hearing voices within their house. A strange shadow always followed his wife while she was moving around at home. In the night, after they went to bed they heard as if someone wearing anklets was moving all along the house. The ringing sound of anklets never allowed them to sleep. Kitchen ware and utensils fell down by itself. Scratch marks were seen on his wife’s body. When she woke up from her sleep she had scratch marks on her face and body. There was also a bit of facial swelling. He approached many sorcerers to get rid of this problem but all his efforts went in vain. He consulted astrologers and visited many temples thinking that he might get some relief. But nothing worked for him.

After some days, Siddegowda’s children also suffered from the same problem. Siddegowda had problems within his stomach. He had acute pain and most of the time vomited whatever he ate. All these strange conditions at home made him and his wife scream at night. All the family members thought of committing suicide. They were also in search of a permanent solution for all the problems. In front of TV cameras he shared all his experiences and stated that only the person who suffers knows how horrible the experience really is.

As an educated person he never believed in evil spirits and witchcraft spells. But later he was forced to believe all this. He came to know from astologers that his relatives were the main cause of the trouble. They did not want him to prosper and grow. They had cast a spell of Bhanamathi, a deadly witchcraft, through a sorcerer from Andhra region.

Siddegowda’s friend gave him a suggestion. He told him to go to an ancient temple which was thousands of years old. It was located in Mandya district, southern part of Karnataka state. The place is none other than Srirangapatna where the most audacious king of Mysore, Tipu Sultan had built his summer palace. It is situated about 14km from Mysore and 125km from Bangalore.

At the heart of the Srirangapatna, the Kshanambika Temple is located. It was Sri Shankaracharya, a great yogi with supernatural powers who consecrated and installed the Sri Yantra in front of the Goddess Kshanambika, in this temple. It has divine powers and grants wishes to people who come to seek the blessings of the goddess.

Siddegowda went to the temple along with his family and wept bitterly before the Yantra. His problems were solved in no time. He never experienced such deep trouble again. 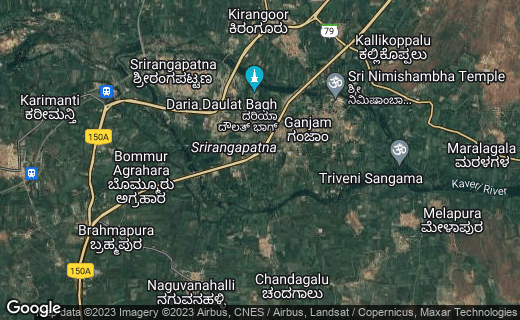 Sri Yanta has the power to grant wishes

Sri Yantra at Kshanambika temple not only gives relief from witchcraft spells but also grants wishes to anyone who wants stability of mind and achieve the best results in education. The place in and around the temple is totally filled with divine powers and positive energy just because of the Yantra.

It clears all the negative energy generated from any matter or evil deeds. It creates a channel for the smooth flow of wealth. The consecrated shri yantra, along with the energised mantra of the goddess that includes 2160 major energies creates waves of positive energy within the house.