Strong Women From Indian Mythology Who Inspire Us Even Today

The mythological tales we grew up listening to describe diverse and conflicting female characters- ranging from the beautiful & gentle Sita to the fierce Kali to the seductress Menaka. Female characters in Indian mythology are portrayed as ‘ideal’ or ‘negative’. These characters are more intriguing than anyone can imagine. Beneath their vulnerable characters, these women had a strong personality with a mind of their own. Here are some of the most fascinating and enigmatic women in Hindu mythology who inspire us even today:

Ram wanted to marry a woman in front of whom he would be compelled to bow his head in admiration.

Sita was an epitome of beauty, grace and sacrifice. Though a symbol of tolerance, sacrifice and all the good feminine virtues, her immense love for Lord Rama has always dominated her dynamic characteristics. She was a woman of tremendous inner strength and never hesitated to speak up when the need arose. Here strength of character and mind were quite evident during the long years of exile with Lord Rama and also during her captivity when Ravana abducted her. She raised her sons as a single mother. She was a woman of strong self-respect. When she was asked to prove her purity again, she took refuge in her mother- Goddess Earth.

Born from fire-sacrifice, Draupadi is perhaps the most powerful and enigmatic female character one would come across in Hindu mythology. She was beautiful, intelligent, fearless, fiery, strong-willed and loyal. She sacrifices the luxuries of the palace to be with her husbands during the exile. She was publicly humiliated when Duryodhana ordered to disrobe her in the royal assembly. But she protected herself by her sheer devotion to the Supreme Lord Krishna. Not only this, she vowed to take revenge from this public humiliation which led to the great war of Mahabharata. She was undoubtedly one of the first feminists in our scriptures. 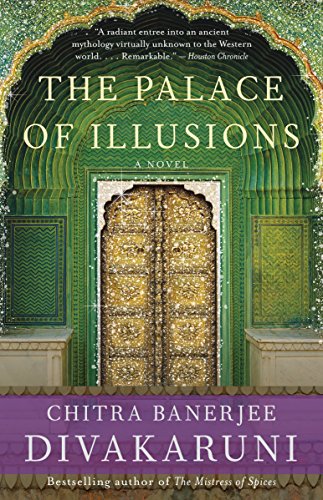 The Palace of Illusions: A Novel
'The Palace of Illusions' presents the events of Mahabharta from Draupadi's point of view. I enjoyed reading the book because it provided a different perspective to the tale of Mahabharta. I also liked the way the author has beautifully portrayed the unique bond of friendship between Lord Krishna and Draupadi. A must read if you like reading mythological fiction!
Buy Now

By going with him, I would have simply imposed myself on him; I would have been a distraction. I helped him follow his heart and his greater good.

Urmila is often described as either Sita’s sister or Lakshman’s wife. Her character doesn’t get the glory she deserves. After all, it’s not easy to be the wife of a prince who decides to leave his wife behind to accompany his brother for a fourteen years long exile. Urmila wanted to accompany her husband but stayed back when Lakshman insisted that he will not be able to serve his brother if she came along. Urmila waited patiently through the long years of exile and took care of the family with devotion and compassion.

Sita's Sister
Urmila's character has always fascinated me. Not much is written about her in Urmila. When 'Sita's Sister' came out, I knew I had to read it. The book is written from Urmila's point of view and narrates the events of Ramayana from her perspective. If you are interested in Indian mythology then you must read it.
Buy Now

The extremely beautiful Savitiri was an epitome of devotion and purity. Due to her divine love and dedication, she was able to save bring her husband Satyavan back from Lord Yama’s clutches. Savitri was wise and astute speaker. With her words of wisdom, she impressed Yama, the Lord of Death who granted Satyavan’s life as a boon.

Mandodari was a devoted wife to Ravana, the King of Demons. Yet she did her best to make Ravana a better person. She wasn’t afraid of Ravana and kept warning him about his wrong deeds which would lead to only destruction and nothing else. Despite of Ravana’s flaws and misdeeds, she loved him deeply and was loyal to him. She was righteous even while living among demons all her life.

Hidimbi was the demon wife of Pandava Bhima and mother of Ghatotkach. She saw Bhima in the forest when Pandavas were in exile. She fell in love with him and wanted to marry him. Bhima agreed on the condition that he would leave her once she bore a child. But this didn’t deter Hidimbi. After marriage, they lived together only for a limited period of time. Hidimbi was a single mother who raised a son with all the right values and qualities. She never claimed any rights for her son even though Ghatotkach was actually the eldest Pandava son.