Tarot - How to Read the Minor Arcana

When learning how to read tarot cards, the attempt to memorise long lists of possible meanings can be very confusing. However, there is an easy and practical way to surmount this.

Tarot sets are made up of two main sets of cards known as the major and minor arcana. The major arcana can be thought of as the primary causes (or influences) within a person's life, whereas the minor arcana depict the effects.

Drawing on my own experience of using tarot for nearly three decades, I now share this simple guide to understanding and remembering what each of the minor arcana mean.

The minor arcana are divided into four groups (or sections) called suits. These are Wands, Cups, Swords and Disks.

Some tarot packs use variations of these names. Hearts might be called Cups or Chalises. Swords might be called Spades. Disks may be named Diamonds or Pentacles. Wands are sometimes called Clubs, Batons, Sceptres or Rods. These names reflect the aesthetic taste of the card's design, yet principally the meanings remain unchanged.

If you think this sounds similar to an ordinary pack of playing cards, you would be correct. It is usually accepted that playing cards evolved from tarot cards.

Air symbolises ideas, inspiration and creativity (in the widest sense.)

If you memorise these four divisions, you are already on your way to interpreting the minor arcana more easily.

All tarot cards have a positive (beneficial, joyful, pleasurable) meaning as well as a negative (unfortunate, difficult, painful) meaning. Life is not all wine and roses, and tarot cards reflect this.

There are two main ways of using tarot cards to indicate whether a particular interpretation should be positive or negative. One way is to turn the cards while shuffling them, so that when they are laid in a spread some of the cards will be upside-down - and these cards are then read as negative.

The other way is to interpret a card in accordance to which cards are close to it, by intuitively combining the dominant influence described via the joint symbolism.

Experiment with both methods over time to see which you prefer. 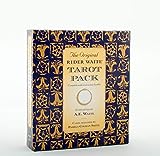 Each of the four suits of minor arcana consists of an ace (or one), cards numbered from two to ten, followed by a Page, a Knight, a Queen and a King - just as with an ordinary pack of playing cards.

In some tarot sets, these names may vary. For example, the Page may be called a Knave or Princess. The meanings, however, vary little, and are derived from numerology.

These very basic meanings are intended to be interpreted in accordance to which suit they appear in and with which cards are nearby in a divination spread.

However, if you memorise this short list you you can easily side-step the need to try to remember other vast, complex lists of interpretations as found in most 'How To' tarot books.

Practical Exersise with the Minor Arcana

This simple exersise will help strengthen your understanding of the minor arcana, using the system described above.

Work through the four suits in a similar manner.  You make wish to make notes of your observations, and build on these as your experience and understanding of tarot cards grows.  Interpreting symbols is very much an intuitive process - often there are no absolutes, no cut-and-dried rights and wrongs so much as multitudinous layers of meanings within the symbolism which are revealed over time, as a practitioners skill develops.

Having grasped this easy method of understanding the basics of how the minor arcana relate to each other, over time and with sustained practice your skill with tarot will develop and you will be able to add much to the simple guide described here.  Let me know how you get on.

Alternatively, if you are already a skilled tarot reader, then feel free to share your opinions of the method shared on this page in the comments section below.