For the Love of Tarot - The Empress Card Outcome

The Empress - She also represents creation, for it is in her womb that the next generation shall be born. She is the birth of ideas, she is the carrier of the creation waiting to be born.

For this I looked at four different decks: Alester Crowley’s Thoth Deck, The Aquarian Deck, the Spiral Deck, the Hudes Deck, and a tarot deck kit.

I have gone through each one and written my observations and compiled them into thoughts and interpretations in my personal Tarot Journal.

In the Thoth deck the card for the Empress is filled with spring colors – oinks, greens, and blues. Her torso faces forward, but her knees are swung to the right and she looks back over her right shoulder.

Two large round orbs float in the foreground with the moon in the center of each. There are two birds on either side of her as well as the shield leaning against her legs, containing the emblem of two eagles facing each other and their heads surrounded by a drawing of the orbs. In the bottom left corner is a pink stork (?) in her nest with four chicks.

The Empress’s skirt is a rich green and her top is pink with flowers and bees decorating it, as well as the first two squares of the golden mean – or is it the Fibonacci Sequence? – Two squares (not rectangles) connected.

Egyptian deity with an equal-armed cross on the top.

The Hebrew letter is Dalet, which is the English letter D and number 4. The Ruling planet in the card is Venus.

In the Aquarian deck, the Empress holds a shield with Venus’s glyph on it. She has a pink shawl about her shoulders with a lavender and turquoise shirt under. Her hair is long and brown and she wears a cup of flames with 12 stars with dots in the middle. She holds a scepter in the crook of her right arm, under which what grows. Behind her are tall cliffs and a waterfall.

Why 12 stars? What does the waterfall mean?

The Spiral deck depicts her as a woman on a thrown in a wheat and poppy field. Around her grow white lilies. Under her left foot is a moon. She wears a long, deep red cloak decorated with roses, while her dress is a forest green also decorated with roses. Hearts and the astrological symbol for Venus decorate the arms of her thrown. She carries a scepter in her raised right hand.

Her hair is a golden blond, and a gold sphere circles her head, bordered by 12 stars. A white dove flies within the gold circle above her head. To her left is the Tree of Life and to her right is the symbol for Earth and Dalet. Behind her is a small waterfall and a pond emerging from a fruiting wood.

The Hudes deck shows a pregnant Brunette woman. In her left hand is a shield with a moon/sun combination. In her right hand is a scepter. She looks to the right. She wears a lavender dress with a green shawl. Behind her are leaves.

The Kit deck actually has a really cute picture on it. It’s a busty lady in a green top. Head and hair combined, her head is the shape of a heart. Her arms are raised and turn into viney bouquets of flowers. Below her boobs is a Venus sign.

With the exception of the kit deck, each Empress holds a scepter or similar, in her right hand, and adding the Spiral deck to exception, each have a shield to her right. The moon is apparent in all but the Kit and Aquarian decks.

Venus is the planet of Beauty, and womanliness. Red and green are fertility colors, I think, as well. In the Thoth deck, the flowers, I believe, on her shirt are feminine while the bees are masculine. The orbs on the Thoth deck, I think, might be to represent the Embryo.

What do the Cards Say?

“She is seated in traditional posture. This posture represents salt, the inactive principle of nature. The lotus *flower in her hand* typifies the feminine or passive power. The bees on the robe compared with the Fleur de Lys, suggesting the French origin of the symbol; the belt is the zodiac. The pelican may be identified with the Great Mother and her offspring. It represents the continuity of life and inheritance of blood uniting all forms of nature. The while eagle typifies Alchemical Salt, and the white tincture, the nature of silver.

“This woman, in her all-embracing receptivity, incarnate womanhood, holding the lotus, wearing the belt of the zodiac, surrounded by her Venus birds, the pelican of self-surrender and the heraldic white eagle of salt.”

The Aquarian has this to say:

“Reversed: sterility, wastefulness of resources, indecision, disruption of life at home or in society.”

Modern Magick, by Donald Michael Kraig, defines the Empress along the same lines –

I think it is important to remember that Fertility in tarot is not always a synonym of impregnation, but of creativity as well. As a female, it is something I forget, and will generally jump to the panic of personal fertility.

In the Rider-Wait Tarot displayed in 2-Hour Tarot Tutor, the Empress wears a crown of 12 stars and a long flowing white dress. She holds a scepter and is in a similar sitting position as in the Thoth deck, though she looks forward instead of back. To her right is a heart-shaped shield with the astrological symbol of Venus. Before her grows wheat. Behind her is a forest from which a waterfall emerges.

“A mother, mother-type figure (grandmother, or aunt), a mother-to-be (a pregnant woman), artistic or creative ability.”

The Spiral deck says the empress is Demeter, and her daughter Persephone. Persephone was stolen by Hades into the underworld. Demeter represents the Earth’s light loving, creative, conscious side while Persephone became the queen of the Underworld. “Symbolizes the unconscious, dark nature of the Empress. In the state, she’s unreceptive, withholding her love and creativity.

“The Empress card is associated with the planet Venus/Aphrodite. Venus rules both the astrological signs Libra and Taurus…Libra describes the Empress’s need for relationship and love, her eye for beauty and harmonious surroundings…Taurus connects her to the earth and and her fertile sensual nature.

“In this card, the Empress wears a gown of red and green, the colors of fertility…the rose is sacred to Venus…in her hands the Empress holds a spiral, indicating the holds the secrets of the seasons and of life/death process. Her foot rests upon a crescent moon, her connection with the feminine principle. Above her head flies a white dove, symbolic of God’s female soul…The waterfall behind the throne is symbolic of the waters of life and the Empress’s connection to the unconscious realm of the High Priestess and the Moon.

“…The bright, glowing disk behind the Empress is symbolic of the Evening Star, the Goddess of Love.”

The Shield is a reminder that Venus is the morning star, the first to rise for battle.

On the Tree of Life, the Empress is on the 14th path, connecting Chochma (Wisdom) to Binah (Understanding). “The path of the Empress joins the two pillars [of the Tree of Life] representing the masculine and feminine forces. The letter is Daleth, meaning door: the door of knowledge, transition, and illumination.”

“When the Empress appears in a spread, she may indicate a fruitful period in our lives. Our creative urge to be productive may become pressing. Mother, lover, wife issues could come into focus. The creative Empress, in her positive aspect, teaches us to love but not smother. The creative artist must learn to let go of his or her creations; the loving mother must ultimately let go of her children.”

“The Empress represents physical reality,” says Wisdom in the Cards. “She assists us in developing a good relationship with our body and the world in which we live.”

According to the interpretation, the Empress, being ruled by Venus, is to remind us of inner beauty, unique physical beautify, and external beauty of the world around us.

The kit deck advises to “Express your ideas and take calculated risks. Getting what you want is your responsibility. Your passions are of primary importance to you now. News of a weeding, pregnancy, or children arrives.”

What the Empress Means to Me

In Quabala, there are veils of the Tree of Life. Ain, Ain Soph, and Ain Soph OR. Nothing, without limit, limitless light, respectively. Everything must have an opposite, but God has no opposite, so God is No-Thing. However, anything which is complete has components of masculine and feminine. The Empress is the Feminine component of the Universe. She creates, loves and nurtures, creates cycles of the seasons and the Tides. She is death which recycles into life.

Books Used or Recommended for the Hub 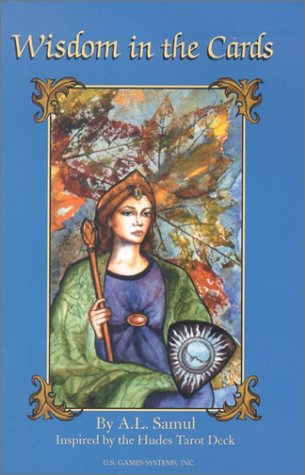 Do you need to center yourself before a reading? Please feel free to try this Simple Relaxation Ritual