The Angels of Mons

In 1930, the British newspaper The Daily News had a story that first was published by a New York newspaper. If a former member of the Imperial German Intelligence Service was to be believed, British troops had in 1914 really seen what they called The Angels of Mons...

The Bowmen, by Arthur Machen

In september 1914 the famous fantasy and horror writer Arthur Machen published his story The Bowmen in a British newspaper, but he made it look like a true account of an eyewitness.

The story told how during the retreat from Mons (Belgium) in august 1914, some English soldiers saw advancing Germans dropping down by whole regiments, due to the fact that one of them said, half in a joke: 'May Saint George be a present help to the English!' What happened? Saint George came along and he brought with him the ghosts of the bowmen who were in the battle of Agincourt, in 1415. The Germans were pierced by their ghostly arrows.

For the next few months, nothing particular happened. But some time in 1915 it was pointed out that people were taking the story as true. Then they began to turn the bowmen into angels, and they elaborated the story and changed it in all sort of ways.

Private Robert Cleaver, for instance, declared under oath that he personally was at Mons and saw 'the Vision of the Angels' with his own eyes. He was together with some other soldiers in retreat and lying down behind small tufts of grass for cover. Suddenly the vision came between him and the German cavalry. Het described it as a 'flash'. The cavalry horses rushed in all directions and were disorganised, and the charge frittered away.

Two officers reported to the press that 'a ring of angels' appeared round a contingent of Germans. The apparition caused the Germans' horses to become unmanageable.

A mister Rawson, who was al well-known authority on occult phenomena, stated that the apparition could have been caused through one of the English being a very religious man: 'If it was his particular form of belief that angels would surround a man, then this thought could sufficiently intensify the matter to enable another man who was psyhic to see the apparition. That person might not know he was psychic, but, seeing the ring, he would state the fact aloud. The thoughts of those around would intensify the form, and all present would see them. The horses would see it easily, because animals are more psychic than human beings. That is to say, they can see finer forms of matter than the ordinary human being can possibly see.'

The most famous legend and the greatest myth of the Great War was born. British troops who were in Mons during the last days of august 1914 reported that they also had seen 'angels the size of men', which appeared to be in the rearguard of the retreating army. Their reports were attributed by psychologists to mass-hypnotism and hallucination, but in 1930 a former member of the Imperial German Intelligence Service declared that they really could have seen something.

This ex-officer, Colonel Friedrich Herzenwirth, said in a New York newspaper that 'the Angels of Mons were motion pictures thrown upon "screens" of foggy white cloudbanks in Flanders by cinematographic projecting machines mounted on German aeroplanes which hovered above the British lines.'

Colonel Herzenwirth said the object of the Germans responsible for these scientific 'visions' was to create superstitious terror in the Allied ranks, calculated to produce panic and a refusal to fight an enemy wich appeared to enjoy special supernatural protection.

But the Germans miscalculated: 'What we had not figured on, was that the English should turn the vision to their own benefit. This was a magnificent bit of counter-propaganda, for some of the English must have been fully aware of the mechanism of our trick. Their method of interpreting our angels as protectors of their own troops turned the scales completely upon us. Had the British command contented itself with simply issuing an Army order unmasking our trickery, it would not have been half as effictive.'

Colonel Herzenwirth explained that the Germans were more successful with their cloud motion pictures on the Russian front in 1915. The Virgin was shown with uplifted hand, as if motioning to stop thye murderous Russian night attacks. As had been the case in Flanders, the German planes carrying the magic lanterns with enormously powerful Zeiss lenses flew above the enemy lines. A dense snowbank in the sky above the German Army was used as a screen. Entire regiments who had beheld the vision fell upon their knees and flung away their rifles.

The trick was repeated several times on the Russian front and was invariably successful. 'We knew from prisoners we took,' said the Colonel, 'that in some cases companies actually killed their officers and flung their rifles away, shouting that they would not be guilty of firing upon an army over which the Mother of God hovered in protection.'

With the French in Picardy and the Champagne region the Germans made another miscalculation, hower. 'Instead of taking the figure of a woman that we threw upon the clouds one night as that of the Virgin or a saint protecting our army, the French promptly recognised Joan of Arc. The tables were turned upon us once more when we changed from a woman to a man in Flanders. The British said it was Saint George.'

Spirits of War: Angels of Mons

The day after the Daily News published the interview with Colonel Friedrich Herzenwirth, their Berlin correspondent received this message:

'A prominent member of the War Intelligence Department in the present German Ministry declares that the story is a hoax, Herzenwirth himself a myth or, if existing, a liar. It is officially stated that there is no such person.' 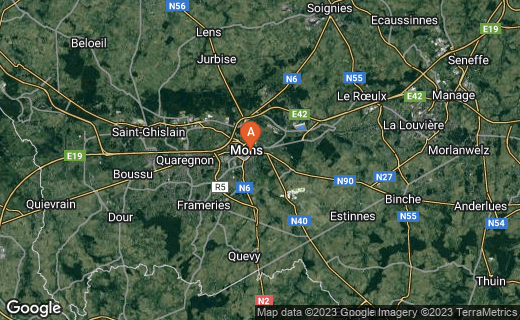 The White Dove of Peace

In the first days of November 1918, when President Wilson and the Germans were holding preliminary discussions concerning a cease-fire, the tale ran across the American front that a White Dove of Peace had, on a clear day, circled the lines for more than an hour. According to the testimony of a colonel and two majors, it was a complete white aeroplane, of a type unknown on the western front, not carrying an insignia of any kind and flying very high. The White Dove passed over the American trenches, circled the German lines and disappeared...

Phantoms of the Great War