Peter is a student of all religions. He seeks out beauty and truth wherever it may be found

The continent of India has, within its religions and culture many truly epic tales. One of these legends is the Mabharata. It is within this legend that the Bhagavad Gita appears. The Mabharata is the tale of a feud between two clans; the five sons of Pandu and the one hundred sons of Dhritarashatra. Pandu and Dhritarashatra were brothers. Pandu had died and Dhritarashatra was blind. This is a tale of warring clans with the irony that they were cousins. The climax of the Mabharata is a battle that takes place on the field of Kurukshitra. Just before the battle commences Prince Arjuna, one of the heroes of the tale, asks his charioteer, Krishna, to drive him between the lines of the opposing armies so that he may look over and gauge the disposition of the enemy. He halts the chariot but when he looks over he sees his grandfather and his cousins, he sees his teacher and the many friends of his childhood and he is filled with dismay. He turns to his charioteer and asks:
1: 28-30
“Krishna, I see my kinsmen gathered here, wanting war. My limbs sink, my mouth is parched, my body trembles, the hair bristles on my flesh. The Magic bow slips from my hand, my skin burns, I cannot stand still, my mind reels. I see omens of chaos, Krishna, I see no good in killing my kinsmen in battle.”
Then it is as if a time warp occurs. Everything stands still, nothing moves other than Arjuna and his charioteer for then, Krishna reveals that he is God. He has incarnated as a man specifically for this purpose. Now he begins to instruct Arjuna and these instructions are called the Bhagavad Gita, The Song of the Blessed One.
The religion that arose from India is often called “Hinduism” but Hindu is a foreign
idea used by the Arab invaders of the 8th century to refer to the language and customs of the people who worshipped Gods such as Shiva and Vishnu. It would be more correct to consider the religion and its various sects as “Vedic” The Vedic religion does not owe its origin to a man or prophet. It has no founder as in the case of Moses, Christ or Mohammed, instead it evolved over centuries containing the legends of an ancient people, the Vedic Hymns, the ritual texts of the Brahmanas and the mystical Upanashads.
The Vedic concept of spirituality is based on the Sanskrit word “Dharma” Sacred Duty this refers to the moral order that sustains the Universe, Society and the individual. This religious concept is very aware that Humans are not the same and that for each of us there are different ways to approach God. So there are four “Yogas” or Disciplines;
Jnana yoga Reflective discipline, advancing towards God by knowing him.
Bhakti Yoga Affective discipline, those who live more by their hearts than their heads, draw close to God by loving him.
Karma Yoga Active discipline, drawn to God by serving Him.
Raja Yoga Meditative discipline, is for those who are drawn to God through deep meditation.
One further point of background to the Gita; King Dhritarashatra is not at the battle. The sage, Vyasa, who is credited in the story as being the author or chronicler of the events in the Mabharata gives the King a gift. The bard, Sanjaya, will have the vision to see everything that is taking place on the field of Kurukshitra and it is Sanjaya’s narrative that we are reading when we read the Bhagavad Gita. So the Bhagavad Gita begins with the words of the King Dhritarashatra; “Sanjaya, tell me what my sons and the sons of Pandu did when they met, wanting to do battle on the field of Kuru, on the field of sacred duty.”

Mere Gurudev, a meditation on the love of Krishna, by Hare Das

The Bhagavad Gita is divided into chapters called Teachings. The first Teaching is the question of Arjuna’s dejection in the face of his moral dilemma and ends with Arjuna;
“Saying this Arjuna slumped into the chariot and laid down his bow and arrows, his mind tormented by grief.”
The second Teaching is where Krishna urges him to get up and fight beginning with; “Why this cowardice in time of crisis, Arjuna? The coward is ignoble, shameful, and foreign to the ways of Heaven. Don’t yield to impotence! It is unnatural in you! Banish this petty weakness from your heart. Rise to the fight, Arjuna.” The second Teaching also speaks very clearly on the immortality of the soul;
2:11, & 27
“Never have I not existed, nor you, nor these kings; and never in the future shall we cease to exist.”
“Death is certain for anyone born, and birth is certain for the dead. Since the cycle is inevitable, you have no cause to grieve.”
Krishna also speaks of discipline and inner strength. This Teaching ends with the words;
“When he renounces all desires and acts without craving, possessiveness or individuality, he finds peace. This is the place of the infinite spirit. Achieving it, one is freed from delusion. Abiding in it even at the time of death, one finds the pure calm of infinity.”
The third Teaching is the Discipline of Action. It begins with Arjuna asking;
“If you think understanding is more powerful than action, why, Krishna, do you urge me to do this horrific act?”
Krishna begins his reply with; “A man cannot escape the force of action by abstaining from actions. He does not attain success just by renunciation.”
Krishna goes on to speak of actions done without attachment to the outcome. A lost cause is still a cause and we must act without desire and so come to know ourselves truly. He ends with “Knowing the self beyond understanding, sustain the self with the self. Great warrior, kill the enemy menacing you in the form of desire.”
The third discipline deals with Knowledge, particularly self-knowledge. In this Teaching Krishna reveals something of Himself and His numerous incarnations;
3:7, 8
“Whenever sacred duty decays and chaos prevails then I create myself, Arjuna. To protect men of virtue and destroy men who do evil, to set the standard of sacred duty I appear in age after age.”
In the sixth Teaching, The Man of Discipline, Krishna makes a statement of Divine Love that truly resonates with those who see all things as sacred.;
6:30
“If you see me in all things and see all things in me, then you will never lose sight of me, and I will never lose sight of you.”

The True form of God

It is in the eleventh Teaching that something amazing occurs. Arjuna asks a favor. He asks Krishna to reveal himself in his true form; he wishes to see what God truly looks like. At first Krishna is reluctant, he tells Arjuna that he would not be able to bear it. Arjuna pleads and Krishna finally relents. Krishna arranges it so Arjuna will see him through the eyes of spirit rather than through mortal eyes. Even so, Arjuna can bear the sight for only a short time. In the true form of God Arjuna saw the complete universe, with all its suns and all its beings; every creature and every God and spirit. Everything that exists with with all their sounds and scents, bound in one glorious form. At this point, Sanjaya breaks his narrative to say to the King a verse that was quoted by Robert Oppenheimer when the first atomic bomb exploded at Los Alamos;
“If the light of a thousand suns were to rise in the sky at once, it would be like the light of that great spirit.”
The narrative continues;
11:13, 14
“Arjuna saw the entire universe in its many ways and parts, standing as one in the body of the God of Gods.Then, filled with amazement, his hair bristling on his flesh, Arjuna bowed his head to the God.”
Krishna again speaks of the impending battle and assures Arjuna that he is to give no thought to who he kills for all beings are made and destroyed by him.
11:33
“Therefore, arise and win glory! Conquer your foes and fulfill your Kingship. They are already killed by me. Be just my instrument, the archer at my side.”
On returning to the form of the charioteer Krishna expresses his love for Arjuna;
11:47
“To grace you, Arjuna, I revealed through self-discipline my higher form, which no one but you has ever beheld, brilliant, total, boundless, primal. Not through sacred lore or ancient ritual or study or charity, not by rites or by terrible penances can I be seen in this form in the world of men by anyone but you, Great Hero.”

The 17th Teaching refers to the three aspects of faith; OM, SAT, TAT;
17:34. 35, 36.
“OM, knowers of the infinite spirit chant it as they perform acts of sacrifice, charity and penance, prescribed by tradition.
TAT, men who crave freedom utter it as they perform acts of sacrifice, charity and penance, without concern for reward.
SAT, means what is real and what is good, Arjuna; the word SAT is also used when an action merits praise.”
In the eighteenth Teaching the “Wondrous Dialogue” is completed. Here Krishna speaks of understanding, Joy and Heroism. He also speaks of the intrinsic nature of each being and urges not to shrink from duty.
18:48
“Arjuna, a man should not relinquish action he is born to, even if it is flawed. All undertakings are marred by a flaw, as fire is obscured by smoke.”
The dialogue itself ends with Arjuna stating;
“Krishna, my delusion is destroyed and by your grace I have regained memory. I stand here, my doubt dispelled, ready to act on your word.”
The Bhagavad Gita itself ends with the words of Sanjaya. The last three words of this verse and of this scripture are highly significant and deeply profound.
“Where Krishna is Lord of Discipline and Arjuna is the archer, there do fortune, victory, abundance and morality exist. So I think.” 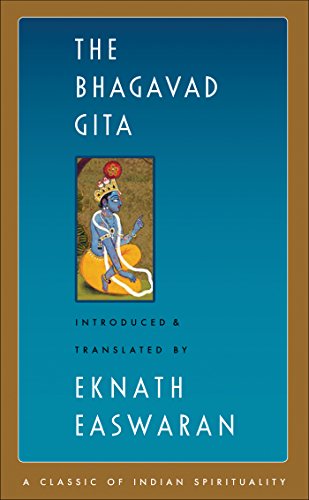 Easwaran’s best-selling translation of the Bhagavad Gita is reliable, readable, and profound. This is the book for an in depth study of the Gita. It contains information on the historical and cultural environment around the time it was written. The reader will find many more insights than this article can provide.

My source is the Bhagavad Gita translated by Barbara Stoler Miller. Many other translations exist but this happens to be my favorite as a straight translation, without getting into meanings and symbolism. The choice of extracts are by no means exhaustive and are simply my personal choices, others may find verses that resonate even more strongly. We may view the battle at Kurukshitra as an actual call to arms or we may see it as symbolic of the struggle within ourselves to conquer the darker sides of our own nature.
The final words of the Gita, "So I think." demonstrate the humility of the author. He states an opinion but does not add it to the canon. He admits this is how he thinks and though he wishes us to consider it, he does not declare his own words as being divinely written. The authors of ancient Indian texts will often state that this is how they understand what was said.
We should all have such humility.