The Cosmological Argument - God; the Uncaused Cause of the Universe. Aquinas

Jade is a graduate of Aberdeen University in Philosophy, Anthropology and Teaching.

God is the Possible Answer

The cosmological argument was developed by Thomas Aquinas from the belief that everything in the vast universe, with it millions of galaxies spanning across hundreds of millions of light years of space, and the universe itself had a cause. For everything in the universe we can ask what caused it?… but then we can ask the same of the answer and the same of all answers after that into infinity. The universe is thought by most physicists today to have been caused by the big bang millions of years ago but even for this we can ask what caused it. Ultimately there can be no definitive answer unless the question ‘what caused this?’ no longer makes sense. God is thought to be the possible answer.

Aquinas also thought that the universe must have been caused by something that was itself uncaused. This uncaused cause was to be called the ‘first cause’ because it was to be the cause of all else as it would start off the chain. Aquinas thought this cause which didn’t require a further cause was a description of God. His cosmological argument is made up of three separate arguments; the argument from change, the argument from cause, and the argument from contingency. The argument from change begins with the observation that nothing causes itself to change. Things around us only possess the potential to change but for this potential to be realised it must be met with some other thing which already possess that potential property. Nothing can be in the state of potentiality and actuality at the same time and so nothing can be self changing. In the case of animals which can move at will Aquinas believes it is another part of the creature which causes the change in the animal to be actualised. Each thing that changes is changed by something else but this can't continue into infinity unless met by something unchanged. This unchanged changer would be a being such as God. The second of these arguments is similar but relates to cause. Aquinas argues that everything and event has a cause. Nothing is able to cause itself as the cause comes before the event and so for something to cause itself means that it must exists before itself. This series of causes must have a first cause so as to avoid the causes stretching into infinity. This first cause is God but god does not merely exist at the start of the chain but throughout all causes as a form of sustenance - an efficient cause. The third argument, from contingency, says that what we see around us could possibly have not existed, and once did not. This refers to everything requiring a cause which need not have necessarily caused it to exist. Is all things follow this rule then there would once have been nothing at all. If everything requires a cause and there was nothing to act as a cause in the nothingness then there would still be nothing. Therefore, something must exist out with contingency to cause the universes’ existence at all. Such a being must be God. The cosmological argument as a whole follows a simple five point rule; everything has a cause, nothing is its own cause, a chain of causes cannot be infinite, there must be a first cause, and this first cause it God.

There are of course many criticisms of this argument. The most obvious of which was pointed out by Bertrand Russell. He questioned how it was that “everything has a cause” yet there “must be a first cause”. This however fall down as an objection as it is explained in the argument. It does seem that Aquinas is contradicting himself when satin there must be a first case after saying that everything has a cause because what would cause this first cause? The first three points of the argument present a problem of an infinite chain of cause. In order to overcome this problem Aquinas must reject one of the first premises and he rejects the first in favour of an alternative which allows at least one thing to exist without a cause in order for it to cause all else. Russell does have another objection which stands up more as he notices that there is a fallacy of composition in the argument. He notices that Aquinas is assuming that the universe itself requires a cause for its beginning leading to the possibility of a first cause - God. Just because all things in the universe require a cause for their beginnings does not mean that the universe as whole itself does. This is a fallacy of composition - when we mistakenly take the characteristics of parts of something as it they were the characteristics of the whole thing. Hume also criticises Aquinas’ cosmological argument saying that just because we don’t have experience of things happening without a cause foes not mean that everything requires a cause. As humans we learn through experience and Hume understands this but he realises that just because we haven’t experienced it doesn’t mean it cannot occur. Hume believes that God is a necessarily existent being but that necessary existence has no meaning to us as mere humans who can't fully understand Gods’ essence or nature. He believes God does exist but does not think that God is the ‘first cause’. If Hume is right then the premise ‘everything has a cause’ is false and as it is the basis for the cosmological argument then it must fall after it.

Many philosophers have pondered the validity of Aquinas’ argument and philosophised similar things. When asked about the possible explanation for the existence of the universe Bertrand Russell said “I should say that the universe is just there, and that’s all”. Copleston argues sufficient reason; he believes that “God is his own sufficient reason…” meaning God is in himself an explanation adequate enough for his own existence. Hume says “ if we knew his whole essence or nature…we should perceive it to be…impossible for him not to exist…” which is Hume’s view that God exist, he is a necessarily existent being. However, he goes no to say “it will still be possible for us, at any time, to conceive the non-existence of what we formally conceived to exist…” meaning that despite Gods need to exist, as humans we could decide that he no longer does as we don’t understand him. He continues to say that we cannot “lie under the necessity of supposing any object to remain always in being” thus we cannot assume that anything will always exist, even God.

In conclusion, the cosmological argument does give a rational basis for believing in God; however, there is no proof or certainty in the argument which would make it truth. Hume’s criticism, although fair, has as little proof as the cosmological argument itself has, if not less and so is not adequate enough to overthrow Aquinas’ views. Russell’s first objection doesn’t damage the argument but his second objection regarding the fallacy of composition does. This is not proof or reason for Aquinas to suppose that the universe as a whole required a cause, if there is to be an uncaused cause why can it not be the universe itself rather than the unknown being; God. Aquinas presumes that the universe must follow the same rules of cause as that which is in it. This presumption is not justified and so Russell’s attack of this does create a strong sense of doubt in my mind over the argument, but only in the respect of God. I agree with Aquinas that everything within the universe has cause cand doesn’t just happen and that things cannot cause themselves and also that the chain cannot be infinite. This would therefore mean there must be a first thing which causes the next and so on until what there is today but I don’t believe that this thing must necessarily b God as Aquinas assumes it must be. The possibility of God being the cause should not be excluded but it should not be assumed. Perhaps the assumption should be that the universe itself was the first cause or has just always been, the idea of God seems an unnecessary addition in the process when so little is understood as it is. Perhaps this is because I believe it should be this way because it is difficult to conceive of complete nothingness but maybe this is so difficult to conceive because it has never been. 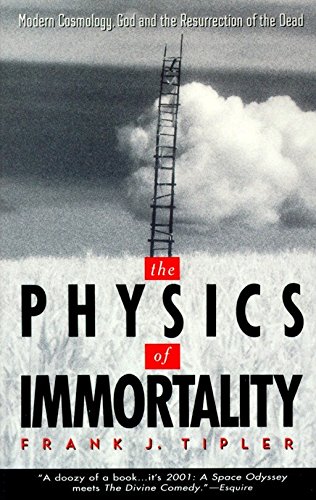 The Physics of Immortality: Modern Cosmology, God and the Resurrection of the Dead
Buy Now