The Ghost Faces Of Belmez - And A Spanish Mystery

It was a normal day in the house in Spain. María Gómez Cámara and the rest of the family were all out, but the grandmother and grandson were just sitting in the kitchen in their home in a small village when all of a sudden, the child yelled out in excitement.

Grandma! He screamed, 'Look!' And the old woman stood up and went over to the child to see what had happened. At that moment her life changed forever.

What she saw absolutely terrified her!

The beginning of this unbelievable story began in the sleepy village of Belmez, not far from the city of Cordoba Spain, it was a hot sticky morning in August 1971. Nothing unusual happening just people going about their daily business.

Children went to school, parents to work or staying at home, and nothing much out of the ordinary.

Until this morning when a small child called his grandma.

So, what did they see?

There, on the floor in the kitchen, was a face. It was human, and it had spontaneously imprinted itself on the floor tiles!

A sad face, with tired features. On closer inspection there was no sign of any pigment or paint, and it hadn't been there a few seconds earlier! So what was it? And how on earth did it get there?

When the family all tried to get rid of it by rubbing it out, they were horrified to see the face change expression! They eyes seemed to open, and the mouth fell into a scream!

The only thing they could do was tear up the tiles around and on the picture and throw them out. Juan Pereria and their son, Miguel even destroyed the images with a pickaxe to make sure that the ghostly images couldn't come back. 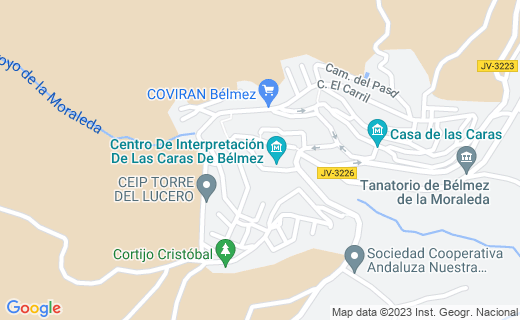 He tore up the whole of the kitchen floor and laid concrete down instead.

But three weeks later, after the family came home from work, there on the floor once more was another face! And this one was far more defined!

The whole thing was getting out of hand, and the family were beginning to get really scared. Soon after they got in touch with the authorities to see if they could figure out what on earth was going on!

They ordered that the section of floor that kept showing the faces, be removed and then they would order an official inquiry.

When workmen dug up the floor they made a disturbing discovery. The remains of a Medieval cemetery were right underneath their house!

What the uncovered shocked them to their core. There were skeletons, some decapitated, others just lying at rest underneath their floor.

After completely digging up the floor and laying concrete down they believed that the problem would stop. And the ghosts would disappear. But it wasn't to be.

Meanwhile, another ghostly apparition took place, then another, then a series of faces appeared on the floor!

The kitchen was then locked and sealed. Nobody was allowed in. But still four more faces appeared, including that of a woman who mysteriously appeared in another part of the house!

But that was to be the last for the moment. The phenomenon melted away as quickly as it had appeared. Or had it?

While all these ghostly goings were being investigated they couldn't find anything to suggest foul play.

Even the most cynical of them were unable to prove that the images were the work of human hands.

They even planted microphones around the house to see if any noises could be heard, or catch someone stealthily trying to paint secretly on the floor.

What they didn't realize was that something else just as terrifying was about to happen!

The microphones did record sounds, but they were not really audible to the ear. The voices spoke in strange languages with agonized moaning and the torment in the eyes showing in the ghostly floor paintings.

Word soon spread around the small village, and people starting to come to the house to take a look at the strange phenomenon.

Some fell to their knees claiming it was a sign from God. Others believed it was their ancestors coming back for reasons unknown to them.

Either way, the family became inundated with hundreds of villagers wanting to know what was going on.

By now the news of the ghostly Belmez faces had spread far and wide. Journalists, Priests and Paranormal investigators descended on the small town.

The German investigator Dr. Hans Bender declared that it was 'The most important paranormal occurrence in the 20th century!'

Soon a full scale search and investigation started. People were brought in from all over the world, including the Spanish institute for ceramics and glass.

They mapped out the floors, photographed everything that was relevant and then covered the whole floor with cloth and sealing wax to stop anyone tampering with it.

A local notary stood guard to make sure everything was done properly.

They left it like that for a few months, checking occasionally to see if it had been tampered with. Until eventually they took away the cloth and looked at the floor.

And there, in full view of everyone of the witnesses they could see the proof.

The faces had indeed moved and transformed!

Since that day many investigators have tried and failed to find an answer. Many believe that its fake, and probably made by Maria's son, Diego Pereira,

Even years after the event many people came to see the phenomenon. And there was speculation that it was all done as ruse to earn money, as the family were pretty poor.

Some believed, others thought it was fake. But there was another idea that could possibly be the answer to these amazing ghostly faces

The thought form hypothesis is based on old mysticism or something called Tulpa.

Tulpa is a concept of either an object or person being brought to 'life' by thought. This may sound strange, but in fact this idea has been around for hundreds if not thousands of years.

In the case of the Belmez ghosts some believe that Maria was so desperate to earn money, and or being overly religious in her faith that somehow she brought these ghost paintings or pictures to life.

The word Tulpa is taken from the Tibetan word to construct or build something. The strange thing is the fact that for centuries nobody knew about atoms or quantum physics and yet they believed it was possible. Now with our knowledge of the physics it may just be possible.

Either way the floor ghosts are not easy to dismiss.

In a strange twist, when Maria Gomez died in February 2004 at the age of 85 they believed that the thought forms, ghosts or whatever they called them would fade away. But evidently that wasn't so.

A psychic researcher named Pedro Amoros tried to see if there were any more floor ghosts or thought forms, which resulted in a new wave of faces appearing.

But this time it was more or less proved to have been faked by him. It doesn't say why or how they proved he faked them, but it does prove one thing.

The original Belmez ghost faces were authentic! There was never any real proof however hard they tried to find fakery of any kind, that the original ghosts were anything else than real!

Spooky Twist in the Tale!

To this day nobody really knows whether the Belmez Ghost faces were real or not. They had been checked over and over again to see if the floor had been painted. The couldn't find any proof of paint. So they turned their minds to other types of chemicals.

But still to no avail. Of course this doesn't say this is real or fake. The problem is that it doesn't prove it one way or another. The spooky thing about the ghost faces is that when they pulled up the floor there was a graveyard underneath as mentioned above. How would they know that? The cottages had been there for many years, in fact its possible that they were built at least 100 years before!

That makes it all the more plausible that the story is true.

But this is not the end of the story!

After Maria's death, the ghost faces faded from her house. Only to reappear in the house where she was born!

Faith is much better than belief. Belief is when someone else does the thinking!

Are the Belmez Ghost Faces Real Or Fake?