Ethiopian Christianity Part 3: Were Solomon And The Queen Of Sheba Romantically Involved, and Did She Bear His Son?

The history presented in the Kebra Nagast begins with a romance between King Solomon and the Queen of Sheba during her visit to his court in Jerusalem. Ethiopia’s ruling dynasty claims descent from Solomon and Sheba’s son, Menelik I. Twenty years later, on a visit back to meet his father, Menelik’s caravan spirits away the Ark of the Covenant, the sacred object that Solomon built his famous temple to house, and which Ethiopia still claims to possess.

What evidence exists outside the Kebra Nagast that Solomon had a romantic relationship with the Queen of Sheba? In both Africa and Arabia, the existence of a person called “The Queen of Sheba” is documented in ancient stories and artwork. The Bible includes a fairly detailed description of her visit to Solomon’s court. Outside the Bible, Sheba is explicitly described as Solomon’s lover, sometimes his wife as well, while the Old Testament drops hints but does not commit itself to a definite relationship beyond royal friendship. At the end of this hub I add some speculations of my own about this legendary pair.

Arabic Traditions of Solomon and Sheba

In the Koran the Queen of Sheba’s given name is Bilquis, and the Muslim tradition adds the detail that her journey to visit Solomon was not her own idea, but prompted by an invitation from him. As a wise man and a prophet, Solomon aims to convince the queen to worship the One God rather than worshipping the sun. This seems to suit the Arab view of females, even queens, in need of male guidance. Only this tradition mentions the marriage of Bilquis to Solomon, again perhaps a nod to Arab mores. While the story differs in some details, an Arab tradition including not just a meeting between Solomon and this foreign queen, but an established romantic relationship, supports the idea that this story has some basis in fact, and is not only an invention of the 10th century Ethiopian monarchy. A late date for the Koran places its writing about 750 AD, and many claim earlier dates.

The Kebra Nagast, by contrast, presents the Queen of Sheba as a strong personality in her own right. She rules Ethiopia, and her name is Makeda. Her foot had been deformed in an encounter with a dragon when she was a girl. Though a wealthy and powerful ruler, she values wisdom more than anything else, and when she hears of the wisdom of King Solomon, she decides she must see him for herself. Solomon welcomes her, and as she steps across the threshold of his palace, her cloven foot is miraculously healed. (The Arabian version differs here – the queen’s deformed foot turns out to be an unfounded rumor, and Solomon is relieved to see her two perfect feet as she lifts her hem to step over his threshold.) Solomon spends plenty of time with his visitor, imparting his wisdom. Makeda is grateful, but at last says she must return to her own country. Solomon talks her into one last dinner at his palace, then into sleeping in the same room with him, and lastly trips her up with some verbal gymnastics and tells her she is now committed to come into his bed. The next morning she leaves: she gives birth to Solomon’s son back in Ethiopia. 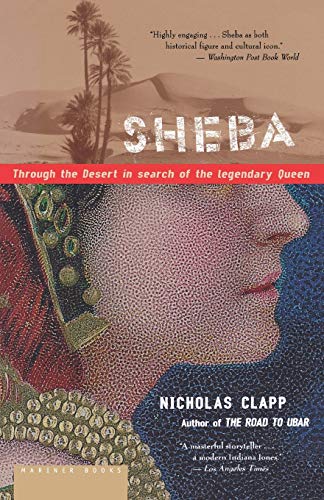 Sheba: Through the Desert in Search of the Legendary Queen

The many different stories about the Queen of Sheba, including both historical information and how she has worked her way into movies and popular culture.

Solomon and Sheba in I Kings Chapter 10

The Old Testament’s version of the Queen of Sheba’s visit makes no mention of Solomon and Sheba spending the night together. Taken at face value, the account describes the meeting of two highly intelligent sovereigns, who part with mutual regard. But read through the passage, and the romantic if not sexual overtones are impossible to miss. “When she came to Solomon, she spoke with him about all that was in her heart. So Solomon answered all her questions; there was nothing so difficult for the king that he could not explain it to her.” Solomon was no fool, and what better way to woo a woman both powerful and intelligent? Solomon’s effect on the Queen is described: “And when the Queen of Sheba had seen all the wisdom of Solomon…there was no more spirit in her.” This can be taken as being stunned by the depth of Solomon’s insight, or perhaps she was swept off her feet. They exchange expensive gifts, and the text notes, “Now King Solomon gave the Queen of Sheba all she desired, whatever she asked, besides what Solomon had given her according to the royal generosity.” Though Solomon outdoes Sheba in monetary value, the book of I Kings praises her gifts for uniqueness. The man has more “strength” while the woman is more “special,” a good description of the balance of power between lovers. The text continues, “There never again came such abundance of spices as the Queen of Sheba gave to King Solomon.” Given the Old Testament association of spices with sexuality, now the double entendres are really flying.

So is the Bible saying Solomon and Sheba were lovers? Certainly not directly. And flirtation between sovereigns is hardly surprising. Queen Elizabeth I was a famous flirt: she favored handsome male courtiers who flattered her and were great dancers. She more than hinted at the possibility of romance and marriage with visiting single kings. But while she might dress to the nines, bat her eyes and keep the court up half the night dancing, she also guarded her reputation as the Virgin Queen. “I will have only one mistress, and no master,” she said once of her prolonged singleness. All this is to say, a single queen can use beauty and sexuality to enhance her power, but she is on a slippery slope if she gives in to seduction. Henry VIII had any number of public mistresses without diminishing his political power: the rules would be different for his daughter Elizabeth, who at least publicly would have to content herself with flirtation.

The Old Testament’s account of Sheba’s visit may be romantically charged, but the Queen departs with dignity, rather than with an announcement that Solomon finally got his way with her. Is the silence because nothing happened? Is it because Solomon developed a chivalrous amnesia? Was a sexual relationship only hinted at because Solomon would look a little sleazy if he had to bed every unmarried woman in the city, even dignitaries? Was the respect aimed at the Queen of Sheba, a potentially powerful ally?

My Own Thoughts About Solomon and Sheba

When I first read of a child between Solomon and Makeda, I confess I thought myself into her shoes, and it all made perfect sense. There was a third possibility to the diplomatic flirtation of the Old Testament, and the sexual manipulation of the Kebra Nagast: what if Sheba had a baby in mind from the beginning? She needed an heir, didn’t want a husband, and couldn’t turn up pregnant by just anyone. But what if she returned home with the child of a powerful king, a king conveniently too far away to interfere with her life? Is it possible, I thought in my own devious mind, that not only does the Old Testament politely not tell the whole story, but what if the Kebra Nagast is also presenting an “official” version of what happened?

To use the example from above, Queen Elizabeth had a similar dilemma. If she married, her power diminished. If she took a lover, her subjects wouldn’t respect her. But where could she get an heir? In Elizabeth’s case she never did, and the throne of England passed on her death to the Scottish King James. In contrast, the Kebra Nagast has the Queen of Sheba returning to Ethiopia carrying the child of the most respected king of her time. This neatly solves the biggest practical difficulty in her life, and founds a dynasty that lasts three thousand years.

In my own reflections, the best course would have been for Makeda to confide in no one, wait to see how events played out, and maintain plausible deniability. The journey could always be explained as a quest for wisdom. She would want to spend some time with Solomon, build rapport, consider her plan. To maintain her dignity, he must make the decisive move. She needed to be not just seduced, but “tricked.” After all, this wouldn’t really be held against her: everyone knew Solomon’s reputation as the shrewdest negotiator in the world. As long as she put up a decent amount of resistance, her reputation wouldn’t suffer too much. She may have reflected that many would quietly triumph in Solomon outsmarting a powerful woman, while still sympathizing with her as the victim of a superior intellect. If all went according to plan, she would head home in possession of both her independence and an heir to her throne.

The above of course, is entirely an invention of mine. Neither text imputes motives of this calculating sort to Sheba’s 1,400 mile journey. I just wish Elizabeth had had such an alternative.

This series will continue with more exploration of Ethiopia's Christian heritage.