The Legend of Loftus Hall: An Irish Ghost Story

Gabriel lives on an Island. A beautiful small Island that enjoys a warm climate and beautiful landscapes.

Perhaps it is because an ancestor of mine had the maiden name of Redmond that I was told this story many times as a young child. There are many versions I'm sure, however this version is one that has been told from father to son and mother to daughter, over hundreds of years.

A family by the name of Redmond built a beautiful castle to be their new home in the southeast of old Ireland at The Hook Peninsula. The year was 1351. The reign of The Black Death was coming to a welcomed end. Their new home 'Redmond Hall' was to bring great joy and a budding future...

Three hundred years later (1651) The Redmond Family were subjected to the horrors of Cromwell and his army. Their beautiful home the target of cannons. The Redmond Family lost their castle and their lands when defending efforts to save their home were defeated. Redmond Hall was finally conquered by Cromwell's army.

The castle became the family home of The Loftus Family. Redmond Hall was now Loftus Hall. A daughter, Anne, of the Loftus Family married a man by the name of Tottenham and they had two daughters. Anne and Elizabeth. Happiness was not to be theirs and when their daughters were very young, Tottenham's wife Anne died. Tottenham took another wife to assist in the bringing up of his daughters.

Over the years many ships landed on the shores of the peninsula and it was customary for their occupants to take shelter from storms at the great Hall. It was during one of these many storms, that one such ship landed on the shores and took shelter at Loftus Hall. The days turned to weeks. The rain fell with a vengeance from the heavens. Great purple clouds rolled across the grey sky.

Among the visitors was a young man. He became very taken with Tottenham's daughter Anne. They would spend hours in the tapestry room talking. They longed for the rain to stop so they might take a stroll along the peninsula. The young couple became very close. The long dark evenings were spent playing cards by the fire in the large drawing room. The men played at one table, while the ladies of the house played at another.

One night it was particularly cold and both the men and the ladies moved their tables closer to the fire. Anne dropped a card and bent to pick it up. As she reached for the card her fingers brushed against something smooth and hard. Anne leaned further under the table only to see what looked like an animals hoofed foot. Jumping up; she sent the men's table flying. Exposing the young man as the owner of the hoofed foot. Every one screamed. ''It's The Devil.''

Tottenham who had been sitting at the far end of drawing room called for order. Finally everyone calmed down. That's when they realized the young man had disappeared. A cold breeze with an icy chill descended on the room. Anne looked up to see where the chill came from. And there in the roof over the very chair the young man had sat upon was a great gaping black hole surrounded by a smoky cloud.

The story goes that Anne unable to believe that her love was a demon or indeed The Devil himself, locked herself away in the tapestry room where she starved to death. It seemed the Loftus family were to know no happiness.

Anne's ghost was often seen wandering the hallways before disappearing into the tapestry room. Many sightings of her ghost fueled numerous stories of the haunted Loftus Hall. Unusual activities were blamed on poltergeist, encouraged by the returned visit of the young man with the hoofed foot or as he was better known 'The Devil'.

Eventually all the servants left. A catholic priest was finally called in at the request of the family to exorcise the building. Though the exorcism seemed to calm the worst of the haunting it never truly stopped. As was the hole in the roof never truly repaired no matter how brilliant the workmanship.

The Hall was knocked to the ground and completely rebuilt by the 4th Marquess of Ely in 1870. It is said part of an original corner foundation still remains and an underground tunnel survives to this day.

The Legned of Loftus Hall: an indept account of an Irish ghost story... 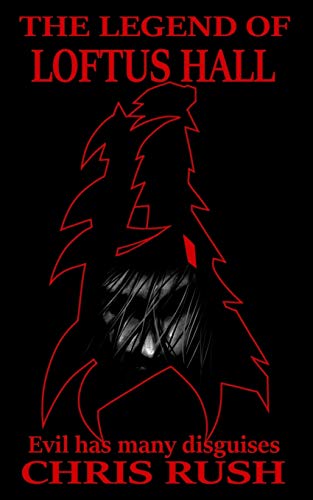 A Stroll Along The Peninsula

It was late afternoon; the sea breeze long gone engulfed by a cold wind. An eery silence settled about The Hook Peninsula. The fringed lands seemed to dissolve like searching fingers into the dark grey sea. The local fishermen and visiting walkers had left long ago. The dark purple clouds rolled in the sky. A storm threatened to full fill a promise of forecasted rains.

''I think it's going to rain,'' the young woman said reaching for her lovers hand. ''Perhaps we should leave,'' she added. Her lover; a tall, handsome man took her hand and smiled.

''You always hate the rain: why?'' he asked. The young woman turned to face the old mansion in the distance. Tightening her grip on the young mans hand she smiled back.

''It's not the rain I hate my love, but the memories the rain brings with it.'' Her pretty face was tarnished with melancholy. The young man followed her gaze to the old mansion. It stood like a lonely stranger, waiting for it's companions. A deep sadness seemed to cloak it's stone walls; misery seeped from every crack.

''Yes, indeed. Perhaps tomorrow the rains won't come and we can take a stroll along the peninsula.'' The young woman said wearily.